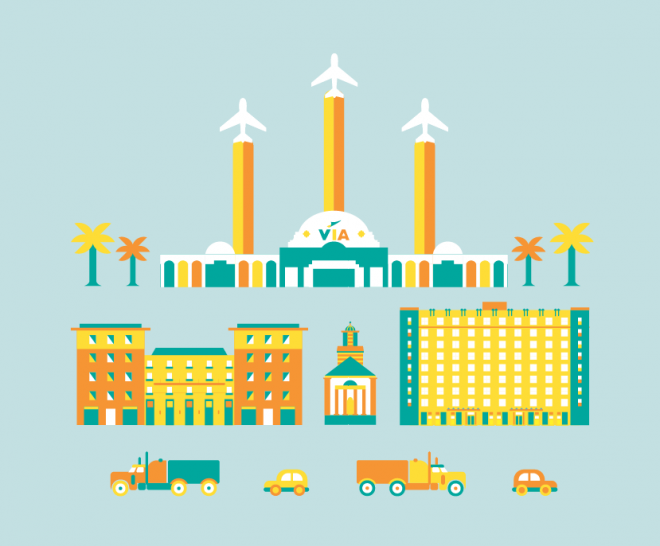 Known as the Harlingen Aerotropolis, the plan is a multifaceted economic development approach using a relatively new airport business model to meet the demands of the future, including the growing aerospace industry in South Texas.

“All airports are trying to reinvent themselves to diversify revenue streams,” VIA Aviation Director Marv Esterly said.

“Our top priority is airline service and we want to make sure our rates are low for air carriers,” he said. “The aerotropolis is really an answer to that. It spreads the cost beyond the airlines.”

With only four major air carriers dominating the market following years of mergers and acquisitions, the competition for air service is as tough as ever and airports need to make adjustments in the way they do business to remain viable.

Already the Valley’s busiest air cargo center and the second-busiest passenger airport, VIA is in a unique position to tap into the growing aerospace industry in South Texas as well as other air-related companies.

Fields of cotton and grain sorghum adjacent to VIA could one day give way to a diverse economic development complex. The airport owns 480 acres of that farmland and the basic infrastructure to make it “shovel-ready” for development is already in place.

“The basics are there and it’s ready to go,” Esterly said. “All the utilities are there, everything they need to start, so all they have to do is get a building permit.”

At the time the certification was issued, Lindsey Myers, senior consultant and director of site readiness programs for McCallum Sweeney, said that shovel-ready communities have an upper hand in attracting new business.

“Companies are not willing to wait for a community to find an appropriate site and determine its suitability for development. That due diligence needs to be completed in advance of a prospect visit,” she said. “The Harlingen Aerotropolis at Valley International Airport is the first certified site in the entire state of Texas using AEP’s Quality Site Program.”

The aerotropolis concept is designed to attract air-related businesses such as companies that frequently ship and receive parts and goods by air, light commercial, as well as organizations that could locate headquarters near an airport for the convenience of doing business and travel.

“And we definitely want to bring in high-tech,” Esterly said.

With United Launch Alliance well-established at VIA manufacturing and assembling rocket components and the arrival of the SpaceX launch facility in Cameron County, the aerospace industry is a prime target for Harlingen Aerotropolis.

Esterly described ULA as a “cornerstone business to attract related businesses” such as other component manufacturers and payload companies.

Part of the idea behind an aerotropolis is to create a diverse planned business community that could include residential areas for company executives and workers as well as restaurants and retail.

There is more than the 480 acres of shovel-ready farmland behind the vision. The fact that VIA operates independently as a self-sufficient airport with its own board of directors gives it an edge in being able to move quickly in the quest to develop the Harlingen Aerotropolis, Esterly said.

Its central location in the fast-growing Valley, proximity to the Port of Harlingen, and easy access to major highways, railroads, and international bridges also combine to beef up the credentials of the aerotropolis.

VIA has also reached out and created partnerships within the Harlingen community to help plan and market the aerotropolis concept.

The Harlingen Economic Development Corporation came on board to assist with marketing Harlingen Aerotropolis, providing consulting and the production of a video touting the project for prospective tenants.

Texas State Technical College, with its campus right next door to the airport, is another partner, with many of its students already hard at work to develop marketing materials and plan potential projects.

TSTC engineering students have been involved with designing a 3-D computerized prototype of what the aerotropolis could look like and the types of buildings that could occupy the 480 acres.

At the north end of the airport stands an old concrete building that once served as a military jet engine testing facility before it was abandoned in the 1970s. The one-foot-thick steel reinforced concrete walls contain four testing rooms and two control rooms that are now sort of a laboratory for TSTC students to develop ideas on how to upgrade and repurpose the building as a modern propulsion test center.

The student involvement provides yet another selling tool for the Harlingen Aerotropolis.

“A lot of ULA workers are already coming right out of TSTC,” Esterly said. “We can tell prospective tenants: Here’s where a lot of your employees will come from. That’s always a big question we get asked.”

As the farmers harvest their summer crops, the people behind the aerotropolis are developing marketing tools and reaching out to explain the vision to prospective customers by visiting trade shows and contacting companies to explain what Harlingen has to offer.

“We make sure we have all the feathers in our hat when we go visit companies,” Esterly said. “Right now is getting the name out, getting the word out. It’s a long process, but if you don’t do anything, you are always at square one.