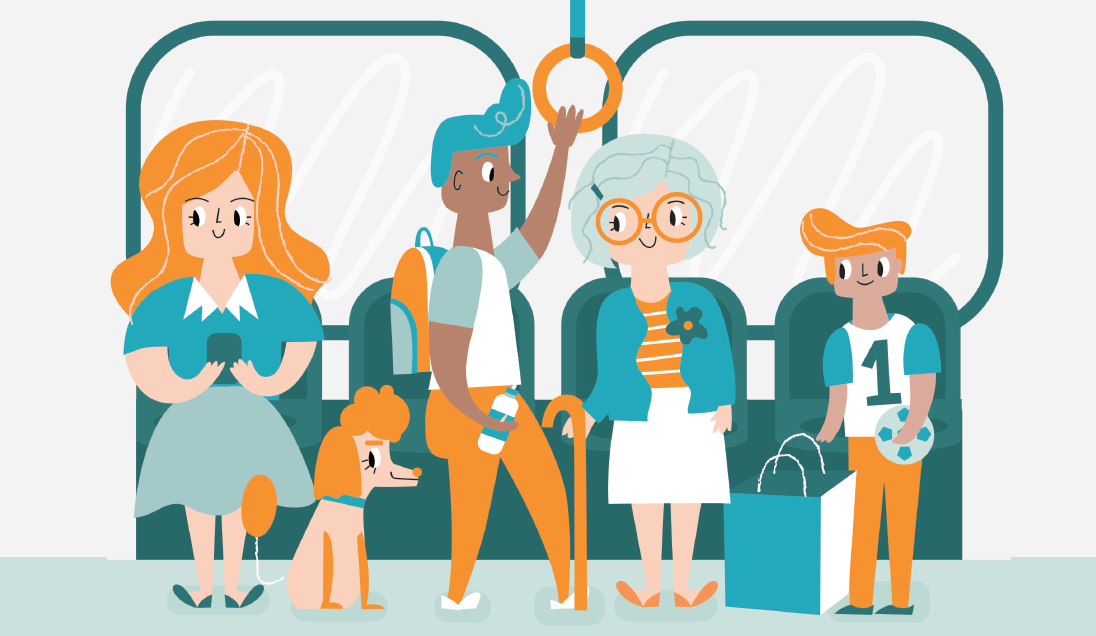 Note from the editor: In the printed version of this article, distributed Sept. 13, 2016, we made some mistakes which may confuse readers: The article was incorrectly titled ‘McAllen Metro,’ however this is a completely distinct service that does not provide Valley-wide transportation as Metro Connect does. The new headline, “Metro Connect”  is the correct one for this article. Additionally, the printed version incorrectly states that seniors and students may ride the McAllen Metro for $1. While students and the elderly may ride McAllen Metro for $.50 with proper identification, Metro Connect’s student discount is $25 for a 30-day pass that takes you from McAllen to as far as Port Isabel. Anyone may purchase a $5 daily pass for unlimited use of Metro Connect’s three lines that day.

If you need to get around in Rio Grande Valley and don’t have your transportation, or you just don’t want to get behind the wheel and navigate the sometimes treacherous freeway traffic, you can join the growing numbers of people opting for the express bus service of Metro Connect.

“In recent years we saw a need for regional routes to give people up and down the Valley an easy way to get around,” said Mario Delgado, transit director for the city of McAllen. “We worked with our counterparts in Brownsville and South Padre Island and decided that an express regional transit service was the best way to go.”

The municipal partners put together a plan and applied for funding and in May of 2013 received a $1.4 million grant from the Texas Department of Transportation as part of the Federal Transit Administration’s Section 5311 Non-urbanized Area Formula Grant Program, which provides states with funding for intercity bus service.

Add to that $350,000 in local funding from the three cities and it wasn’t long before Metro Connect buses hit the road.

“It started pretty quickly,” Delgado said. “A lot of the planning had already been put in place during the grant process since you have to have a detailed proposal in place. We just had to line it all up and get it ready to go.”

Service started in November 2013 with up to four buses on the road at any given time from 6 a.m. to 9 p.m. seven days a week, Delgado said.

“We started with three routes,” he said. “The main lineto get you across the Valley is the Red Line with twobuses in service daily.”

One bus originates in McAllen and the other inBrownsville and they loop around the Valley with Harlingen and at the RGV Premium Outlets mall in Mercedes. The buses stop in Harlingen at the Valley Transit Company terminal in the downtown area.

The Green Line operates between the Central Station in McAllen and the University of Texas Rio Grande Valley campus in Edinburg, a service that runs Monday through Friday. The Green Line also stops at the McAllen Public Library.

The Blue Line runs back and forth between the multimodal terminal La Plaza in Brownsville and Port Isabel, where passengers can connect to the Island’s bus service. There is also a stop at the Brownsville-South Padre Island International Airport.

The terminal stops in McAllen and Brownsville allow passengers to easily switch to the local city bus service to get around those towns.

Metro Connect appears to have found a niche in the Valley transit scene, with ridership that has seen steady growth from the beginning.

“It’s been received well,” Delgado said. “The ridership has grown every year from 2013 to now.”

Even with growing ridership numbers Metro Connect, like most public bus systems around the country, does not generate enough revenue to make it self-sustaining.

“We feel the service is needed and we were able collectively to make it efficient so the local investment could be minimized and we could take advantage of federal and state subsidies,” Delgado said.

But the express service does provide an inexpensive way for Valley residents to take the ride.

Metro Connect also offers passes that make it even more cost-efficient for the passenger.

A daily pass that allows unlimited use of the three Metro Connect lines is available for $5, and a $10 daily pass can be used to connect with routes on Metro McAllen and Brownsville Metro. (The Island bus system operates free of charge.)

Frequent riders can purchase an unlimited 30-day Metro Connect pass for $90 and a universal pass for all the systems for $100. A 30-day pass for students and faculty with a valid ID is available for $25.

More information on Metro Connect routes and fares is available online at rgvmetroconnect.com or by calling 956-681-3550. 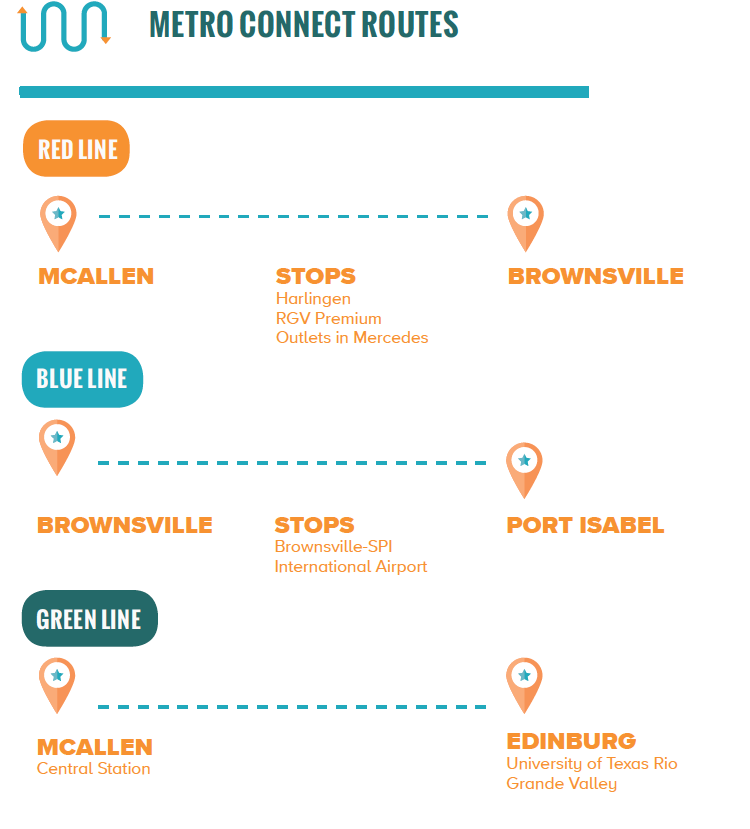 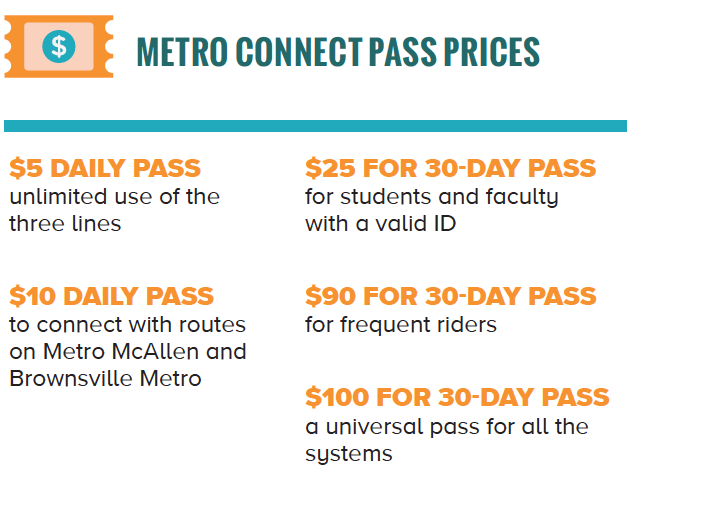