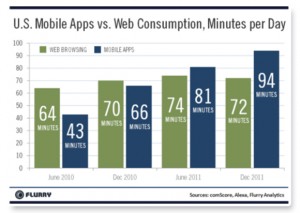 The world is moving fast, and so is technology. What yesterday was a luxury now has become a need. The market has been adapting to changes in lifestyles and forms of communication and people are demanding products and services that adapt to those needs. With the fast growing of the population in the valley, a 63.4% increase over 1990, according to the 2008 Census, the demands for medical services has increased and people are seeking for the highest quality and expertise of physicians and healthcare providers. According to the McAllen chamber of commerce, hispanics represent from 83% to 87% of the Rio Grande Valley population; residents under 35 years of age make up between 50% and 60%. The population, although diverse, is defined by two dominant demographic criteria: Hispanic and young.

One of the markets that have lately been growing at a rapid pace is the mobile market. According to Microsoft Tag, of the world’s 4 billion mobile phones in use, 1.08 are smartphones. Also according to Nielsen the 3 major Smartphone platforms are iPhone, Android and Blackberry, within which Android and iphone will continue to remain at the top of the smartphone market and consumer interest levels.

On the other hand, Flurry Analytics published a report detailing how the average smartphone user, for the first time ever, began spending more time in their mobile applications than they do browsing the web. According to this report, smartphone and tablet users now spend over an hour and half of their day using applications. Meanwhile, average time spent on the web has shrunk, from 74 minutes to 72 minutes. Users seem to be substituting websites for applications, which may be more convenient to access throughout the day Microsoft Tag also presents the following statistics concerning mobile usage: One half of all local searches are performed on mobile devices, Americans spend 2.7 hours per day socializing on their mobile devices, over, 1/3 of Facebook users use Facebook mobile, and 50% of Twitter users use Twitter mobile. Also women among 35 to 54 are the most active group in mobile socialization, and among the main things people use their mobile phones for are games, weather, maps, searches, and social networking.  Furthermore, according to Facebook statistics, there are around 379,480 users in the RGV area within 14 to 65 years old. From that number, 229,760 are in one of the categories: Android, iPhone or iPad.

This statistics reveal a new marketing opportunity to explore for businesses to get in contact with consumers and develop relationships that result in a long-term investment that encompasses return on engagement. An example of a local company that has recently emerged in response to those needs is TMS (Technologic Marketing Solutions) with their product “The Medhood”. The Medhood, which stands for The Medical Neighborhood, is a free app for Iphone, Ipad, and Android, as well as a webpage that serves the medical industry of the RGV area, enabling users to search for their desired medical services. The Medhood combines search functions, maps, interactive elements, and social networking in a single app, making it a great marketing opportunity for healthcare providers to try and a useful tool for the community. You can visit www.themedhood.com to learn more about this new product or download it for free on the App Store and Android Market.

As for what’s expected for the apps market in the future, a recent survey by tech trend site GigaOM has suggested that the US mobile applications market will grow from $6.8bn in 2011 to a huge $25bn by 2015. The change has begun and is centered on the fact that investment in mobile applications and advertisement is not to be left to the daring few, but has become a channel most serious businesses have to utilize for marketing.