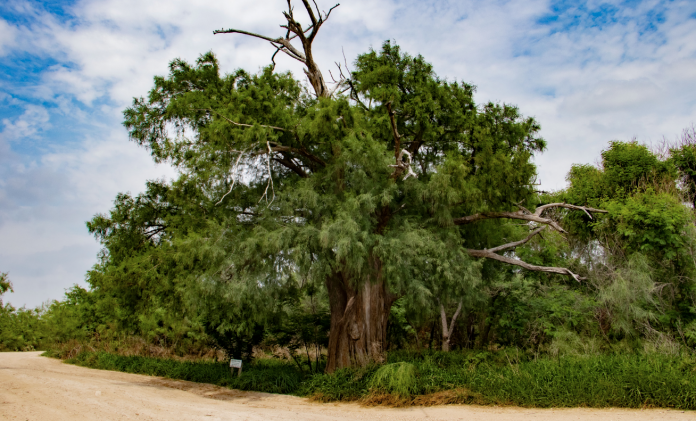 Our South Texas climate is no joke, but you shouldn’t let that stop you from having exciting adventures outdoors. The RGV is full of history in architecture, culture, or in this case, nature.

This is the second part of the Visit the Valley series and this time, we will explore a tree that is older than the nations of Mexico, Canada, and the United States combined.

The Montezuma Bald Cypress of Abram, Texas, near the Rio Grande, is 900-plus years old. If trees could talk, it could tell thousands of stories. Tales of empires, natives, conquest, settling, and today, a vibrant Rio Grande Valley on the border.

Studying these trees and the reason they are so far north from Central and Southern Mexico, where the Aztec civilization was centralized, can open a world of discovery and history.

“A lot of the people in the Valley tend to overlook a lot of the beautiful natural things that are here,” said local historian, professor and organizer Ruben Flores. “Very few people know about El Sal Del Rey or the Ahuehuete tree. That’s part and parcel with it.”

The tree is near the border, behind a steel gate built by the federal government but still accessible to residents — albeit with some border patrol presence. Making a trip to see this special piece of nature is something that’s hard to forget, especially with background knowledge.

These Bald Cypresses (taxodium muctonatum) were commonplace in the Aztec Empire. The largest tree of its kind is located in Oaxaca, but the tree in Abram shows the extent and migration patterns of the empire. They can be found in many parts of Southern and Central Mexico.

“When I first heard about the one in Abram, I was excited,” Flores said. “It’s smaller [than Oaxaca’s] but it’s the same type of tree. The Aztec saw it as a symbol of government, so they planted it throughout their kingdom and that included here. They traveled up north to El Sal Del Rey to get salt.”

Flores said that he has been fascinated with these trees since he traveled to Santa Maria Del Tule in Oaxaca to see the Arbol del Tule, or Ahuehuete.

“If you see the redwoods in California, you stand there and you’re in awe,” Flores said. “It’s that same feeling when you see the Ahuehuete — it’s immense. It is literally the largest living thing on Earth. It can be compared to the Blue Whale — it’s even bigger. The circumference of the tree is as big as it is tall.”

Central and Southern Mexico are home to many of these Aztec-planted giants that were a sign of political, social and agricultural prowess. Montezuma is the name of the final ruler of the great Aztec empire that stretched into modern-day America and south to Honduras and Nicaragua. He is known for this period and his confrontations with conquistador Hernan Cortes.

Cortes is said to have cried under the tree in Santa Maria Del Tule after being chased out of Tenochtitlan (Mexico City) by Mexica forces.

Research says these trees were planted alongside the advanced agriculture systems of the indigenous people. The resin was said to be used to treat gout and ulcers, the bark boiled to promote menstrual and bladder health, while the leaves were used to stop itching.

Flores says that in order for the tree in the Valley to be protected, it would be wise to designate the tree as a historical marker. This would preserve the giant from destruction or construction.

“The first thing we plant when we take over a region is a flag,” Flores said. “What did we plant on the moon? We plant flags, they planted trees.”