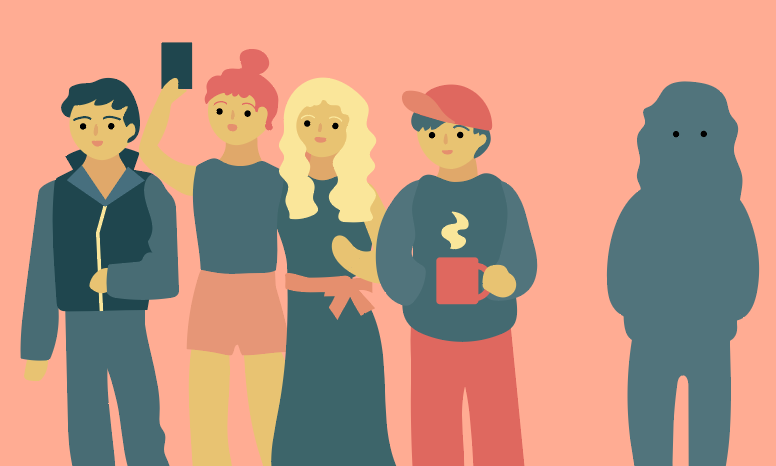 One of the most common forms of anxiety disorders, social anxiety disorder is invisible to the eye. To those who suffer with it, it is a crippling fear that keeps them from participating in most kinds of social situations not for lack of want, but from the sheer fear of embarrassment or judgment from others.

Social anxiety disorder, according to the Anxiety and Depression Association of America, is “the intense anxiety or fear of being judged, negatively evaluated, or rejected in a social or performance situation.” It can be brought on by any number of risk factors, “including genetics, brain chemistry, personality and life events,” the ADAA states.

It may be more common than you think.

ADAA.org states that anxiety disorders are the most common mental illness in the U.S. today, affecting 40 million adults age 18 and above (not including children and adolescents), or 18.1 percent of the population. Of those with social anxiety in particular, even though effective treatments are widely available “fewer than 5 percent seek treatment in the year following initial onset and more than a third of people report symptoms for 10 or more years before seeking help,” the ADAA says.

This could be due to a number of factors, including mental health stigma, or discrimination against those with mental health problems.

According to mentalhealth.org, even though a large percentage of our population is affected with various forms of mental illness, “there is a strong social stigma attached to ill mental health, and people with mental health problems can experience discrimination in all aspects of their lives.” In fact, “nearly nine out of ten people with mental health problems say that stigma and discrimination have a negative effect on their lives,” mentalhealth.org states.

Society has formed negative stereotypical views about mental illness and the ways that it affects people. This is the unfortunate reality for those with social anxiety disorder — a population that is already hyper-sensitive and painfully aware of judgment and rejection from others. This may make it more difficult for social anxiety sufferers to seek help, but help is available to those who look for it.

At what point should someone with social anxiety disorder seek professional help?

“A big part of social anxiety disorder is avoidance,” Marez said. “They’ll go to great lengths to avoid social situations, they seek jobs where they don’t have to be around people, they won’t go to school to avoid doing group projects or presentations to the point where they may end up failing classes, they’re unable to make friends or have intimate relationships with others.”

There are several treatment options available. One of the most effective first lines of treatment, according to Marez, is cognitive therapy from a licensed therapist. “Cognitive behavioral therapy has been the only type of therapy to prove effective in permanently alleviating anxiety disorders and depression,” the Social Anxiety Institute states on its website, socialanxietyinstitute.org. The website also states cognitive therapy can cause “permanent changes in the brain’s neural pathways” to help turn irrational thinking into rational thinking and ultimately, effectively changing behavior patterns.

Marez said in addition to cognitive therapy, another form of therapist-guided treatment is exposure therapy.

“This involves a lot of active work for the patient. Their treatments will put them in uncomfortable situations that gradually increase in intensity,” Marez said. “The therapist will have them do exercises like calling a business to ask for the store hours, then going in person to talk to someone, then building it up gradually with a lot of support.”

Medication is another treatment option that is often used in conjunction with therapy.

If you or someone you know is suffering from social anxiety disorder, “your primary healthcare provider is your best first line of defense,” Marez said. They will be able to address any concerns you may have and can point you in the right direction to take the next necessary steps.