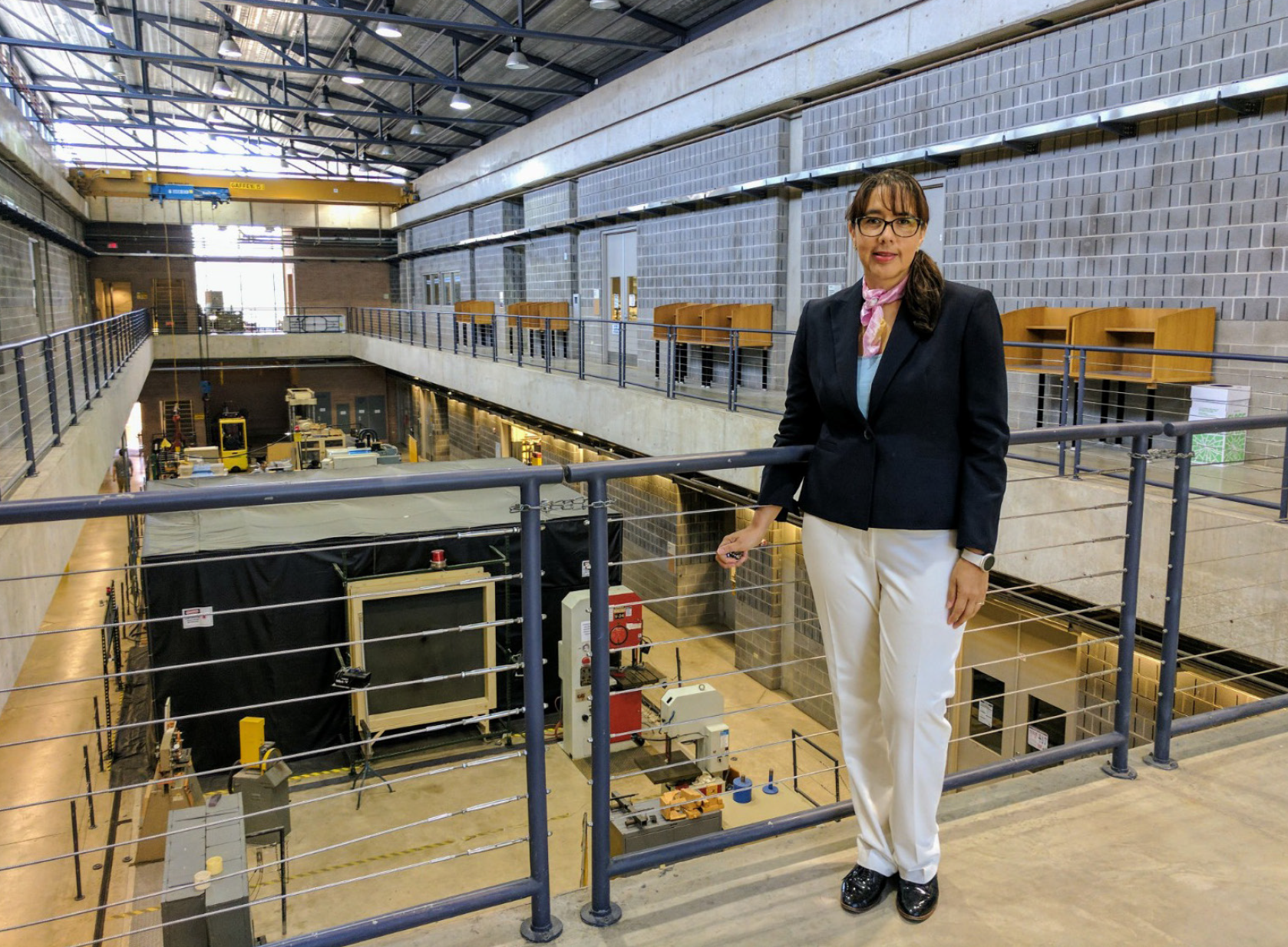 On a Friday night in the summer of 2015, Dr. Karen Lozano received a phone call from an unknown number. Not one to answer an unknown call, she surprised herself when she hit the green button. The person on the other end stated that they were from the White House, and that President Barack Obama was requesting her presence in Washington, D.C., that coming Monday. Skeptical about the call, she asked that they communicate with her via email. Two minutes later, she received an email from whitehouse.gov.

That following Monday, she sat at a roundtable meeting with Obama and eight other entrepreneurs from a variety of industries. “It was very interesting,” she said. She reflected on the experience, remembering herself as a little girl in Mexico who always admired science and engineering. Now, there she sat, at a table full of nationally recognized business people who were helping change the landscape of business. “You’re talking about dreams come true.”

Road to the Valley
Lozano began her academic career at La Universidad de Monterrey, where she double majored in mechanical engineering and business administration. She was offered a fellowship to Rice University, where she pursued her master’s and doctorate in the Department of Mechanical Engineering and Materials Science.

On the day of her doctoral graduation, Lozano dressed up her then-2-year-old son in a cap and gown, and was hooded holding his hand. When she found an article highlighting the event, and her special sidekick, she learned that there was something more unique to her graduation. She discovered that she was the fifth woman in 87 years to graduate from Rice with a mechanical engineering degree. At Rice, she was also the first Mexican woman to ever receive a doctorate from the university’s College of Science & Engineering. 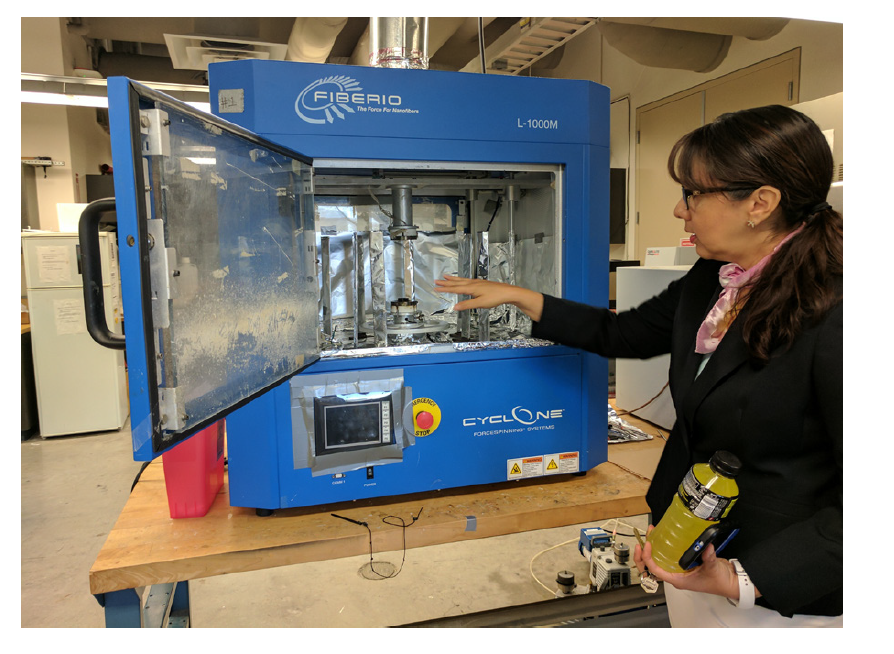 “I was like an alien working on Earth,” she said, looking back on the achievement. “It was a good thing I didn’t realize any of that until I graduated.” She had focused on her studies and research without the pressure of statistics. She stayed on at Rice for her postdoctoral work, but a trip for a wedding in Monterrey changed the course of her life.

Growing up in Monterrey, Lozano and her family would cross the border to shop in McAllen. She was familiar with La Plaza Mall and South Padre Island, but hadn’t been north of Nolana Avenue. On their way from Houston, her family chose the longer route through McAllen for no explainable reason. On the highway, she saw a sign for the University of Texas-Pan American, and said, “let’s go and see what’s there.”

They found a hidden treasure in Edinburg. They were amazed by how big the university was and that it even existed. It was the middle of the summer of 1999, and the campus was quiet, as there were only a few summer classes being held.

When they spotted the engineering building, they strolled inside out of curiosity. A few minutes later, they bumped into the director of the School of Engineering at the time, Dr. Edwin LeMaster. He asked what they were doing there, and if he could provide any assistance.

“Oh I’m sorry, we don’t want to intrude or anything,” Lozano recalled saying. She introduced herself, saying, “I just finished my PhD at Rice University, and we were on our way to a wedding …” The director jumped in and asked, “Oh, do you want to see the labs? You know that this is a new building. I can show you around.” She says he was the greatest guy on Earth, and agreed.

LeMaster took them on a tour of the labs and Lozano was amazed by the new discovery. Many of the instruments she was using at Rice were there, and they had plenty of space and “cool stuff.” He told her that they had been hiring, but that the positions were filled, and to send him her resume, as he’d like to stay in touch. She responded by letting him know that she wasn’t looking for a job right then, but agreed to send him her resume when she got back.

In early September, the department secretary at Rice said that someone from UTPA (now UTRGV) was looking for her, and her adviser relayed the same message. When she called back, she was told that a professor that had been hired couldn’t make it, and would she be able to start working that following Monday? She said that she hadn’t actually interviewed for a position, let alone applied for one. They said not to worry, and two days later she was on UTPA’s campus, interviewing for the position. She was offered the position right away, but negotiated to start that following January.

In the spring semester of 2000, Lozano started her professorship at UTPA. She was given a full teaching load, and immediately set to work writing and submitting a proposal. She was granted the proposal, a CAREER grant (which is the most prestigious proposal that any young scientist can get), and the first ever at the university to earn one. UTPA received $400,000 from the National Science Foundation for her to do research, which she quickly used to get instruments and to set up a proper research lab.

Now, more than 15 years later, she has 75 students doing research, and faculty that work and help maintain the labs.

Innovation & Entrepreneurship
In her early days at UTPA, Lozano found herself once again in a unique situation. She was the only woman and youngest faculty member in her department.

“I always felt kind of intimidated,” she said, even at Rice, thinking that “everyone is so smart.” She laughs now, and says that her husband would say “you’re smart” and “I would say everyone is really smart.” As time progressed, she realized that you become smart in the area that you specialize in, but that the real value is when you understand this later, as it keeps you working harder.

Lozano believes in hard work, and encourages those she educates and mentors to learn through their determination. She is part of the effort to bring more talent into STEM (science, technology, engineering, and mathematics), and to show the Valley youth that mechanical engineering is an exciting field.

Over the years, Lozano has reached thousands of students through various outreach programs and events. She likes to break the stereotype that mechanical engineering is a male-oriented field, focused on fixing airplanes and cars. She explores with students all of the exciting aspects of the field, and the truly unlimited possibilities for innovation. As she looks at her own student dynamic, where approximately 13 percent are female, she is happy to have the opportunity to dispel stereotypes, and encourage more girls to pursue mechanical engineering.

In September of 2016, at the urging of her son, Lozano started her own YouTube channel, “Karen’s Lab.” Initially unfamiliar with YouTube, she watched videos in order to educate herself, and ultimately decided that “yes, I can do that.” “Karen’s Lab” is an opportunity for her to easily reach audiences, and to have a wider impact. Her videos involve fun experiments, that are both educational and entertaining to watch. She wants students to be motivated to do science and engineering.

With her regular channel posts, Lozano looks forward to the local and national impact that she can have. When asked about what is needed for the Valley to continue to grow and thrive, she says “innovation and entrepreneurship.” She believes that it is important to think differently, in a way that enables you to improve upon something. She is an entrepreneur herself, having cofounded the company Fiberio Technologies, which utilizes centrifugal force technology to produce hundreds of meters of nonwoven nanofiber mats per minute. The company was sold last year and moved to Tennessee, taking with it some of the students that had been there from the start.

From her own experience, Lozano knows that anything is possible in the Valley. She’s worked with many talented students and colleagues, and knows that embracing innovation will mean success and growth for the university and the community as a whole. She wants to continue to “promote the innovator of the 21st century, so that we have a lot of them here [in the Valley].”