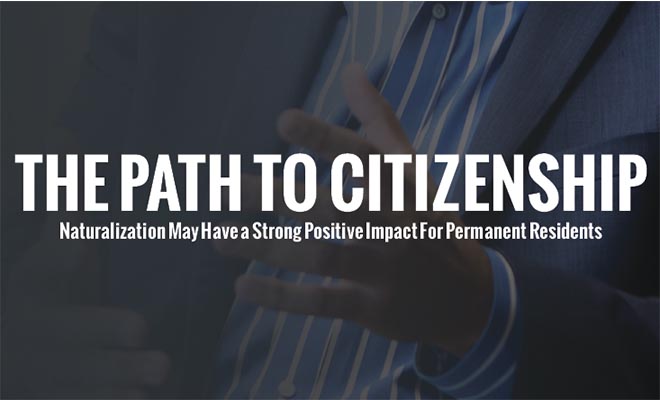 Over the last year, I have seen an increase in permanent residents interested in obtaining their American citizenship. At the same time, the public discourse on the American immigration crisis is at an all time high. Although we have seen large amounts of proponents on both sides of the issue, there is no question that a change in our system is urgent. With over 10 million individuals out of status and an overwhelming amount of immigration petitions pending, we are sure to see some of these changes happen pretty soon.

In the meantime, many U.S. legal permanent residents are asking themselves where they stand as it relates to having some type of guarantee to stay here long-term, and legally bring the rest of their family to the U.S.

The answer to these questions is simple; you need to naturalize.

By becoming a U.S. citizen, a permanent resident can accomplish many solutions that may have a strong positive impact in both their own lives and that of their families.

A large number of legal permanent residents are unaware that making a single mistake–by committing a certain crime or other immigration violation, no matter how long he or she has lived in the United States–he or she could be placed in deportation proceedings before an immigration judge. This can have devastating effects on the immigrant and his or her family members. Naturalized U.S. citizens generally have nothing to worry about unless fraud was committed in the process of obtaining the naturalization.

In addition, by becoming a U.S. citizen, a legal permanent resident can travel or live abroad as for as long as they want. Permanent residents cannot live or travel outside the United States for more than six months at a time. If they do so, they can be found to have abandoned their residence, and therefore lose their green cards. Also, permanent residents who return to the United States every six months but only stay for a short period of time — for example, 2-4 weeks at a time–can also be found to have abandoned residence. U.S. citizens, on the other hand, can live outside the United States for as long as they want and still call America “home.”

Many permanent residents also see themselves frustrated because of the waiting times to bring over their immediate relatives. They may wish to bring their parents or siblings to the U.S. but are unable to do so under their current immigration status. One of the goals of U.S. immigration law is family unity. Nonetheless, while permanent residents can petition for spouses and unmarried children, U.S. citizens can avoid the long wait times for their immediate relatives and petition for their parents, married children, and siblings.

These benefits are among several other perks that permanent residents can enjoy once he or she has naturalized, such as the ability to receive estate and gift tax advantages, which is only available to U.S. citizens. Similarly, they obtain the right to vote, and the right to hold public office.

The general rule for a permanent resident to be eligible for naturalization is that you need to proof five years of legal permanent residency in the U.S., good moral character (i.e. no serious criminal convictions in the recent past) and proof of good standing with the IRS. If the permanent resident is eligible to apply, the applicant will need to communicate with the immigration officer in English at the time of the interview and take a brief U.S. history test as well as provide a reading/writing sample.

With the current political environment and international security concerns, these requirements are likely to become more difficult to meet. As an experienced immigration attorney, I would highly recommend for all permanent residents to educate themselves on the benefits of naturalization and their eligibility before the current laws are changed.