Lacking the resources to pay for school out of his own pocket as well as permanent residence status, Carlos Avila says his options are limited when it comes to finding a future university.

Born in Pachuca near Mexico City, Avila said he and his family moved around the country following his father, who was always seeking work. Settling in Monterrey and then Reynosa, Avila said the family entered the United States when he was 10 years old.

“Instead of me entering sixth grade, they wanted to put me in fifth grade,” Avila said. “After talking to counselors and teachers, we all agreed that I could stay in sixth grade as long as I didn’t fail a class.

“Well, since then I have never failed a class. Here I am ready to graduate college before I finish high school.”

Now 16, Avila is currently a student at PSJA Southwest. He plans to graduate with his associate degree in computer networking by the time he finishes high school. His residency status, however, limits the amount of assistance he can receive for college, and he thinks his best shot is striving for a soccer scholarship in order to attend college.

Avila is part of a specialized group composed of veterans, spouses, and returning students who have opted to pursue a new hands-on digital forensics associate of applied science degree at South Texas College. The small group of students call themselves “the original 12” on account of them being among the first to enter the program formerly known as digital forensics specialist when it changed in 2016.

Another student, Jose Padilla, fell into the cybersecurity field as a student at South Texas College. He is already employed as a network specialist by Netsync, a company specializing in communications, data center and cloud, network infrastructure, wireless and mobility as well as physical and cyber security in McAllen.

Padilla said he has had an affinity for everything computer-related since he was little, and built his own computer when he was 14.

“The program isn’t too far from what I was into already, which is the networking program. I decided to go for both, and they go hand in hand,” Padilla said. “Having that cyber security knowledge and background is going to help out no matter what path I want to take in networking.”

Classes are akin to working with family, according to Noe Zamora, an older student who graduated high school in 1985, and spent years working as an AC technician before being injured on the job in 2004.

“We all help each other in this group. We’re like a family,” Zamora said. “Most of us who are studying networking and cybersecurity are really close. We try to stick together. We also hopefully have a cybersecurity club in the works right now.” 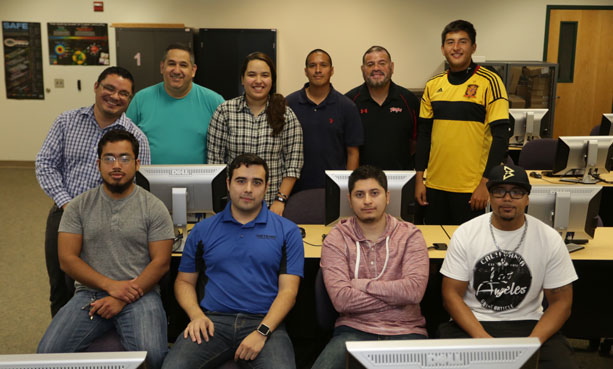 The National Security Agency and the Department of Homeland Security have designated South Texas College as a National Center of Academic Excellence in Cyber Security Two-Year Education (CAE2Y) institution through 2022.

The designation, according to NSA and DHS, emphasizes STC’s role to address the critical shortage of professionals with these skills, and highlights the importance of higher education as a solution to defending America’s cyberspace.

The program has the potential to be vital to current employers, according to experts in the industry.

“In our business, we manage over 900 governments out of our McAllen cloud system. This means people are actually transacting payments electronically through our highly secure systems,” said Mike Braun, special projects director with Hamer Enterprises, a company that has specialized in government solutions for more than three decades.

“We have to constantly monitor the outside world,” Braun said. “It’s not just tracking individuals or trends, it requires investigative skills as it relates to identifying where the sources are coming from. Students have to have the ability to track through, and find where the intrusion is coming from.”

South Texas College has emerged as only one of four colleges in Texas to receive the prestigious designation by NSA. This designation will allow the institution to work together with federal organizations and other colleges and universities to better prepare current and future students in cyber defense.

“Students who go through our program will earn the skills necessary to help defend America’s cyberspace,” said Francisco Salinas, assistant chair of the Information Technology Program at South Texas College. “In addition, our students will have the opportunity to apply for scholarships, should they decide to continue their education and obtain a higher degree.”