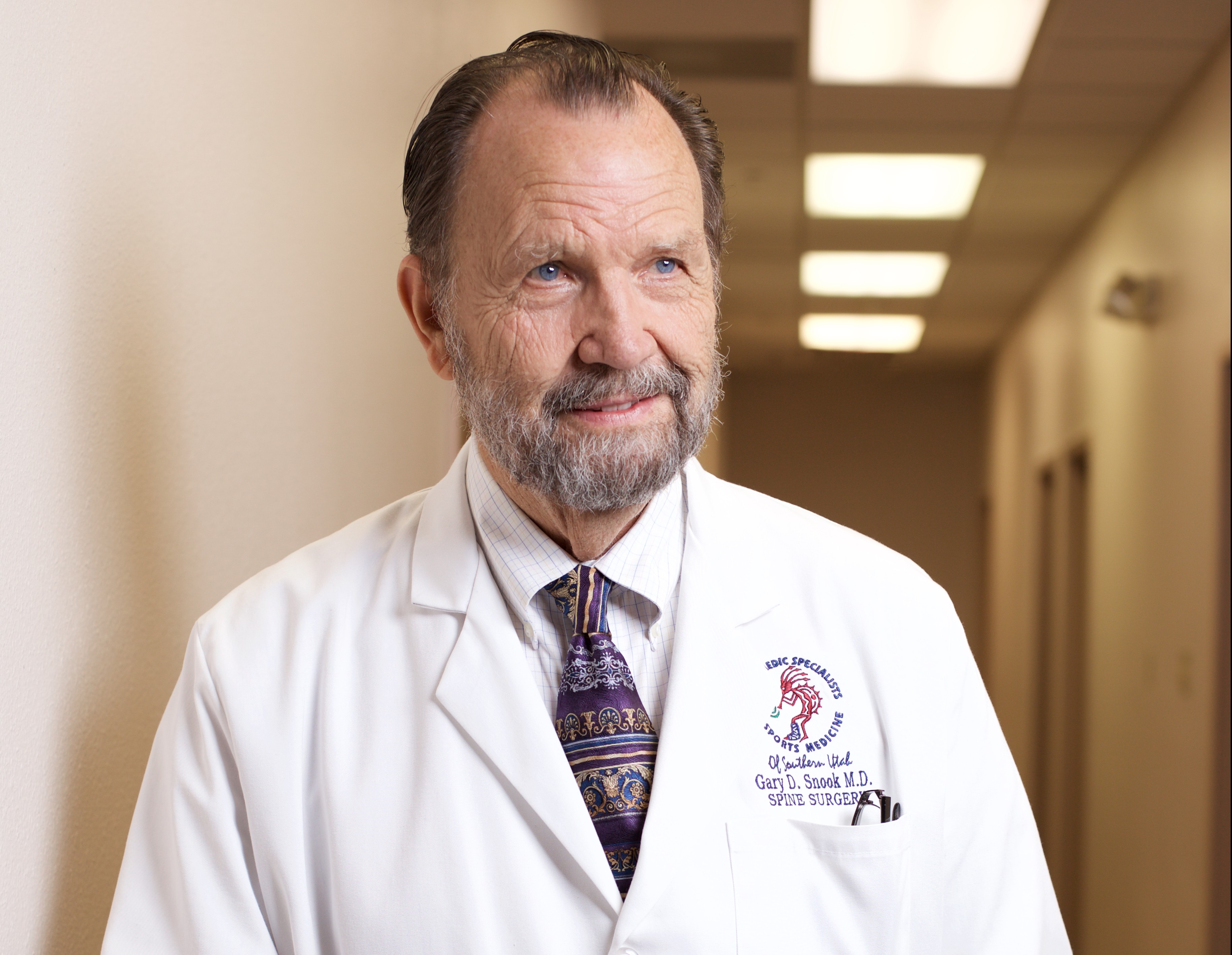 Dr. Snook’s friends joke that he’s the real-life version of the Dos Equis commercials’ “Most Interesting Man in the World.” Really, they’re not far off – the man’s life story is a veritable tall tale. Chapters include growing up without electricity in rural Colorado, traversing the Rocky Mountains on bike, nailing his med school interview by filling in the interview committee on some breaking biotechnology, lecturing to audiences in Los Angeles and Manhattan… you get the picture.

Dr. Snook looks the part too. He’s got twinkling blue eyes and a leathery voice that’s more intrepid explorer than scrubbed-in surgeon. To top it all off, he’s one of the Rio Grande Valley’s leading orthopedic specialists. He gets patients back on their feet (and back to their lives) quickly and safely. So, if not the most interesting man in the world, Dr. Snook is certainly up there.

Long before he was a surgeon in the Rio Grande Valley, Gary Snook was a miner’s son in Colorado’s wild Western Slope. Calling the Snooks’ lifestyle “rustic” is putting it mildly – think Colorado winters without indoor plumbing and only a wood-burning stove for heat. At age fifteen, looking to trade in the country life for stability (and running water), Dr. Snook headed for Green River, UT and enrolled in the local high school.

Senior year, unsure of his future, the young Dr. Snook got an extraordinary offer from a friend’s father: “If you drive my son to and from college, I’ll pay for you to attend, too.” College wasn’t on Dr. Snook’s radar – the idea of an income was more appealing – but he accepted. Before long, the ambivalence turned to dedication as Dr. Snook realized that the world’s decision-makers were college educated. He knew he wanted that option for himself.

Dr. Snook’s entry to medicine was somewhat unconventional. He started out in chemical engineering but soon switched to medicine because “when it came to talking to pretty girls at parties, ‘chemical engineering’ wasn’t quite getting the response I wanted.” To be fair, he also enjoyed the courses. After college, Dr. Snook headed to medical school at the University of Utah College of Medicine. He jumped head-first into his medical education, completing an exchange term at Harvard, a rotation in trauma at Chicago’s famous Cook County Hospital, and a thoracic surgery training period in Dallas. All that, and Dr. Snook graduated six months early – with hardly any debt.

Dr. Snook’s next move landed him at the University of Texas Medical Branch in Galveston. He had many options for this career phase, but he chose UTMB, partly because it’s a strong program and partly because of the Glen Campbell song “Galveston.” However, after several robberies and one outdoor tennis match in July, Dr. Snook began to wonder whether Mr. Campbell had painted an inaccurate picture….

Soon enough though, he and his wife were off to Scott & White Memorial Hospital in Temple, TX for his residency in orthopedic surgery. Dr. Snook remembers these years with great fondness – the teaching was spectacular and the community was welcoming. After that, the. Snooks moved down to Corpus Christi for a welcome break from the roving lifestyle of a physician-in-training. The Corpus years, like his time in Temple, were a rich experience for Dr. Snook. “Back then, medicine was led by doctors. There wasn’t so much bureaucracy, which made it easier to do what you needed to do for your patients,” he recalls.

After over two decades in the beach town, Dr. Snook felt ready for a change. The Big Change, in fact: retirement. So the 55-year-old Dr. Snook moved with his wife to the Colorado resort town of Steamboat Springs. There, the new retiree really relaxed with activities like building a farmhouse from the ground up and joining a new orthopedic surgery practice (at this point in the interview, Mrs. Snook pipes in: “He’s a failure at retirement!”). Her husband does not disagree.

A year-long battle with cancer is what finally convinced Dr. Snook to slow down. Well, sort of – he did bike 950 miles from Denver to Las Vegas along a Rocky Mountain trail (in 9 days). But he also took an offer from Dr. Raul Marquez that allowed him to perform his specialty, minimally invasive surgery, at a pace that suits him.

These days, Dr. Snook can be found at the Marquez Robotic Orthopedic Institute, where he operates two days per week. He spends the rest of his time making sure his patients are informed, involved, and – most importantly – active. “I tell patients to plan on walking a mile every day for the rest of their lives,” he explains. “The pain leaves faster, the function returns sooner, and your overall health will increase.”

When he’s not operating, our local Most Interesting Man in the World is enjoying his return to the Rio Grande Valley. At age 72, he’s more active than many people half his age. He’s never far from a fishing rod, a sailboat, or a bike path; he even still builds his own furniture. For any other person, such a lifestyle at such an age might raise some eyebrows. But for Dr. Gary Snook, it’s exactly what you’d expect.