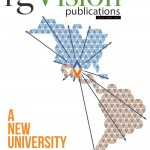 As a 12 year old, Julio Ramos was suddenly thrust into a very adult world that would alter his future forever. Given the responsibility of caring for his mother, who was stricken with breast cancer and who required constant medical attention, Ramos said his stance as the middle child of the family often meant staying at home while his father and brother worked. At that time, his sister was still too young to contribute, so the task to take care of his mother fell on him.
As his mother’s caretaker at home, Ramos was simultaneously able to make straight A’s in school. And there was one experience that would influence his decision to pursue a medical career.
“There was one instance I remember clearly. She needed to clean her wound, and she asked me to help her. She was my mother, so of course I had to help her,” said Ramos, who is now 19. “I remember her lying in bed, and she asked me to clean her wound, and I remember seeing the big scar on her chest. That was the experience that resonated most with me. That is what got me thinking about the process people go through to become doctors.”
“That introduced me to the medical field,” Ramos said. At 12, he said he wasn’t confused about his future. He knew that he wanted to be a doctor, even at a time when many kids were still trying to figure out what they want to do, he said. “By that time, I already had a feeling that I wanted to go into the medical field.”
From there, Ramos said he took the steps necessary to begin his education toward a future medical degree. He learned about Brownsville ISD’s groundbreaking “school within a school” Magnet Program. Homer Hanna High School, which is the home of BISD’s Tech Med Magnet Program for Medical and Health Professions, set him up for success in college.
Currently, as a sophomore at UTB, Ramos has an assured place at the University of Texas-Health Science Center in Houston when he graduates. He said he eventually wants to study reconstructive surgery in order to treat victims of burns and accidents.
“My family is very low income. Nine of us live in one house. Only three people work: my sister-in-law, my brother, and my dad. That is the only income that takes care of the whole house, so that is why I decided to come here (UTB),” Ramos said. “If all goes well with my MCAT (exam), which I take in April, along with the regular 15 hours I am taking as an undergrad, I will be granted acceptance to medical school, and I would start by August 2014.”
Ramos’s story is common among Valley students who have similar talents, but who are searching for a vehicle to help them reach their goals.

“I feel there is a stigma in the Valley that tends to say that education isn’t as important,” Ramos said. “I feel students here, when they realize that medical school is a possibility, will feel better when they realize they don’t have to travel far. Hispanics are very family-oriented, so I think it’s the perfect opportunity for Valley kids who want to go to medical school.”
They may get their chance. 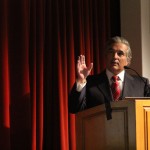 Photo by Adrian Castillo
A New University and a New Future
University of Texas System regents have unanimously approved an initiative to authorize its Chancellor, Francisco G. Cigarroa, to work with the Texas Legislature to establish a new university that combines the University of Texas at Brownsville with the University of Texas-Pan American and create a future South Texas School of Medicine.
The plan would result in a single institution that spans the entire Rio Grande Valley, with a presence in each of the major metropolitan areas of Brownsville, Edinburg, Harlingen, and McAllen.
As the crown jewel embedded within that approval, the decision was made to allocate $100 million over the next 10 years to accelerate the pace of transitioning the Regional Academic Health Center in Harlingen into a future school of medicine.
Now everyone from school leaders, experts in business, lawmakers, doctors, students, and faculty say the implications are endless for establishing a future medical school in South Texas attended by local students who are driven by culture and motivated, above all else, by family.
Most students have had a direct experience with some of the most prevalent conditions facing communities in the region. What is at stake is the future of medicine in the Rio Grande Valley, according to faculty and medical professionals.
“The medical school in the Valley is going to be a source of primary care doctors for the Valley, which is desperately needed,” said Dr. Lorenzo Pelly. A well-known and respected physician in Brownsville for more than 30 years, Dr. Pelly was Valley Baptist Medical Center-Brownsville’s Physician of the Year in 2012.
As a former assistant professor of medicine at UT Health Science Center-San Antonio Regional Academic Health Center, Pelly says a trend at the RAHC included students who arrived to do their training, but then left for sub-specialty training. However, many have come back to the area where they studied, Pelly said.
“It is well known that when you have a medical school, many of the graduates stay in the area of the medical school,” Pelly said. “That is going to be of enormous importance for the Rio Grande Valley. It’s also well known that a medical school is a magnet for businesses. The economic gains from having a medical school are also very substantial.”

“As a legislative delegation, we are optimistic about and really looked forward to today’s hearing. We showed that we have put aside parochial interests to do what is best for everyone in the Rio Grande Valley,” said Oliveira. “The bipartisan support we have received from Chairman Branch and Governor Perry has been extremely helpful. Legislators are realizing that this bill isn’t about the future of the Valley, but rather the future of the state.”

Oliveira said Representative Armando Martínez’s seat on the House Higher Education Committee is a great asset for the interests of deep South Texas.

Oliveira emphasized the importance of HB 1000 to the entire state.

“The Valley is one of the fastest growing areas of the state, and a key population center for the fastest growing demographic, Hispanics, in the state. This bill will provide a much greater opportunity for the people who will be the future workforce of Texas,” Oliveira said. “More and more lawmakers realize that when we improve the Valley, we improve the entire state. The economic and social future of Texas will largely be determined by what happens in the Valley over the next decade or so. If Texas is to prosper, then the Valley must prosper.”

According to the bill analysis of HB 1000, other aspects of the legislation include:

• The bill allows the new university to participate in the Permanent University Fund if the act receives a vote of two-thirds of the membership of each house of the Legislature. Currently, UTB and UTPA are eligible for the Higher Education Fund.

• The bill provides for the abolition of UTB and UTPA at a date to be determined by the UT System Board of Regents. The bill requires the Board to set up an advisory group to assist in the designing, organizing, and implementing a medical school to serve the Rio Grande Valley. Recommendations to the Board would include the best locations for the medical school administration and operations.

• It is assumed that in the first year the medical school is operational, it would enroll 50 medical students. Using a formula base value of $8.874 and a weight of 4.753, it is estimated that the All Funds formula cost for these students would be $2.1 million. It is assumed that the formula statutory tuition income for those students would be $175,048, and that the General Revenue formula cost would be approximately $1.9 million.

It is assumed that 50 students would enter the school each year until enrollment reached 200. The formula costs associated with 200 students would be $7.7 million in General Revenue, and the anticipated statutory tuition would be $700,193.

• It is assumed that any remaining costs, including faculty and construction costs associated with the new medical school, would be covered by existing institutional resources or constitutional funds allocated for that purpose. It is also assumed that participation in the Permanent University Fund instead of the Higher Education Fund would not result in any additional costs or savings to the two funds. Any costs associated with the advisory group would be absorbed within current resources.

‘My Babies Will Go to this Medical School’
Gathering feedback from students and the community, leaders of institutions say the proposed university and medical school will transform the Valley forever.
“I have already heard from mothers, and one told me that she has a two year old and a four month old. She said that after hearing this announcement, she felt both of them will go to that medical school,” said UTB President, Dr. Juliet Garcia. “It just changes the whole expectation of what’s possible for her own children.”
“It’s going to literally transform the Valley in many significant ways. The first way is that it will create a template for all of us to work together and thing regionally,” Garcia said. “People from all over the world already think we are one place. We are the only ones who sometimes forget that. The synergy that is going to come from this is going to be very powerful. Immediately, all the degrees that are available at UTPA will be available at UTB, and vice versa, so without spending more money, you have taken the same resources and exploded their impact.”