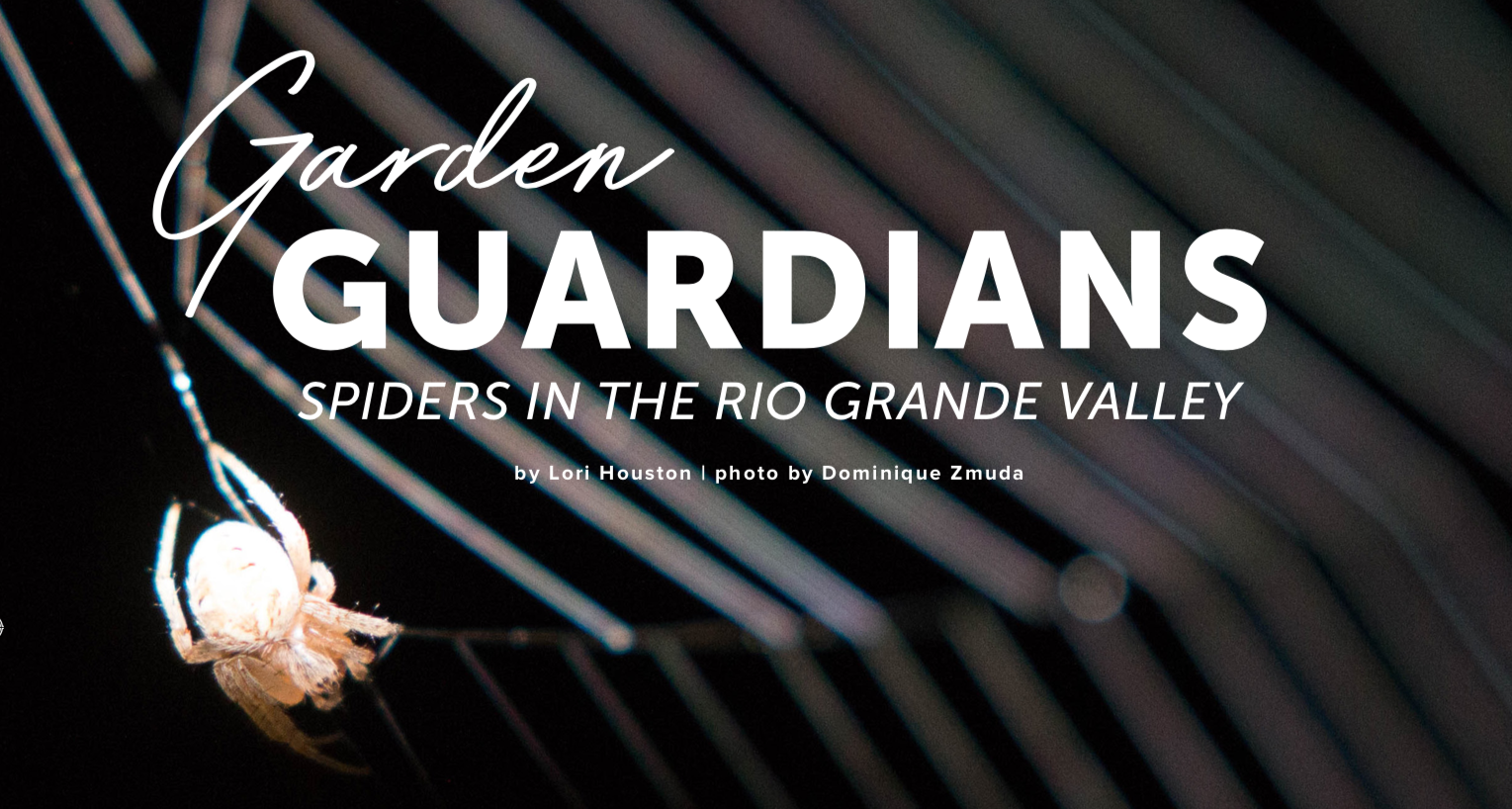 Anybody who has been the first person down a path in the morning and managed to get a spider web in their face likely considers spiders a nuisance. There are also plenty of people who just think they’re creepy. But according to John Brush, Urban Ecologist at Quinta Mazatlan, “They’re actually very helpful predators.”

There are roughly 43,000 species of spiders known in the world, and Brush estimates that there’s probably many more thousands that have not been documented yet. Texas A&M University’s Department of Entomology says that there are likely over a thousand species within Texas, and most of those can be found in South Texas.

Venomous spiders like the black widow and the brown recluse are usually some of the first that come to mind when people think about spiders. Although their venom can be deadly to humans, Brush says encountering one of those is pretty rare because they normally hide under things and are not aggressive. “Being bitten by a spider is actually very unusual, and normally requires you to be picking up the spider and really kind of harassing it,” he said.

Spiders can sometimes be divided into two categories, based on their hunting styles: spiders who trap their prey in webs, and spiders who hunt for their prey.

The silver garden spider is seen a lot in the Rio Grande Valley, especially at Quinta Mazatlan, Brush says. They are a member of the orb weaver species and can get to be fairly large. Including their legs, they can be about the size of a quarter. All spiders have eight legs, but this spider frequently holds its legs in pairs, forming an X. They tend to build their webs in cacti, agave, or other spiny plants.

The spiny backed orb weaver is much smaller than the silver garden spider, roughly half the size of a dime. The abdomen is hexagonal in shape and they have little spines that stick out of the sides of the abdomen. They come in a variety of colors, but in this area, the most common color combinations to be observed are red and white, mostly red, yellow-orange, and white. “They’re completely harmless,” Brush said. “They’re unable to bite you for the most part.”

The tropical orb weaver has a very large abdomen, and it can have a variety of markings on the back. In most cases, it’s some kind of whitish or greenish spots or streaks going down the abdomen. According to Brush, these spiders will build their web each night, and then during the day, they end up having their webs taken down and have to rebuild them again in the evening.

The orchard orb weaver is usually a mix of green, orange, and white and has a long, egg-shaped abdomen. “A lot of the times, I see them upside down, meaning that they build a web and they hang out on the underside of the web,” Brush said. “But they’re relatively small, and again, they’re perfectly harmless to humans.”

The most common species of tarantula in the Rio Grande Valley is the Texas tan tarantula. They can often be seen after a rain, especially out in the ranch countries. They are mostly encountered at night, late evening or early in the morning. Sometimes, during the day, you can see them just outside their burrows, which are holes dug in the ground at an angle, just big enough for the spider to fit into. Some tarantulas can get to be the size of your palm.

A common hunting spider that you can see around your house is the bold jumping spider. This one is black and white, and its most interesting feature is its mandible, or jaw. Bold jumping spiders are bright green and really stick out. They are active hunting spiders, using their jumping ability to pounce on their prey like a cat. The female of the species is about the size of a penny.

The Green lynx spider is a hunter, as well, because it doesn’t build a web. These spiders hunt in flowering plants, eating the insects that are attracted to the plant. The green lynx spider is totally green and has very hairy legs. They can get quite large.

Crab spiders also hang out on flowers, but since they come in a lot of different colors, they really blend in with the plants. Their hunting style is more like “sit and wait” directly on a flower. Then they use their long front legs to reach out and grab their prey when it comes by.

The wolf spider is large and brown and is an active hunter as well. They are often found in urban areas in people’s yards and homes. “In some of the species of wolf spiders, the female will carry her baby spiderlings on her back for a while,” Brush said. “And so you can actually see hundreds of little baby spiders on the back of the mother spider as she runs around.”

It’s important to have a healthy spider community in your area to help serve as pest control and keep insect populations in check. This is especially important for agriculture, as spiders help control the insects that damage crops. Spiders are one of the most important predators that we have in terms of getting rid of other pests.

“According to a recent study, about 400 to 800 million tons of prey are killed every year by the global spider community,” Brush said.