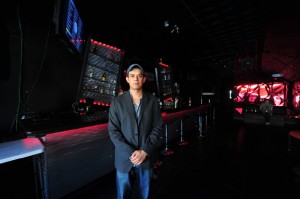 OMG – culturally identified as the SMS language term for surprise and excitement. It’s an expression that, when closely examined, has come to represent the essence of 21st century youth, where smart phones and digital media reign supreme. It’s also the perfect moniker for McAllen’s newest shot bar, OMG A Shot Bar, a business that embraces the concept of customer service through social media. Located in the heart of downtown 17th street across from Bar 201, and taking advantage of its ideal location, OMG has thrived since its inception in January of 2011.

Co-owners Ismael Morales, Danny Morales, and Marco Perez are enjoying a triumphant year and a half in business. The two cousins, Ismael and Danny, with their friend turned business partner Marco, started this venture from the bottom up.  Ismael, a young entrepreneur, got his start as a bartender.  What began as a part-time college job, developed into a full-time career ambition. Between the Morales’s there is approximately two decades of experience, combined with Marco’s experience running another business downtown. With some encouragement from Danny, Ismael made the decision to open up a bar downtown. When deciding on the type of establishment they wanted to create, the concept of operating a shot bar seemed the most logical. Known for its relatively low overhead, a shot bar fit perfectly with their key demographic.

By sheer luck a space became available on the northern end of 17th street, where work quickly began to transform the approximately 900 square foot space into the dark contemporary lounge that is OMG. Recognizing the importance of creating distinction, Perez commissioned the installation of an interactive LED paneled wall and countertop that light up in response to human contact.  While seating may be sparse, Morales explains this is intentional describing it as “a quick drink stop”.  With the average customer making a less than fifteen minute visit, OMG relies on a relatively constant flow of traffic.  On busy weekend nights thousands will make their way in and out of the bar where OMG relies on an energetic young staff. Currently, Morales manages a staff of seven employees, the majority of which have been at OMG since opening day, in addition to their resident DJ.

One of the key components to OMG’s success has been their ability to masterfully manipulate social networking.  Understanding that Twitter and Facebook can do wonders for small business, Morales ensures that these sites are actively maintained. Having a virtual connection to consumers ensures consistent feedback and even brand loyalty.  The success of OMG has paved the way for their newest venture, Nox Diem, a much larger venue located just right next door.  With a winning formula for success, the possibility of opening more establishments in various cities both in the RGV and to the north is probable if not inevitable.