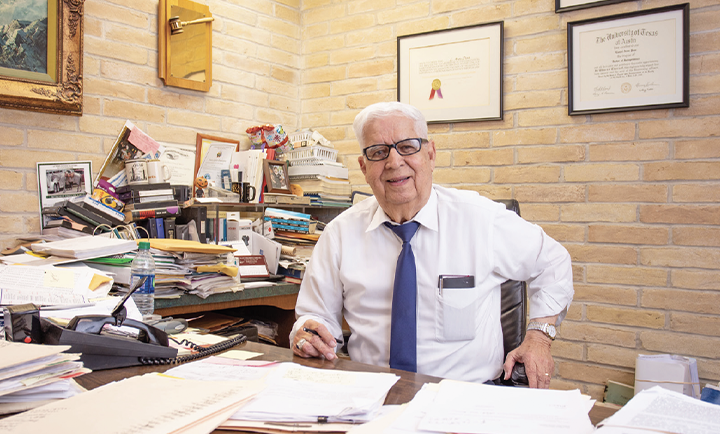 Lionel Aron Peña Sr. knows exactly where he was the night of the Pharr Riots in 1971.

“I remember so vividly because I had a Boy Scout troop of about 80,” he said. “Boy Scouts were camping here, at night barbecuing and camping. We hear the fire trucks and police.”

At that moment, Peña didn’t know just how involved he would become in the event. As a lawyer, he would represent a group of youths arrested during the demonstration, which included hundreds of mostly Hispanic protesters marching on the Pharr Police Department. The demonstration grew heated, and the nearby fire department sprayed protesters with hoses. Protesters began throwing rocks. When police fired their guns over the protesters’ heads in an effort to disperse them, a bystander was killed.

Peña was also later hired to represent the police officer who pulled the trigger.

“They were not listening to the people,” he said, remembering the event and the period of history it belonged to. “The Pharr riot was only a symptom of the times.”

Born in a segregated Elsa on Oct. 16, 1935, Peña grew up and bore witness to many important moments of Rio Grande Valley history. He grew up in poverty, one of six children to parents who worked in agriculture. As children, he and his siblings would help out with the farm work.

“But as soon as we could get a newspaper route, we’d have a newspaper route,” he said. He recalled shining shoes as a 4- or 5-year-old for farmworkers, catching them at payday, when they were feeling extra generous. Additional income came from Peña’s eldest sister, who worked at a pharmacy, and his eldest brother, who was drafted. Peña and another brother joined the reserves, which brought in more money. Plus, he worked about every position there was at the Piggly Wiggly.

“We didn’t know we were poor,” he said, laughing as his wife, Sylvia Alamia Peña, reminded him of a childhood of selling bottles and going to school barefoot. “We had a TV set. We’d go to the movies on weekends.”

Just as it wasn’t immediately apparent to him that he and his family were living in poverty, segregation was simply something Peña and his peers lived with.

“In school, we had no problem mixing,” he said. “Dating was limited. I could date an Anglo girl, but I couldn’t do it very publicly. We were segregated, but we didn’t feel it.”

“It was good because it kept us out of trouble,” he said.

Peña continues to emphasize the importance of education today.

“It brings you up to a level of understanding and being able to speak,” he said. “You never stop learning. And now, education can be self-education — you don’t have to go to class for that anymore.”

It’s that dedication to education that caused Peña to later be on the board of the South Texas Higher Education Authority — a position he’s held for 45 years, since the nonprofit organization’s inception in 1975. The organization has provided educational opportunities for more than 450,000 students throughout Texas and helped raise over $1 billion, says Patricia Beard, its president and CEO.

Once he graduated college himself, Peña decided to attend law school at the University of Texas in Austin.

“I could see, growing up, some of the needs for everybody to have equal protection,” he said, remembering a drunken driver who caused a fatal wreck getting off with minor charges.

Living in Austin and going to law school, Peña’s strong work ethic continued to drive him forward. He worked in a grocery store, as a committee clerk in the Texas Legislature, driving a taxi, and selling insurance.

“When I married my wife, the moment we were in church, I remember that so vividly,” he said. “That was it. I had it all in front of me — my wife was there with me. Second year of law school. Good job. And good grades. That moment was the greatest moment of my life.”

He and Sylvia had their first child June 8, 1959 — Lionel Aron Peña Jr., who would go on to serve as the Texas state representative for House District 40. As Peña tells it, though, he almost didn’t get his wife and newborn out of the hospital.

“The sister said, ‘you can’t take your wife and baby home until you pay the rest of the bill,’” Peña said. “And I said, ‘well, Sister, you keep them — I can’t pay the bill.’ It was a joke, but she didn’t laugh. She let us go. I paid off the bill.”

Peña and his family returned to Edinburg as soon as he passed the bar — there was a job waiting for him. He’s been in law ever since — for nearly 60 years — and practices to this day.

“Judges will run me out one of these days,” he joked. Peña continues to travel all over the country for cases. “It’s really a joy to do that.”

One of the biggest changes that Peña has witnessed over the course of his long career?

“The participation of all people in our government,” he said. “In the old days, it was very hard. But I was school and city attorney at the same time with predominantly Anglo boards. It’s because we got along.”

“Al won — that was big because the first time ever, a Hispanic would get elected mayor of a sizable city in the Valley,” Peña said.

Peña Jr. also remembers that as a special time for the people of Edinburg.

“I got to ride in the parade with him as a little kid,” he said. “Edinburg was semi-segregated and when we crossed the railroad tracks, people went nuts. They went nuts for him as they did probably for Al Ramirez because back then, it was a novelty to have Hispanics in public office. That had a big impression on me and probably led to my involvement in government and politics.”

Even now, at 84, Peña shows no signs of slowing down. When he’s not traveling the country for cases, participating in the Lions Club, serving as a deacon at his church, or attending weekly breakfasts with friends that Sylvia dubs “The Liars’ Club,” he’s spending time with his large family, estimating that his grandchildren and great-grandchildren number in the 30s.

“Time with the family is important,” he said. “As busy as we’ve been, we still spend a lot of time together.”