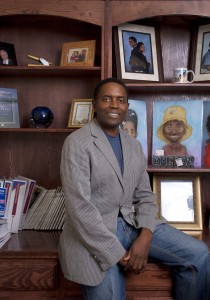 The harsh reality of diabetes in the Rio Grande Valley is that every patient has the disease until proven otherwise. That’s the outlook, according to Dr. Marcel Twahirwa, an endocrinologist and director of Joslin Diabetes Center who, along with staff and partners at Doctors at Hospital at Renaissance, find themselves on the front lines combatting a near pandemic disease that affects Latinos here more than any other part of the country.
Part clinic, part laboratory and part classroom, Boston-based Joslin is a global leader in diabetes research, education and care offering the latest advances for treating diabetes and its complications, as well as patient education and support services.
In the region, experts at the center say they find themselves in ground zero not only for treating a huge part of the population who have the disease, but also for potential breakthroughs in research that may one day lead to its cure, according to Dr. Twahirwa.
“The first thing we are trying to do is recognize that diabetes is a problem. For us here, diabetes is not just a problem, it’s actually our lifestyle. We have to make sure our lifestyle reflects reality regarding diabetes,” Dr. Twahirwa said.
“Everybody who lives in the Valley, chances are they will become diabetic. If you look at children, it becomes an even truer reality, because 50 percent of the children born today will probably become diabetic before they become 20,” he said.
The numbers in the region indicate a very serious problem. Almost 30 percent of the 1.2 million people in South Texas have the disease, which totals to nearly 120,000 overall, according to the National Minority Quality Forum, a research organization dedicated to ensuring that “high-risk racial and ethnic populations and communities receive optimal health care,” for the disease.
The problem of diabetes is compounded by a region that has more than a quarter of its population (25.3 percent) uninsured, according to Joslin. When you factor in undiagnosed cases and pre-diabetic cases in the Valley, that 30 percent starts to become almost 30 to 40 percent of the population with the disease, which can lead to numerous medical complications, including heart attack, stroke, blindness, nerve damage and kidney failure, according to Dr. Twahirwa.
“What we are doing here, in addition to treating diabetes is focusing on the awareness of this being a pandemic disease affecting Latinos here more than any other part of the country,” he said. “It’s challenging, and it’s humbling because the job is just monumental. When you see that it’s not only challenging and humbling, it’s also intimidating.”

Joslin utilizes a network comprised of affiliates in 44 locations including 38 national sites and three skilled nursing facilities in 17 states, plus three international sites. Established at DHR in 2011, Joslin provides clinical, educational, operational and marketing support to its affiliates to help assure that high quality, comprehensive and cost-effective diabetes care is available to each partner’s community—and that these organizations and the patients they serve are in touch with the latest clinical trends and research breakthroughs.
Dedicated not only to the treatment of patients, Joslin also includes dietary classes as well as diabetes teaching and prevention programs. Exercise and eating healthy are greatly emphasized, as is the center’s research component. 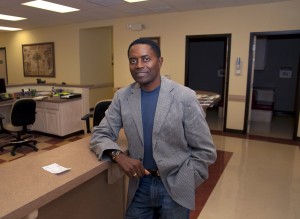 The mission at Joslin, according to Dr. Twahirwa, is to empower the patient with knowledge. The more education patients have, the better they will take care of themselves, he said.
Services at Joslin complement a wide range of options for patients at DHR, including bariatric treatment, which has been proven to prevent or “cure” the disease. A new study published in the New England Journal of Medicine by the Swedish Obese Subjects study group found that the bariatric surgery, as compared with typical care, reduces the long-term incidence of type-2 diabetes by 78 percent in obese patients.
According to the study, “bariatric surgery has a preventive effect on incident type-2 diabetes, particularly in participants with impaired fasting glucose. Disturbances of glucose metabolism might be treated early, even before type-2 diabetes is diagnosed.”
“We know that education is really the key. Even though we are prescribing medications, and we do everything we need to do to combat diabetes, we know that education is the key if we are ever going to really succeed in fighting diabetes,” he said. “Also, recent studies have shown that you can actually prevent or ‘cure’ diabetes, and for sure you can control it, with bariatric treatment. We know that simply losing weight increases your chances of fighting diabetes more efficiently.”