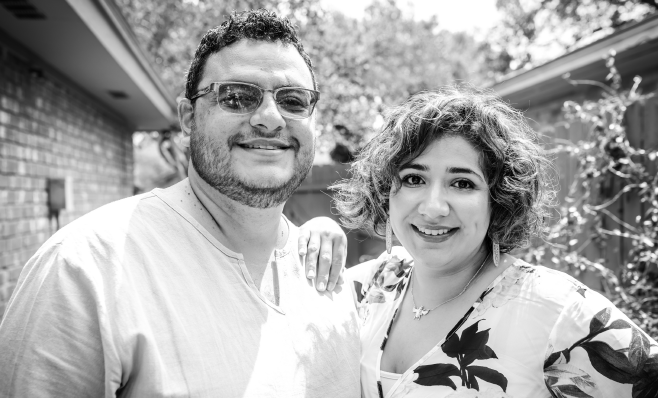 “Our population (in Hidalgo County) was probably sicker than other populations — even among other border areas,” Melendez said. “It’s easy to say that the reason the death rates are so high is that we’re No. 1 in diabetes, hypertension, obesity, hemodialysis utilization in the country. For example, the diabetes rate in the country is 7 to 10%, and in the Valley it’s 30%.”

According to Melendez, Valley residents have baseline health that is sicker due to the lack of primary health care access such as preventive care. Additionally, nearly 40% of people in the Valley are underinsured or uninsured compared to the national rate of 7%, Melendez said.

“Our Valley people were sicker,” he added. “Imagine running a marathon and having people that are trained and people that are not trained. Well, we’re those people who got to get up and run 26.3 miles (without training). That’s why a lot of our people die.”

With careers in the medical field, the pandemic would affect McAllen residents Sofie and Raymond Fuentes differently. In April 2020, a few weeks after Gov. Greg Abbott declared a statewide emergency, the Fuentes decided to borrow from their 401(k) to purchase a small camper and park it in their driveway for Raymond, an emergency room nurse, to use.

Sofie, who works from home for an insurance company, battles with Lupus, an auto-immune disease. She said although she and their three sons were out of danger, with Raymond working in the ER, they knew they would be bearing the brunt of the virus. 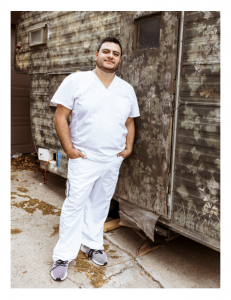 Their concern came true when Raymond and Sofie contracted COVID-19 in summer 2020.

Raymond continued to live in the camper until July 2020, when a tornado watch hit the Valley due to Hurricane Hannah. Like many Valley residents, the Fuentes boarded their windows and prepared water to stay safe when the hurricane made landfall on July 25. However, Raymond recalls recognizing his first COVID symptom on July 22.

“My first symptom was feeling like I got hit by a truck,” Raymond said. “I’ve never felt this way before. I didn’t get hospitalized until my 14th day of illness. When I couldn’t make it to the restroom anymore, I couldn’t make it. I couldn’t bathe myself. I was just extremely short of breath beyond anything I had ever felt before.”

As soon as the hurricane passed, Sofie called 9-1-1 for her husband.

Throughout Raymond’s hospitalization, the Fuentes received support and prayers from their friends and family. In fact, Sofie said she did not have to cook a single meal the entire time Raymond was in the hospital. The day the doctor called to tell Sofie her husband would be going home was the same day Sofie spiked a 104-degree fever.

In addition to fevers, Sofie experienced shortness of breath, which landed her in the COVID unit. While hospitalized, Sofie said one of the lowest points of her illness was when her oxygen levels kept dropping, forcing doctors and nurses to check her oxygenation every five minutes.

“I was more short of breath than I had ever been in my life,” she said. “I was struggling to breathe so badly. I couldn’t speak. And I got a piece of paper and a pen and wrote, ‘Ventilate me, please.’ And I kept pointing at the paper. The doctors said, ‘If we ventilate you, you’re not coming off of the vent. You need to breathe.’”

During her 15-day hospitalization, Sofie started to give up when she kept hearing a voice in her head that told her to “just hold her breath.” Sofie explained she knew she was dying and signed a do-not-resuscitate order, a decision she did not want her family to make. Despite being close to death, Sofie was still cognitive of what was going on around her. Her family camped out in the parking lot and was with her every day, holding encouraging signs, flowers, and balloons through the window.

“(The nurse) told me to turn and look at my dad. She told me, ‘Your dad needs you to fight. And your kids need you to fight,’” Sofie said. “At that point, I surrendered. But not to that voice that was telling me not to breathe. I surrendered, and that was the only way I would survive because I had no fight left. I had to tap into the divinity of the people in the room, like the nurse, doctor, respiratory therapist, and the CNA. It was God working through them. I had to fight with their strength. It was like every breath was a fight.”

Sofie fought minute by minute — and won. Toward the end of her hospitalization, she received physical therapy and learned how to walk and breathe again. Raymond explained that continuing to work as a healthcare worker on the pandemic’s frontlines was a responsibility he gladly took — despite knowing his health was at risk.

“We chose our profession not because of money, not because it was glamorous, but we like to help people,” Raymond said. “And most of our population is underserved, without resources, and we are their primary source for treatment. I work in the emergency room not because it’s the easiest. I work because I like helping people. I’m able to buffer some of the worst cases into something palatable or something tolerable.”

However, early in the pandemic, no one knew how the coronavirus would spread or how long or difficult exposure would be, according to Sofie.

“Things got politicized instead of just being told the truth and how to truly protect and equip ourselves,” she said. “It was a decision that we made knowing full well that we all could get COVID. We sat down at the table and prayed and had a very long conversation, and people need to know that those conversations happened all over the country. We talked about ‘Why are we in health care?’ ‘Why are we nurses?’ ‘Where are our priorities? ‘What does our community need?’ And we decided that (Raymond) would stay working in the emergency room.”

On March 2, Abbott announced he would end Texas’ statewide mask mandate on March 10 and allow all businesses to open at full capacity.

“It’s time to start moving towards more liberal restrictions. We can loosen up a little bit,” Melendez said. “But the last thing you do is eliminate masks and open up everything. Is that our goal? Absolutely. Were we there? I don’t think so.”

Melendez explained removing the mandate was premature but still sees most people wearing a mask regardless of the removal.

“(Wearing a mask is) a sign of respect and care for each other in our community,” Sofie said. “The mask is not really to protect you. It’s to protect everyone around you.”

Melendez added vaccinations have been significant in helping the Valley decrease its death rate to the national average of 1%.

“We’re getting around 20,000 vaccines a week. And they’re all gone,” Melendez said. “ [People] are waiting in lines and sleeping in cars to get the vaccine. The demand is so high.”

Although the Valley has been bearing the brunt of the pandemic, Sofie said she believes “some of the ways that put us at risk, like having a tight-knit community, has been what has gotten us through because we are used to showing up for our people.”

The Fuentes said that despite their circumstances, the fact they can lean on their family keeps them moving forward.

“COVID took so much from me. It took so much but also gave me so much gratitude,” Sofie said. “I don’t know if I’ll ever be the person that I was before, but this person is happy to be alive. We took the boys out to (La Lomita), and there was a wishing well. Everybody got a quarter, and all three boys made the same wish that I would get better, that I would be stronger. And that’s my prayer every day.”