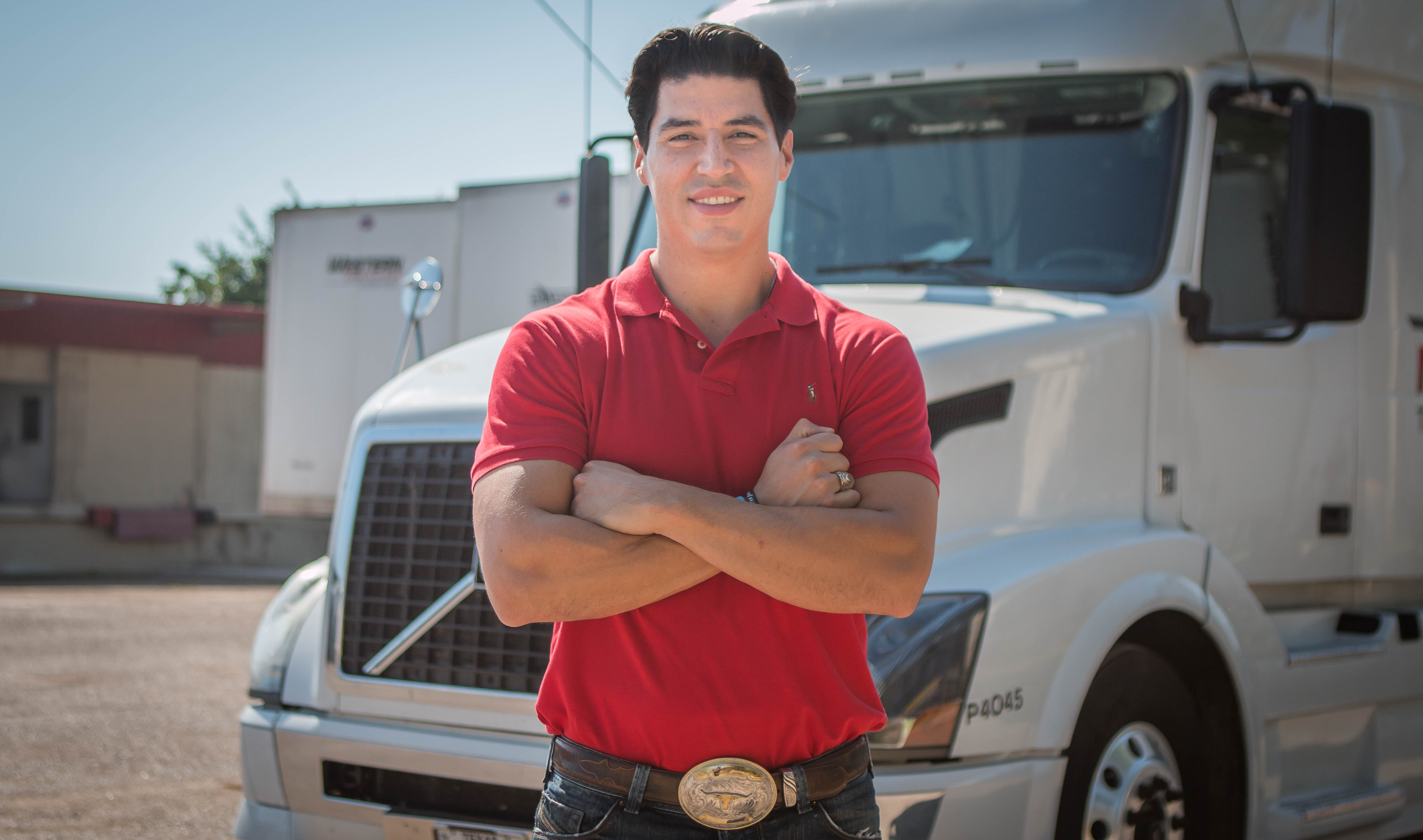 There is a certain amount of risk that goes into starting a small business, but it is a risk worth taking if it is one for which you have passion.  “They say that 9 out of 10 companies don’t make it past the first year and survive,” said Jimmy Aleman, CEO of Aleman Trucking. “I always believed I could start 10, if that is what it takes, to eventually have one that succeeds. ”

Owning his own successful trucking business has always been a dream of his, one he inherited from his grandfather.  “Trucking is in my blood,” Aleman said. While the success of a new business depends on many factors, including how you define success, the intimidating 90%  failure rate commonly believed to be true for first-year businesses isn’t entirely accurate. Actually, about half of all new establishments survive five years or more and about one-third pass the 10 year mark, according to the Small Business Association. Aleman Trucking has been around in various forms for over fifty years.

“Our family has been through many challenges and hardships, but these difficulties have made us stronger and wiser,” he said, explaining that learning from downfalls and never giving up also run in the family. “Even if you’re experiencing something that is on the way down, just know that’s not the end of your story. There’s always hope, a new opportunity around the corner,” he shared. He admires his father’s tenacity and attributes his drive to the example his father set.

“My grandfather, Paco Aleman, started it all,” said Jimmy Aleman, relating the family history.  “In 1950, he was right out of the Navy and bought his first truck. Grandpa Paco was still driving said truck in 1966, when he noticed a semi pulled over on the side of the road and decided to stop and help the driver out.” It was a fateful exchange that would result in retirement for the tired truck driver, and the jumpstarting of a career for Paco Aleman and two later generations of truck enthusiasts.  “The gentleman asked my grandfather if he’d be interested in running these loads of Pearl Beer to San Antonio and taking over his accounts. Grandpa agreed to the terms and Aleman Trucking was born.” Paco Aleman grew his fleet to four or five trucks before passing away in 1974, leaving Aleman’s 19-year-old father to help raise his seven siblings.

“My dad took over the company early in life, but it started growing,” he remembers proudly. Two years after taking charge, he bought his second truck.  He did every aspect of trucking, from driving to repairs to managing operations of what grew to be a 15-truck fleet by ‘89. However, the first Aleman Trucking ended up having a lot of challenges, and they lost the company in 1990. “My dad didn’t have a mentor to help him make the best decisions to avoid something like that from happening,” Aleman said. “I can’t imagine not having my dad there. He has 30 years of experience under his belt, and I talk to him every day. Being able to rely on that guidance has helped me out tremendously.”  Aleman was nine years old when they company went under, and it was influential that he never saw his dad quit after facing difficulties early in his entrepreneurial career.  “My dad built himself up during that time. He started another one in 2000 called USA carriers, with three trucks. Within eight years he grew it to 600 trucks. He was USA Carriers.”

Unfortunately, the success of USA Carriers was short-lived. “We went through a big challenge with that, some internal mistakes, and in 2010 we all walked away from the company,” Aleman said, explaining that he and his sister were working there with his dad, as well. “It’s a tough blow to lose your company,” said Aleman. “I don’t know many people who have seen those kinds of ups and downs, but my dad never quit. He’s the person I admire the most in the world and always will. Part of the reason we want to grow and succeed is because I’ve always seen him be the best he can be at anything.”

The second loss allowed the Aleman family an opportunity to step back and assess what was really important- their faith. “What we had left was God and family, and it brought us closer together to both.” He says that in retrospect, he had not been living for Him the way he could have, as explained by the Bible parable that talks about talents. “God blesses us with ability and we can work to honor him by using the talents as he intended.” Reigniting their faith also gave the family the perseverance to go forward. “We were OK with not building it up again, moving in a different direction if that was God’s will. But somehow, the opportunity arose to try again, so we did it,” he said, explaining how he acquired his first trucks through fortuitous business partnerships. Aleman plans to apply himself to moving forward with a sense of inner peace, knowing he’s doing things as God intended, even if it takes longer to grow or caps the expansion. “If I had the opportunity to grow, I would love to, but I want to do it the right way,” he said.

“I am passionate about fulfilling the destiny set forth before me. I am so grateful to God that He gave me an opportunity to resurrect Aleman Trucking, which I operate with complete honesty and integrity,” he said. “I strive to be completely transparent in all my dealings and to have the best paid drivers in the industry.” The company started last October with ten trucks, and has grown to 20 in about a year, with a total of over 1.5 million miles driven and counting.  “We don’t want to dwell on the past, but we know from experience we can do better. We want to move on and take the lessons that were learned to help us in the future. We believe we have the blueprint of how to grow a company and the one thing we have now that we didn’t before is Jesus at the center of our company. We tell our drivers, customers, and employees that we put God #1.”

Aleman says that growing up as the son of a truck driver, he knows the sacrifice made not only by the driver every time they hit the road, but also his or her family. “It is hard work. We want the drivers’ families to know we will take good care of them here. We want Aleman Trucking to be a place where drivers can know they prayed for, that if they need anything in terms of council we’re here for them. We want to make sure they have everything that they need.”