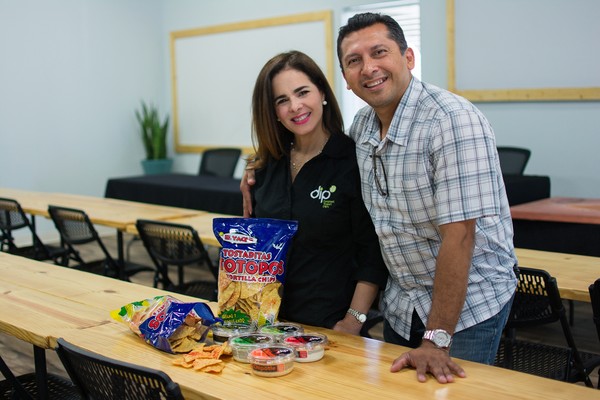 Located on the U.S.-Mexico border, the Rio Grande Valley’s taste palate draws from both sides of the river. Local restaurants and food stands that quietly serve up flavors as big as Texas to a dedicated fanbase become closely guarded Valley secrets; we don’t mind letting Austin and San Antonio fight over where the best tacos can be found because we know what treasure lies in our backyard.  However, there are some food experiences that simply need to be shared, and with a little help from a Mission EDC initiative, two local companies will be bringing their products to a far wider market.

El Yaqui Mexican Products (which includes tortillas, tortilla chips and tostadas)  and Dip It by Pilar (a Tamaulipas-inspired gourmet yogurt dip which also serves as a flavorful sauce) are soon to be discovered by foodies far from the RGV thanks to Ruby Red Ventures, an initiative that helps grow the economy in the Mission area by providing entrepreneurs with the tools they need to develop and implement a sustainable business plan.

All that and a bag of chips

Rafael Pacheco, CEO of El Yaqui Mexican Products, didn’t just pass through the Ruby Red Ventures initiative. He actually played a vital role in the program’s development when he went to the Economic Development Corporation seeking assistance after he moved to Mission. Starting a business requires long hours and funding is often scarce since startups are risky business for banks.  While most local EDCs have programs in place to attract big companies to their city, most do not have anything in place to help out entrepreneurs. Pacheco made his case to the EDC regarding the need to support individuals with business dreams.

“We had seen other businesses like Rafael’s and could not help them,” said Mission EDC’s CEO Alex Meade. “After Rafael, we finally decided to do something about it. Thus, we started Ruby Red.”

Ruby Red is structured so that participants attend workshops given through the UTRGV Small Business Development Center. They then present their plan to local business leaders in a competition reminiscent of “Shark Tank.” Ruby Red accepts participants twice a year with the potential to award $50,000 each round. While each company is eligible to receive up to $25,000, most of these startups say the real benefit to participating in the program is the knowledge and support Ruby Red Ventures provides. “I think what Ruby Red is doing is awesome!”  Pacheco says.  “I think that’s what more cities in the Valley should do to improve the economy.”

During his presentation to the panel of local business leaders where he introduced El Yaqui’s business plan in hopes of being selected for the Ruby Red award, he gave the jury a sample of his chips.  However, he realized he needed something just as appetizing to accompany them.  He turned to his friend Pilar Gonzalez and her savory yogurt-based dip.

After retiring from the exciting world of radio and television, where she held positions at the national level for such networks as ABC, Univision and Telemundo (and even won an Emmy!), Gonzalez retired and decided to pursue her passion for cooking and opened up a restaurant. When she sold her venture, people still wanted the dips her restaurant had featured. She began to manufacture them at home.

“My aunt was making these dips in Victoria, Tamaulipas, Mexico,” said Gonzalez. “She taught me 25 years ago how to make them.”  These uniquely spiced dips are versatile and can be added to a variety of dishes as a sauce or garnish. The zesty sauce that came to be known as Dip It comes in five flavors both familiar and exotic at the same time.

When Pacheco paired his chips with Dip It , the panel of judges loved his chips as a vehicle for the bold flavors of her dip.

El Yaqui Products was awarded $25,000 in the inaugural round — the largest award a single company can receive. Ruby Red Ventures helped Pacheco grow his company into what it is today: a success by any measure of the word. All Alamo Draft Houses carry El Yaqui’s tortilla chips, and he is in seven H-E-Bs Valleywide to  date.

Pacheco urged Pilar to apply with Mission EDC to take her dips down the same path as his line of products. “I didn’t know Ruby Red existed,” said Gonzalez, but she went through the process, and was awarded in the next round. The  $25,000 award got her out of her own kitchen and into an industrial kitchen located in Mission.  She was also able to purchase much-needed equipment and hire a design team to create a new, modern logo. Through Ruby Red, Gonzalez also connected with H-E-B’s Primo Picks: Quest for Texas Best.  She entered and received second place, which came with a $15,000 award.

Tastes of home, such as cilantro, chile piquin,  jalapeño, olive and chipotle are sometimes hard to find on chain store shelves, but by July 2016, Pilar’s product will be found in every H-E-B in Texas. Spec’s, a sister company of our local Feldman’s, will also soon be carrying Dip It in all its locations.

Speak with either Pacheco and Gonzalez and they both are passionate about their products. They  testify to the hard work entrepreneurs face, but are eager to encourage everyone to pursue their dreams of starting their own business.  “The most import thing Ruby Red has done for me is believe in me,”  Gonzalez explains. “They make you dream big and accomplish what you aim for. They are very involved; they follow you to make sure you have all the elements and tools to succeed. It really makes a difference.”  In helping these two companies grow, Ruby Red Ventures is helping to share the flavor of the Valley with the rest of Texas.

If you have an idea or are looking for support to expand your business, Ruby Red Ventures is accepting applications twice a year.  Visit their website for more information.