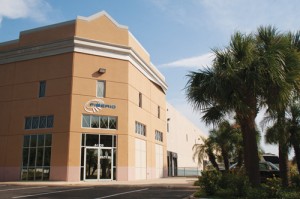 From its inception in 2009, to its current status as a game changer that is energizing the concept of manufacturing in the Rio Grande Valley, leaders at McAllen-based FibeRio, say that Forcespinning™ technology is changing the nonwovens industry for the first time in 30 years.

With a mindset focused on unlocking nanofibers commercial applicability to companies around the world, FibeRio specializes in producing fibers one-one hundredth the size of a human hair used in nearly endless ways from filtration to wound care bandages.

“It truly is a disruptive and enabling platform technology. It opens up whole new worlds that weren’t available in the past because no other technique enables enough nanofibers to be produced cost effectively and therefore, be commercially viable.  “Forcespinning technology was developed specifically to solve this problem”,” said Ellery Buchanan, President and CEO of FibeRio.

The applications for the specialized fibers are endless, Buchanan said. In the area of filtration alone, which in itself is a $70 billion industry, FibeRio is making an impact by developing new materials for air filtration, liquid filtration, blood cleansing or pool cleaning. It is also on the cutting edge of non-woven applications, which include everything from diapers, surgical gowns, or acoustic materials used in vehicles.

In the textile industry, priorities are placed on capability or functionality of the material, which is an area of specialization where FibeRio is constantly developing, Buchanan said. Utilizing a “continuous process” means the company can accommodate anyone who wants to make fibers from a variety of different polymers and materials in large quantities.

“There are just so many of these opportunities. We wanted to enable the world and all the various industries to come up with their own materials and their own end products,” he said. “There are opportunities in this geographic region as well. It means not only working with other companies and suppliers, but also us selling the technology to other companies. Because of our wide applicability, we can sell it to a lot of different industries.”

FibeRio has the distinction of being the first technology start-up company developed at the University of Texas-Pan American. Through the research of Dr. Karen Lozano, and Dr. Kamal Sarkar, both engineering professors at UTPA’s Mechanical Engineering Department, Forcespinning was taken from concept to reality. FibeRio was initially created through collaboration between UTPA’s Office of Innovation and Intellectual Property (OIIP), state and community leaders and a capital venture company, which resulted in the creation of FibeRio Technology Corporation in 2009.

That year, UTPA received a UT-System Texas Ignition Fund grant that funded both the prototype development and the plan to eventually commercialize the technology, the latter of which Buchanan worked very closely with the university.

In 2010 FibeRio was awarded a $1.5 million Commercialization Award for the development of the company’s trademarked “Forcespinning” technology from the Texas Emerging Technology Fund and secured private financing led by Cottonwood Technology Fund, a venture capital firm based in El Paso.

“The response has been overwhelming as far as the interest. We hear things like this industry hasn’t had a revolutionary concept like this in 30 years,” Buchanan said. “This is what we need to enable nanofibers to realize their true commercial applicability.”

With a goal to enable the world to come up with their own nanofibers, FibeRio has begun marketing the technology to various industries. The company has begun the process of offering industrial scale nanofiber production systems for customers interested in creating their own end product.

“We have a product roadmap that takes us from here to the next level of productivity. We are talking about a further enhancement of the output of these systems,” Buchanan said.

He went on to say, “As an equipment company we are able to capture value from the entire range of applications for nanofiber technology. It also enables us to leverage the many benefits of the Rio South Texas region like a skilled workforce, access to innovative university research and geographic proximity to the world class manufacturing cluster and supply base in northern Mexico.”