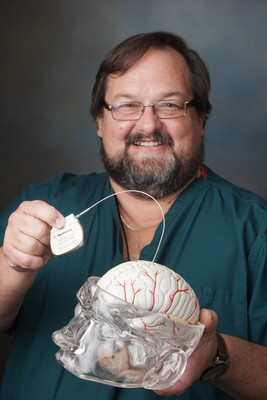 Many people know from personal experience, or witnessing their older relatives or friends develop a trembling in the hands, that they didn’t always have this problem. Parkinson’s disease is progressive; often tremors begin in one finger before slowed movement and speech changes become readily apparent. So far, there is no cure and new medical advances can be very rare for diseases like Parkinson’s that affect the central nervous systems of an estimated 7 to 10 million people worldwide. Fortunately for South Texan individuals suffering from tremors (one of the most debilitating aspects of the disease), there is a surgical option that can make them disappear completely. Dr. Betancourt, an experienced neurologist who has clinic hours in McAllen, Harlingen, and Brownsville, is trained to surgically install a device called the Deep Brain Stimulation (DBS) implant to improve the quality of life of his patients.

Up until deep brain stimulation (DBS), the only option for people with Parkinson’s was medication, which can cause complications such as dyskinesia after several years. This is the medical term for the reduction in effectiveness of medication experienced as the body builds tolerance to the drugs; increasing dosage is required to get the same effect. Eventually the drugs may lose all effectiveness. At this point, the patient becomes a candidate for DBS.

The way the device works is fascinating. It is similar to a pacemaker in that it is placed inside the chest, but with flexible leads that are attached to the brain. Everything is under the skin. The device then sends electrical signals to the brain and movement is more easily controlled. Manny Molina, a Medtronic sales representative for the DBS devices, says side effects are minimal and most can be fixed by reprogramming the device.

For the people suffering from late stage Parkinson’s, Molina cannot stress exploring their options enough. “Most patients that I meet have never really heard about this surgical option,” he says, which is unfortunate as he has seen how the device can change a person’s life. “They go from being very rigid and stiff to actually being able to walk to and from the bathroom, or in and out of their car,” he explains. Molina partners with Dr. Betancourt, who has done over 100 lead placements  involved with the DBS treatment, so that RGV residents don’t have to travel far from home for the surgery. Both he and Dr. Betancourt get a lot of satisfaction out of helping someone with this disease see that there is still hope.

The DBS device greatly improves quality of life, restoring mobility and function as the patient experienced before the onset of their Parkinson’s. Patients are able to live as they were accustomed to; standing and walking, holding and playing with their children and grandchildren, and generally performing daily activities of their choosing without the tremor.