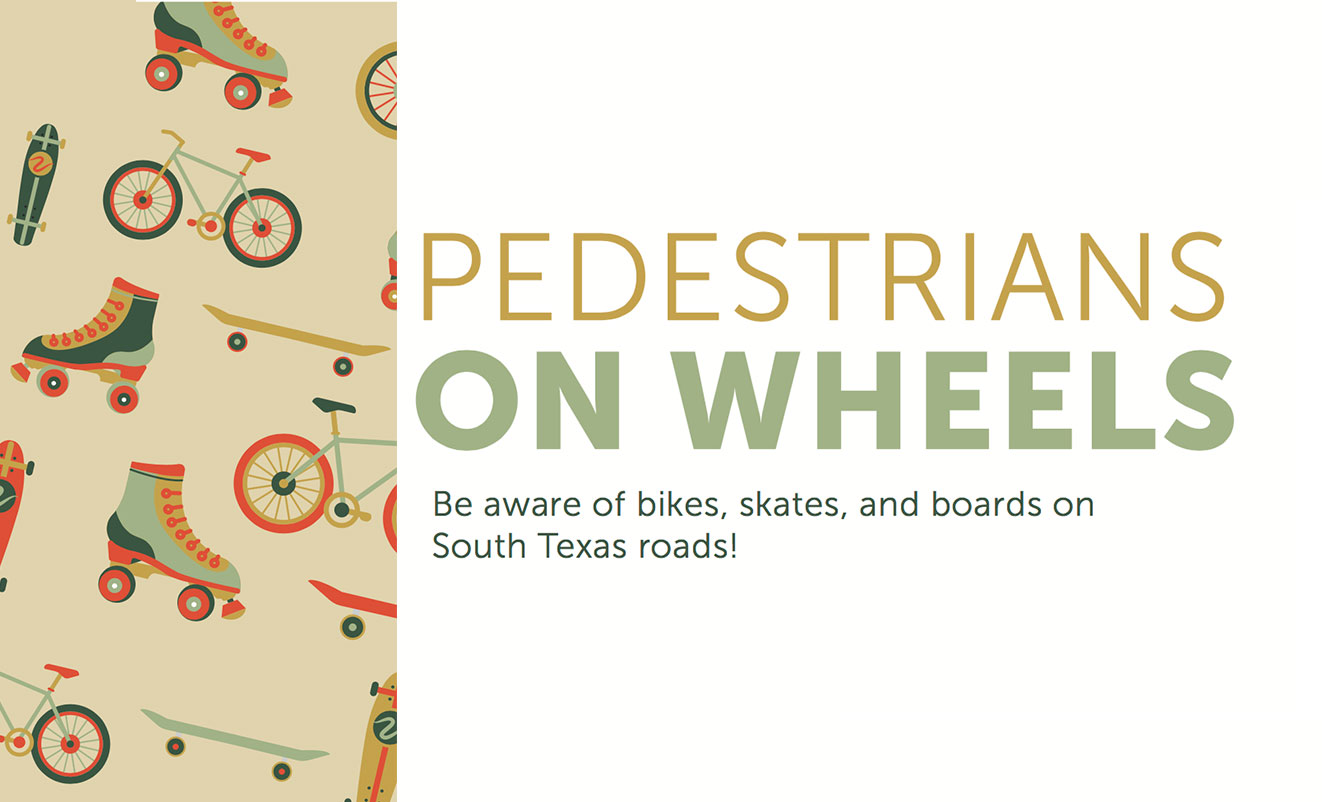 Be aware of bikes, skates, and boards on South Texas roads

As the RGV has continued to grow at an exponential rate, cities across the Valley have taken steps to make our thriving area more pedestrian friendly. Whether for transportation, exercise, or just plain fun, bicycles, skates, and boards have made a comeback, and every day, people are choosing to get outside and ride. As drivers, we always take extra care to watch for people at crosswalks and in school zones, but as we share the road with cyclists and skaters, we need to remember to watch out for these pedestrians on wheels.

Henry Roberts, long-time owner of Bicycle World, knows a thing or two about bicycles. Having been in the business for 40 years, he has practically seen it all and has a great perspective on the history of biking in the Valley. According to Roberts, when he took over the business from former owners who originally opened the shop in 1952, there was little to no competition in the area, and cycling was not anywhere near as prevalent as it is today. He remembers days when his store was busiest during the holidays, with parents coming in to find that perfect gift and children’s bicycles hanging along every wall. Nowadays, Roberts has seen a major increase in adult interest in cycling. With races like the recent 27th Annual Jalapeño 100, hundreds of riders join in to ride anywhere from 12 to 100 miles.

These days, when you are out and about, you will almost surely see someone cycling or skating.  Thankfully, cities from Brownsville to McAllen have long been preparing for the ever-growing trend with some amazing infrastructure accommodations to keep pedestrians safe. “Of course, when it comes to cycling or any sport, safety is the main priority,” said TxDOT Public Information Officer Octavio Saenz. He pointed out that when cyclists choose to ride on the road, they have the same rights as well as the same responsibilities as vehicles. “An awareness and level or respect in which we all follow the rules of the road is important,” he added. “We don’t live in a vacuum. We work together, live together, and ride together.” If you choose to ride on the road, always use proper signaling, go with traffic rather than against, and never ride without potentially life-saving equipment, including a helmet and reflective gear.

Recently, McAllen, Harlingen, and Brownsville have implemented bike share programs with stations strategically placed in parks and public spaces.  McAllen led the way with their BCycle program rolling out in the fall of 2015 with 80 bikes at eight different locations. The University of Texas Rio Grande Valley was not far behind, partnering with the cities of Brownsville and Harlingen to bring bike sharing to the Lower Valley. The group enthusiastically welcomed the City of Edinburg to the club this past January when they unveiled four bike stations with 20 bikes. Using a bike share is a great way to get from here to there, try out something new, and get some exercise while you’re at it.


For those of us who did not grow up riding bikes or skating in the streets, getting out there for the first time might be a little intimidating. Cars seem faster and larger than when we are riding in them, and some of us might even be a little embarrassed that we won’t be good at it. Also, as we get older, our bodies may not adapt to new things quite as quickly they used to. The great thing is even if we don’t want to get out in traffic, there are so many opportunities for biking and skating on trails and in parks all throughout the Valley. You can find kids, parents, and grandparents spending time at thriving skate parks like the one in Los Fresnos, others birdwatching as they enjoy the hike and bike trail at Bentsen-Rio Grande Valley State Park, and people seeing the city on some of the excellent trails in Brownsville and McAllen.

Cycling, skating, and boarding can definitely be a blast, but these activities boast so many other benefits. In recent years, Roberts has seen cycling become a very social event. Instead of meeting for happy hour, groups often meet up after work and go for a cruise or even a 20-mile ride. The social aspect often becomes the main draw, and as an amazing side benefit, people begin to lose weight and even combat ailments like depression. “So many people out there have this stigma about a bike as a toy, but when they find out what it can do for you, it’s worth so much more,” Roberts said.