In a revised business plan, Photon8 is abuzz with investor conference calls and ongoing discussions to market its various plant projects.

Inside the cavernous International Technology, Education and Commerce (ITEC) Center in Brownsville, Photon8’s President and CEO, Brad Bartilson is spinning with new product, market and investor options, and is now eager to move this from today’s small outdoor production facility and onto a production format.

“We’re at that stage between pilot and demo, and then you go to production,” Bartilson said. “We have two years to get to our goal of an operating demo plant for 33,000 gallons a year. It will be a scalable unit. Two years to get our demo plant running, and then the next year we have an expansion schedule that takes five years to reach 100M gal/year.

The goal is: to have thousands of acres of sun-splashed flatlands near sea water to produce millions of gallons of lipid, carbohydrate and protein products. It’s a mammoth enterprise operated and maintained by hundreds of locals within this job-hungry community, which so far has fronted $300,000 in local funds through the Greater Brownsville Incentives Corporation (GBIC) to fuel Bartilson’s project.

With background in “supercomputing, semiconductors, secret government programs, and high-challenge, high-tech things,” Bartilson says the company touts its first work in biofuels, and its new business plan highly focused on Omega3, of which they are currently producing product samples into the nutraceutical industry. Those companies will then render Omega3 into products with potential health and medical benefits.

In anticipation, Photon8 has just created its Omega3 Advisory Board, which includes a highly-published doctor, and an Omega3 market and business expert.

“It’s true that much of the venture community is negative on algal biofuels, but there is much excitement and interest for Omega3s,” he said. “As we build the Omega3 business, we’ll be building validation of the fuels business as these products come simultaneously.”

Before coming to Brownsville, Bartilson had a corporate job in the semiconductor sector in New Jersey. It was there that he bumped into an opportunity when a Wall Street friend asked him to take a look at algae.

“I asked ‘what do I know about algae?’ He said ‘I think you’re a smart guy, and nobody’s doing it right.’ So I started building techno-economic models,” Bartilson said. “I take a system’s perspective, identify the bottlenecks, what are the variables and relationships that determine profitability? And from models, I took real algae farm data, collected them into a techno-economic model, and so it was obvious that capital expenditures were a big problem.”

Identifying that productivity in this photosynthetic process is a function of light. Bartilson named the company Photon8 because it takes 8 photons to fixate one hydrocarbon molecule.

“That means you can produce so many gallons of oil per unit area per year,” Bartilson said. “We had people across the country getting millions of dollars who were telling other people how they could create a million gallons per acre per year, (but) the realistic limit is 10,000.”

Bartilson said he had pondered moving the project to South Texas where there were inexpensive flatlands near seawater and on average, 24 percent more sunlight. At about the same time, he said, a friend pointed out that “not only could you get more sunlight, seawater and land here, but there’s this Emerging Tech Fund.”

Bartilson said most of the early grant money had backed freshwater algae research, ignoring the fact that algae— the green slimy stuff that apparently thrives in warm climates like those in South Texas—can be grown in salt water, and that freshwater was an “ever precious” commodity.

“I can’t understand why (Department of Energy) people were selecting fresh water algae at other companies because of that very fact,” Bartilson said. “We have rising seas. Nobody is going to get upset about sea water; it’s free. We have irrigation that’s being shut down in North Texas and Oklahoma because the aquifers are drying up.”

The work at Photon8 is picking up as an oil-industry project is about to begin. He is currently moving forward with creating an Omega3 by-product from his algae/biofuel research, which he believes can be lucrative.

“The investment community has a herd-like mentality,” Bartilson said. “When an investment goes south, it’s very hard to get it to come back in. “

So where’s the herd now? Biofuel investors are still pretty negative on algae, but Photon8 has had the fortune of seeing the mistakes of the first algae-biofuels ventures and instead focused on developing working, profitable solutions.

“The upside is, after the failure of the first ventures, the future is now looking brighter,” Bartilson said. “We’ve proven to a few investors that we have the right solution. The money isn’t pouring in, but it is coming in. We’re doing business the old-fashioned way. We’re earning it as we go.” 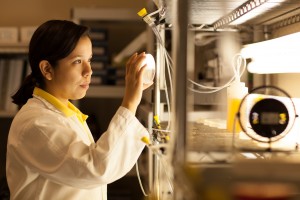