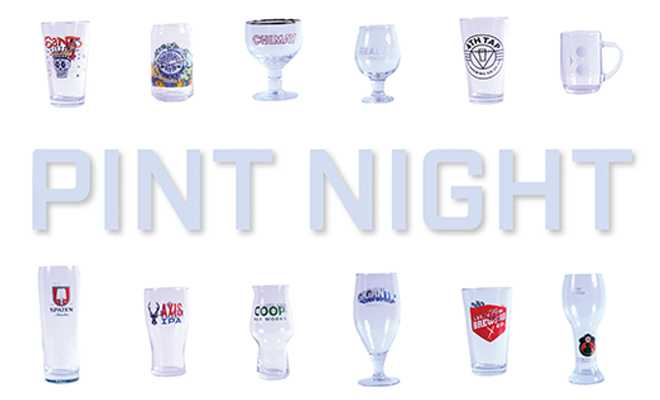 Search “pint night” on Facebook and these days, you’re likely to get multiple hits from events at bars and restaurants across the Rio Grande Valley. For the uninitiated, these events generally feature a brewery or particular beer. Customers who attend and purchase the beer on tap receive a branded piece of glassware in a range of different shapes and designs that they can take with them — usually for free with the first pour.

“We do a combination of flagship beers to spotlight pint nights and sometimes we do the off-the-wall, funky, weird beers,” said Genesis Moreno, general manager at Grain to Glass in McAllen. Those unique brews can include co-fermented or barrel-aged beers. “The idea is to introduce people to craft beer by allowing them to not only try the beer, but remember the experience. By letting a guest leave with a glass, they take the experience back home with them.”

Response from the community has been overwhelmingly positive, Moreno said, and pint nights are among the busiest nights at Grain to Glass.

“It’s kind of cool to be able to have people leave and still be connected with Grain to Glass or a brewery,” he said. “It’s just a way of introducing new breweries and recipes to people.” He added that customers can also use the pint nights as a way to identify styles and brands of beers they like so they can purchase those same brews later at the grocery store.

Typically, pint nights at Grain to Glass take place each Wednesday, but recently, the restaurant and ale house has expanded the experience.

“We did a super pint night last year where we just put all our pint back stock and just said, ‘you know what, pick a brewery,’” Moreno said.

Patrons can pick and choose from the glassware that Grain to Glass has collected over the course of their pint nights.

“I think it’s a really great way for people from different walks of life to be able to come in together and have a common interest,” Moreno said, emphasizing that Grain to Glass is a family-owned establishment that opens its doors to families. “We just really do our best to provide that service to where it allows people to connect. It’s just making craft beer accessible.”

The Quarter New Orleans Kitchen and Tap Room usually schedules weekly pint nights at 8 p.m. on Thursdays. The Quarter is a Louisiana-themed restaurant, so Abita beer promotions are common. Otherwise, the team there tries to make sure they have a variety of different beers for guests to try. Some of the most popular pint nights feature local beers from 5×5 Brewing Company and Big River Brewery.

“They love it. We have a real good turnout,” Galvan said of guests’ response to pint nights. “They like to get familiarized. Sometimes they don’t always agree with the beer, sometimes they love the beer, but they get to know exactly more along the lines of where their palate’s at.”

The ideal event for Galvan includes the opportunity to meet first-time guests to the Quarter while helping them experience new things.

“Down here in the Valley, they stick to a lot of their basics, so this gets them to kind of branch out,” he said.

Developing the RGV’s taste for craft beer has been Roosevelt’s at 7’s goal for more than a decade.

“If you’ve never had craft beer before, you come in here and we’ll find something just like you drink at home just to get you started — but a little bit better as far as more flavor,” said Steven “Opie” Schwoerer, Roosevelt’s general manager. “If you want to get wild, we’ll just go higher and higher — all the way up.”

Pint nights have been a part of that mission since the beginning. Now, though, with the prevalence of pint nights at establishments throughout the region, Roosevelt’s and Schwoerer look to offer more at the events.

“It’s not just glasses anymore,” he said. “We try to just step it up a little bit, do other stuff.”

This includes tap takeovers, where Roosevelt’s features multiple beers from the same brewery to offer visitors an immersive experience, swag packages, or raffles. The vision is to offer an experience that people could only have if they visited the brewery in person — something that they might not be able to do, Schwoerer says.

Some of the most popular pint nights in his experience have been people who are a fan of the brand or brew, such as Karbach Brewing Co.’s collaboration with the Houston Astros on Crawford Bock. Other draws are unique glassware shapes from tulips to tekus.

However, in Schwoerer’s opinion, “I think the beer’s more important than the glass,” said Victor Galvan, general manager.

Use Facebook to stay up to date with pint nights at Roosevelt’s at 7: @Rooseveltsat7pm; Grain to Glass: @graintoglass; and The Quarter New Orleans Kitchen and Tap Room: @thequartermcallen.