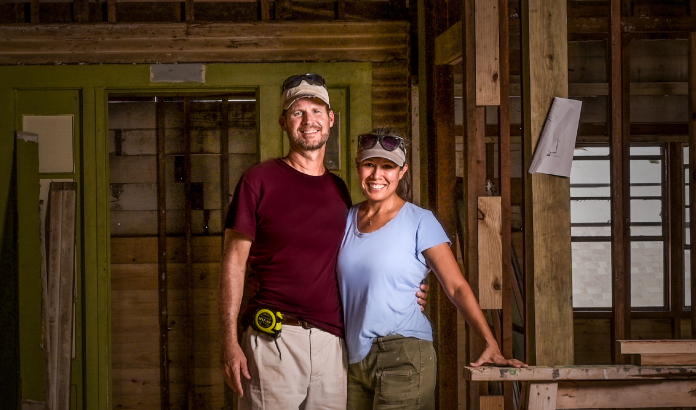 Editor’s note: This story was written during the building’s restoration in the fall of 2022. The Beast on Main is now celebrating a renewed look as we enter the new year. 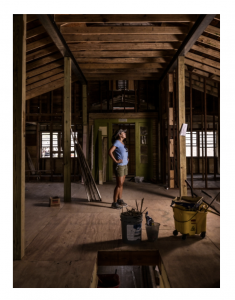 The entryway to a 1930s building located off Main Street was ripped apart. The paint on the banister — paint that was decades old — was stripped away, revealing the original wood. Through the distress of the renovation, the building seemed to sag. The weight of many years of neglect was almost tangible. But there was something stirring in the beams — the bones that held this building together. It was as if the building was taking a deep breath, ready to exhale many more years of life.

Marc and Angela Millis have been renovating old properties in McAllen’s historic district for several years. The couple restores the buildings and leases them to small business owners, allowing them to flourish in the beautifully renovated spaces. They have also worked on several residential projects, including apartments, lofts, and houses.

“We don’t tear down these houses,” said Angela as she carefully tiptoed over boards. “It’s like every person has a story. Underneath the layers we mask ourselves with, there’s a true authentic story to us. Every house has its own authentic story, too. It’s kind of neat.”

Among their notable commercial work includes Southern Roots, a fresh flower market. The beautiful building kept most of its historic integrity, as many of the Millis’ projects do. A newer renovation is Modern Vintage, with beautiful original beadboard and wooden floors. The building is now a vintage boutique, holding even more historic elements within. Both stores are located on Main Street in McAllen. 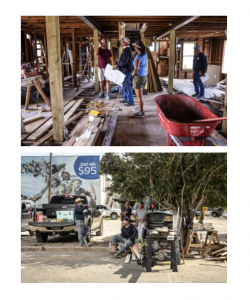 Every project is given a name, and one in particular — “The Beast” — earned its moniker due to being in such bad shape. But with hard work and lots of attention to detail, she has become “The Beauty.”

The large two-story building is located at 321 N. Main Street and was, for a long time, a men’s boarding home. The building looked worn as the sun beat down on it. The blighted property has been standing since the 1930s and holds so much history, but over the years, had been neglected and had lost its original charm.

The couple has a team of construction workers and works with structural engineers to ensure the safety of the construction. The inside of the building was gutted. What once was sectioned off into many boarding rooms and a community bathroom is now an open space with an office and a large photography studio upstairs. A large window was added for natural light, and custom-made duct work gives this modern vintage style an industrial flair.

“The historical significance that this building has seen on Main Street of McAllen  — it just wouldn’t feel right to scrape it and build new,” Marc said. “I think it’s important for cities and leadership to understand that preserving buildings and structures that have a historic significance draws people in. 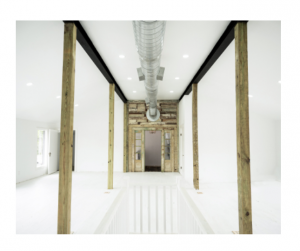 “People are drawn to the energy from way back that you can’t replicate from a new structure.”

The couple has been renovating buildings since 2013. Their first five-year goal was for Marc to leave his corporate job, and that opened up the opportunity for them to work together and do what they enjoy: breathing life back into old properties.

“It’s not about us, it’s about what we’re bringing back to the community and what she (The Beast) is now going to add here,” Angela said. “New stories will be created so that over the next 20 to 50 years, people can continue enjoying these pieces of history.”

The couple hopes to see Main Street become even more walkable, opening opportunities for people to get outside and walk from boutiques to restaurants.

Much of The Beast’s original materials were kept. From the original hardware to original glass taken from old windows and re-used on smaller windows, every bit of the home is salvaged and renewed. The banister was scrubbed down, sanded, and sealed — the veins of the original wood noticeable once again.

The exterior kept its original 90-year-old wood for the most part, and all the windows are now double-paned. Large piles of wood taken from around the home were salvaged and used throughout the building’s exterior and interior.

The team even found a Bible hidden in a wall. They decided to place it back, framing it so it can be seen. Unsure of why it was placed there in the first place, Angela could only speculate that somebody needed it at one point in their life.

“That’s what makes it so special when you find things like that,” she said. “You’re giving life, a pulse back into these homes.”

Hope is given back and the sad energy that was palpable in the home slowly began to lift. And just like people, homes are a work in progress. Whatever “The Beast” was in the past, she is no more and cannot be defined by that. This restored building is now the new space for Nicole Gates Photography Studios, where families, brides, and professionals will come and have their moments in history captured.

“I talk to the buildings and say, ‘We are going to bring you back to your original glory,’ and she (The Beast) has shown up,” Angela said. “It feels like she is smiling again.”

Over the course of this home’s life, it has kept many stories, and now she is ready to create new ones, retelling old ones in the process. She is a part of making Main Street vibrant and inviting.

“We’re bringing life back to downtown McAllen that for a long time has had a negative stigma,” Angela said. “We hope to bring it all together. This historical puzzle we’ve been working at for many years will be something for generations to see and enjoy.”