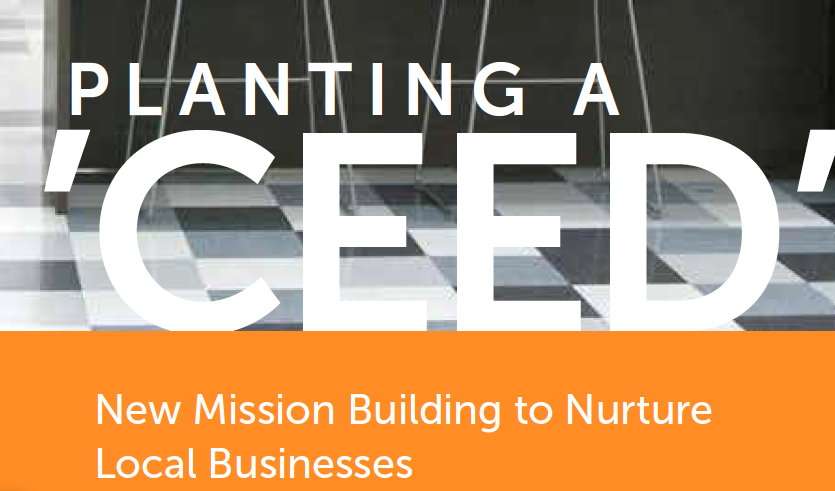 After two years of planning and construction, the Mission Economic Development Corporation is unveiling the city’s first ever technological hub.

Opened to the public Oct. 12, Mission’s Center for Education and Economic Development — CEED — building serves as a coworking space for business professionals.

The 55,000 square foot location on the corner of North Bryan Road and Business 83 contains classrooms, computer labs, offices, a lecture hall, media lab, conference rooms, a coffee shop, and 285 open floor seats. Some of the organizations that will be housed in the CEED include Sylvan Learning, Schreiner University, Teach For America, PeopleFund, and various startups that have come out of the Mission Ruby Red Ventures program and other Mission programs.

According to MEDC CEO Alex Meade, the building was purchased by a local investor who was hoping to lease the building out to retail tenants and requested Meade’s help in selling it. However, once Meade and the MEDC saw the building, they realized they could use it to house most of their programs, as the original headquarters for the MEDC was too small to do so.

“With Ruby Ventures alone, we’ve had 180 entrepreneurs go through it and we fund 10 businesses a year from it,” he said. “We could fill up this building with offices for those businesses alone. Ultimately, we hoped to create an environment for local business leaders that will nurture innovation within the community as a way to invest locally in our own community. If we don’t invest in our own community, how can we expect others to invest in us?”

Meade and the MEDC convinced the property owner to lease the building to them and then renovate it. A total of $6 million was spent on renovation while the MEDC chipped in an additional $2 million for IT and furniture.

The CEED building is split into three wings — Education, Entrepreneurship, and Technology — with each wing housing businesses or programs with the intent of creating a culture of collaboration and creativity.

Among the ways that technology will be implemented, the CEED building will be housing a 12-week coding course for adults that was developed by nonprofit organization Code RGV and funded by MEDC, Workforce Solutions, and the Texas Workforce Commission.

The public will be allowed access to the building to use it via a monthly fee that can range from $35 for college students to $200 for entrepreneurs. Different fee levels grant access to different CEED services — such as classroom or lecture hall reservations and 24/7 access to the building. Among the amenities a membership includes is free coffee from Jitterz Coffee Bar, which will open a second location inside the building.

“We don’t just want to create a tech hub, we want to develop talent and we have found that teaching computer science skills is a skillset that can apply to any industry anyone goes into,” Meade said. “Coding, for example, can teach you about logic, problem solving, and critical thinking.

“At the end of the day, if you have a better educated workforce, you can recruit better companies. If you have a workforce that only knows how to work with their hands, they will never be recruited into high paying jobs.”

Jon Stevens, the managing director for Teach For America, is already seeing the CEED building improving his organization.

Teach For America moved into the building in the middle of September after their lease in their original location expired. According to Stevens, the original office for TFA in the Neuhaus Tower on 10th Street and Business 83 could not accommodate large classrooms to train teachers. That’s expected to change in the new headquarters for the organization.

“In the past we could not hold a class of more than 15 people in our original office,” Stevens said. “We’ve had to hold those trainings in rotating locations between different schools in different towns. Here, though, it’s much more convenient having so much shared classroom space and lecture hall that we can utilize within walking distance of our office.”

The organization first heard of the of the CEED Building from Meade, who serves on TFA’s regional advisory board. According to Stevens, Meade explained to the organization how the building would serve as a networking hub for different people from different businesses  to ensure the city of Mission develops local talent.