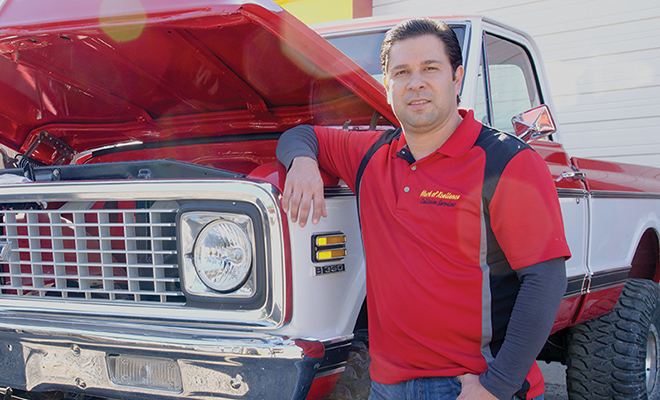 Working in a body shop runs through Chris Cruz’s blood like oil through an engine. Cruz grew up in and around his grandfather’s body shop in Houston and watching his eight uncles painting automobiles. After years of owning successful body shops in Houston and San Antonio, Cruz and his wife moved back to her hometown of Pharr two years ago and opened Mark of Excellence Body Shop.

“I love it down here. It’s a slower and more relaxing lifestyle. I just love it,” Cruz said. “I had some body shops in San Antonio, and so I wanted to open a shop down here where I could keep it smaller and be more one-on-one.”

As long as Cruz can remember, his grandfather was working in the body shop and he started joining him from the time he was knee-high. “Right out of high school, I knew what I wanted to do,” Cruz said. “I had a heads up on all the trade school classes and training.”

Eventually, Cruz took over his grandfather’s body shop, Quality Paint and Body. After selling the Houston shop, he moved to San Antonio and opened Affordable Collision and then Master Match. When he moved down to the Valley Cruz wanted a name that highlighted his drive to leave a mark of excellence on every vehicle that comes to his shop.

“When you get a vehicle, it’s like a canvas of art,” Cruz said. “I love the challenge of a job that comes when an insurance company wants to total a car and I talk them out of it. . . . I love to deal with a total and bring it back to where it’s supposed to be, and sometimes better than the factory standard.”

Taking expert care of his vehicles is only half of Cruz’s winning formula to owning successful body shops. “I have an open-door policy where in you are more than welcome to come into the shop and see what is going on with your vehicle,” Cruz said. “I make sure every customer is taken care of 100 percent. I’ve had a lot of good referrals, and my customer base is still growing. I have not had one dissatisfied customer.”

Cruz takes pride in the work Mark of Excellence puts out, and is always willing to get back in the shop, roll up his sleeves and get his hands dirty working. “I’m not one of those owners who just sits out front,” he said. “If I work on your vehicle, it’s going to get done right. If you’re looking to save a dollar then I’m not your guy.”

In addition to repairing damaged cars, Cruz loves to restore classic cars. Lately, he’s been working on a ’68 Chevy Camero, a ’70 VW Beetle, an ’89 Jeep Wrangler, a ’72 Chevy truck, a ’71 Chavelle and a ’65 Mustang. “As far as restorations go, I love the Chevys,” he said. “But as far as modern vehicles go, I love high-end vehicles because I appreciate the quality that goes into them.”

Cruz’s grandpa instilled in him a love of car restoration that he is now planning to pass onto his son. He thought one of his four daughters was going to follow in the family business, but they’ve all found other passions. But Cruz has plans for his son who is still in diapers.

Cruz said, “He can be a doctor or a lawyer, but he is going to know how to paint a car!” Cruz is going to keep auto-body restoration flowing through the family’s blood.