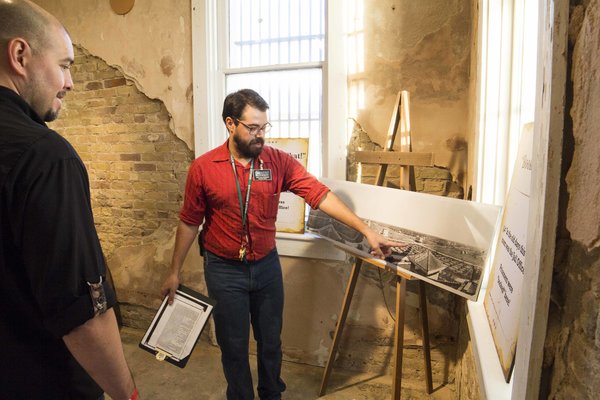 A Registered Historic Texas Landmark in Edinburg, the 1910 Hidalgo County Jail is the cornerstone of the Museum of South Texas History.  The site of two hangings, it has seen countless visitors since the museum’s founding in 1970.   Some visitors seek a super-natural thrill while others view the site more somberly.  For the thousands of school children who tour the museum to learn about regional history, it is often the most memorable highlight of their visit.

Closed pending renovation, the 1910 Jail has not been available for viewing.  On Jan. 14, 2016, however, an intimate gathering at a happy hour event provided an opportunity for the public to have a good look at the Jail’s condition and the need for repairs.  Tours offered visitors a chance to experience the hanging tower, while the room where prisoners were held, the “Tank,” held a live band and other activities.

Built in 1910, the 2,965 square foot Jail was quite advanced for its time, but its cracked and spalling walls—suffering significantly from “rising damp”— give it away as one of the oldest buildings in the community.  “The groundwater table in Edinburg has risen significantly since the jail’s construction, and because its footings and walls are made of local brick they absorb the groundwater like a sponge.  The water wicks up through the walls, rotting wood and corroding metal structural components,” explains Shan Rankin, executive director.    “A variety of efforts have been made to stabilize the jail, but when those repairs did not last a decision was made to make the level of repairs that would preserve the jail for another 100 years.”

Development Officer Lynne Beeching says the damage to the building has been monitored for many years, and the time to make repairs is now.  Beeching believes preserving the 1910 Jail is vital to the museum’s mission.  “There aren’t that many century-old buildings left since they usually get torn town,” she says.  To ensure the 1910 Jail’s stability, planned repairs include: saw-cutting at the foundation level to insert stainless steel plates in the walls to block the migration of moisture up the walls, repairs and restoration to the existing walls and plaster, and providing elements to use the space for changing exhibits and to provide archive support spaces.  “It will be like a brand new building, and offer visitors the opportunity to see something new, once the work is done,” says Beeching.

The board and staff at MOSTHistory are thrilled enough money has been raised to preserve this timeless piece of history.  In its heyday, the 1910 Jail was equipped with several “modern” amenities like indoor plumbing.  The hanging tower itself was an innovation; many places in Texas had public gallows, and until the 1920s , every county in Texas was responsible for its own executions.  The 1910 Jail featured a mechanism to drop the floor in the tower, so the hanging could take place in a contained, less public space.  The 1910 Jail contained housing for the jailer, a kitchen where the jailer’s wife prepared meals for the prisoners and a system of lock-up rooms to hold prisoners.  The “Tank” was an area where multiple prisoners could be housed, while the maximum security and death cells were located near the hanging tower.

The Jail closed in 1921, when the County built a new, larger jail to the north at 12th and Loeb.  Until 1970, the community made use of the 1910 Jail in a variety of ways—as a community house, then a city hall, and to house the fire department.  In 1970, it opened as the Hidalgo County Historical Museum, growing approximately every 10 years to the 50,000 square feet it now occupies (an entire city block).  At the time of the last expansion, the museum’s name was changed to the Museum of South Texas History to better reflect the scope of the museum’s collections and exhibits.  Although the 1910 Jail will remain closed for the time being, MOSTHistory staff invites the community to enjoy its signature exhibits and ongoing programs. Museum hours are Tuesday through Saturday, 10 a.m. to 5 p.m. and Sunday, 1 p.m. to 5 p.m.

FRIENDS of the Museum enjoy free admission and other benefits, and members of the public are encouraged to become part of this group that supports the museum.  Visit www.mosthistory.org for more information.