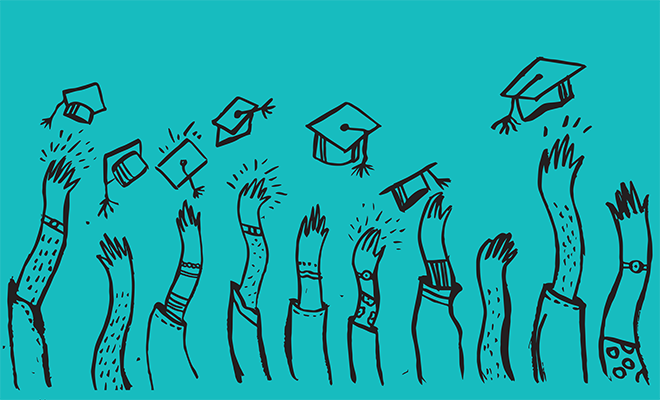 It wasn’t easy, but over 500 graduating students from the Pharr-San Juan-Alamo school district earned either certificates or associate’s degrees from South Texas College.  The program dubbed the Early College Initiative saw roughly 200 graduates with associate’s degrees in biology, engineering, math, and physics.

“It was a lot of work,” said PSJA Southwest valedictorian Luis Eduardo Guerrero.  “I didn’t have summers since the beginning, since the first summer of freshman year.  To get three associate’s degrees, I really had to take a lot of classes that would take time.”

Eventually, Guerrero graduated with four citations—including his high school diploma—with associate’s degrees in political science, criminal justice, and Spanish.  Another fellow valedictorian from PSJA Thomas Jefferson High School said it was a quite the journey to get an associate’s degree.

“We have to start off the summer before 9th grade,” Magdalena Ramirez said.  “I took the THEA before I got into the college classes.”

THEA, or the Texas Higher Education Assessment exam, is the equivalent of the ACT and SAT tests taken before college admission.  Students attending college need to meet minimum standards before entering a college or university.

“I passed it on the first try, so that was a plus.  It was challenging because it was definitely not in the 8th grade level,” Ramirez said.  “It was definitely a math that you wouldn’t be ready for, but I managed to pass it.”

“More than 50 percent of our 2014 graduates received college hours and are now well on their way to completing post-secondary education,” said Dr. Daniel King in a district news release.  “The opportunity for our students to complete a bachelor’s degree, post-graduate degree, and other professional degrees in a timely manner has been greatly enhanced with their participation in early college high school work.”

To illustrate King’s point, Guerrero plans to graduate with a degree in political science at Texas A&M in two years—after participation in the ROTC program in the Air Force at Texas A&M.

“I want to go into family practice (in the Valley),” Ramirez said.  “I really don’t have a preference where in the Valley; I never thought of the question.”

Ultimately, she would love to practice in San Juan, where she was born, raised, and went to school, but did say she was open to whatever the future holds.  And in case her plans in medicine don’t pan out, she hopes to have some concentration in education.

“It is not easy for our students to start their college career while in high school, but they have taken the opportunities provided by our school district and now have the tools they need to succeed in college and beyond,” Dr. King said.  “Just as our slogan says, our students can ‘Start College Now! Complete Early! Go Far!’”

All of PSJA ISD high schools are officially designated Early College, which provides students with up to two years of college free from tuition and books.

If you would like more information about PSJA ISD’s early college opportunities, please call the district’s College Readiness Department at 354-2044.