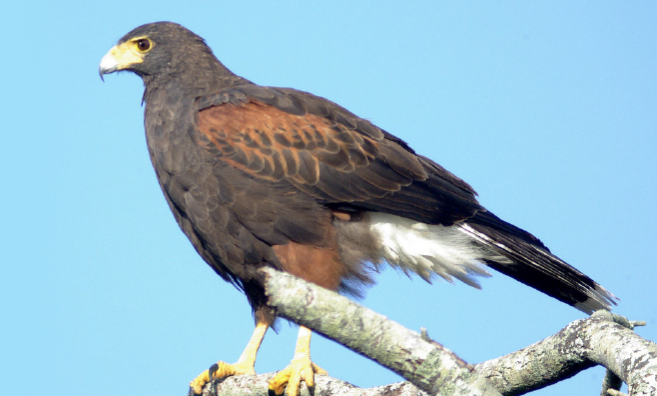 There may not be a more impressive sight than a bird of prey. Their power, elegance, and amazing flight capabilities have made them a favorite of more than just birdwatchers; they are the symbols for countries, businesses, and sports teams around the world. Think of the national bird of the United States of America — the Bald Eagle — as an example of the many mascots of sports teams across the country. Here in the Lower Rio Grande Valley, we have a vibrant (and beneficial) community of raptors that live with us.

All told, scientists and birdwatchers have documented 32 species of hawks, eagles, kites, and falcons in our four-county region. They lead diverse and interesting lives but are bound together by some common traits (though of course there are exceptions). Raptors, or birds of prey, tend to be larger in size, eat meat, have powerful beaks and talons, and strong flight. They are also renowned for their great eyesight — “eyes of a hawk” is a common phrase for a reason.

One of the greatest benefits of having raptors around — aside from getting to enjoy their beauty and character — is as part of nature’s pest control crew. Worried about diseases spread by rats and mice? There are many hawks and falcons that help control rodent populations and in style! White-tailed Kites are graceful denizens of grasslands (including fields in our towns and cities) known for their remarkable ability to hover perfectly in place, then drop stealthily on their unsuspecting prey. American Kestrels, our smallest falcon, use their ultraviolet vision to see the paths mice make through the grass. As odd as it sounds, mouse urine and feces absorb UV light, leaving dark markers for the kestrel to follow in its hunt.

While some of our raptors are mostly found in habitats without many people — Hook-billed Kites are secretive snail-eaters of dense thorn forests — many of them can be seen in urban and agricultural settings. If you have a bird feeder, you have likely seen a Cooper’s Hawk or Sharp-shinned Hawk dive in and grab a dove — or at least scare all the birds away momentarily. Peregrine Falcons are another species that frequent our towns and cities, often perching on water towers and on tall buildings. One time I was stopped at an intersection with a water tower and happened to notice feathers falling outside my truck window. Sure enough, I looked up and saw a Peregrine Falcon feasting on a Rock Pigeon.

The magic and majesty of birds of prey are readily seen. The next time you are out and about, keep an eye on the sky (safely, of course). You might see a hunting harrier, or a soaring Red-tailed Hawk, or the rich chocolate brown of Harris’s Hawk highlighted by a South Texas sunset. I hope you will see them, but am positive that the sharp eyes of a hawk have seen you.

Help keep our birds of prey safe! Be cautious about using pesticides; many of the pests they target are things raptors eat. Know your local laws; it’s illegal to shoot a bird of prey. Conserve habitats; one of the leading causes of raptor declines is the loss of the spaces they need. For more information about birds of prey, contact Quinta Mazatlan.

What’s your favorite bird of prey and why? #JoinTheConversation at facebook.com/rgvisionmagazine.