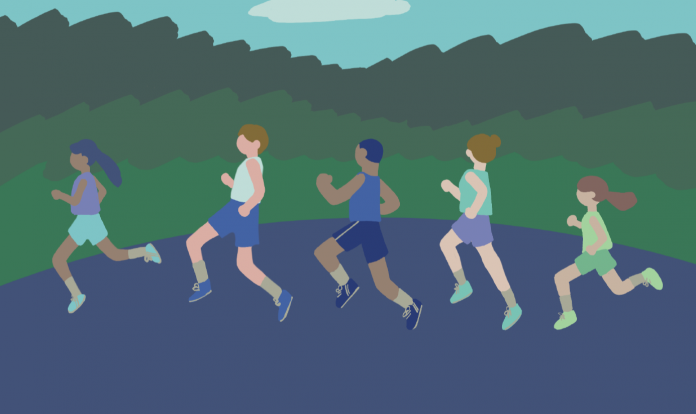 As much of an annual tradition as singing “Auld Lang Syne,” New Year’s resolutions drive many to achieve personal goals — often in the realm of increased exercise and weight loss.

One way to reach those future fitness goals is running 5K races. Running has become a personal hobby for many based on the physical and mental benefits it can offer.

At the same time, competition and the goal of receiving a medal encourages people to want to run faster and eventually grow as a runner.

Diana Cantú, who is originally from McAllen, said she does races because obtaining a medal is rewarding for her for multiple reasons.

“Running allows me to clear my mind and feel better about my personal health,” she said. “A race allows you to meet people within your community or elsewhere and see firsthand the support spectators are willing to give.”

Cantú signed up for a 5K scheduled to be held Jan. 1 and a half-marathon scheduled for Jan. 16. She is doing both for her personal health and is using the events as motivation to run more. It is now a New Year’s resolution for her to be able to get better at running.

“I felt my best when constantly running and hope to get back to that routine,” she said. “I felt much better, my mental health improved, and it allowed me to let go of thoughts I had, which would only worry me.”

In a similar fashion, Vianney Mena decided to start racing in 5Ks just for fun until she placed in her age group. Now, she feels motivated to attend running events to get better at her pace.

“You really get inspired by the people you see in those races,” Mena said. “There are people of all types of fitness levels — you see moms, families, groups of friends, even people with their dogs. It really is about having fun. Plus medals can be very addictive to win.”

This year, Mena is only participating in one race. She is recovering from an injury and wants to go easy on her body. She said usually she does three to four 5Ks a year.

“I started running as my main workout about three years ago,” Mena said. “I was in a very dark place in my life where I felt that running was the only thing that made me feel accomplished.”

She describes running as a solo sport, meaning that nothing else is needed but your own body to keep going. For Mena, running has become a way to push herself to her own limits, which is something she can work on every year.

“It’s fun to push yourself once in a while and know that you achieved something by yourself,” Mena said. “For me, it’s placing in my age group. For others, it might be being active or completing a 5K for the first time. I always encourage people to sign up because regardless of your fitness level, the motivation you get while being in a 5K is so rewarding. People are cheering you on, and it’s a fun activity to do.”

While races encourage many to get healthy, it can also raise awareness or provide help for specific purposes.

Over the course of a decade, Monica Lopez of Harlingen ran 5Ks with her husband. He died 16 months ago from colon cancer, which prompted her to organize a 5K in his honor called Miles for Manny. This way, money raised will be going toward people fighting cancer as well.

“That was something we enjoyed doing all the time, running 5Ks for whatever cause it was or to help people raise money for one thing or another,” Lopez said. “Also, it made us feel good and kept us in shape.”

Miles for Manny helps continue those memories while contributing to a good cause.

“Knowing how much he enjoyed it and how we both love to give back to the community, to people and to our friends that helped us so much when we were going through cancer, I wanted to do that same thing for someone else,” Lopez said. “He would have really liked this.”