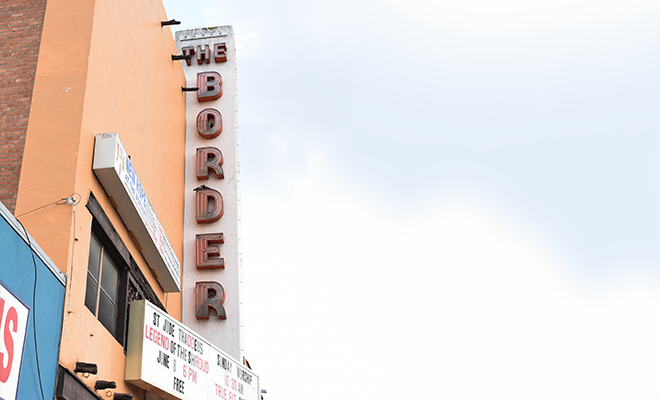 Sprinkled from Starr County to Cameron County are charismatic historical landmarks that inspire nostalgia and carry prolific cultural roots. Stories of strength and character are still nestled between the walls, and amazement still abounds in visitors who immerse themselves in the atmosphere of generations past. These gems, long forgotten by some, are structures that make the Rio Grande Valley awesome, and require a visit. 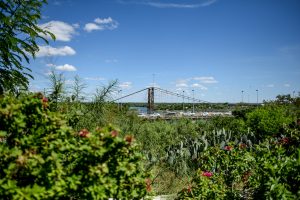 cted in 1846 as the first commercial property in Roma. The building, which still features its original frame, started as a general store. Eight generations later, it is still family owned. This beautifully renovated and colorful building sits in the middle of Roma’s historical plaza, and is only a few feet away from the Rio Grande. The prime view from the property frames the bridge that connects the United States and Mexico. It’s also what makes Casa Del Rio beloved in the community and brings in visitors and photographers.

Noel Benavides, owner of Casa Del Rio, chuckled with pride as he described his dad offering unofficial historical tours to visitors when he has time — purely because he finds gratification in talking about the city he loves. 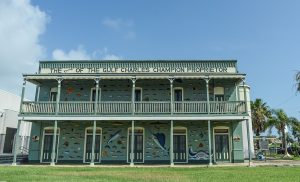 This historical gem is currently battling for rights against the government acquiring land for surveillance purposes. Using the property for any government purpose, including building a border wall, would destroy a landmark that has stood for over 150 years.

“I know that the media portrays our area like ground zero for what’s going on with immigration, but it’s really a tranquil and beautiful place,” Benavides said. “You can sit down and take in the beauty of nature and the history around it. Roma has really good businesses and I feel that if people would come and visit and see what we have to offer, they would be very impressed.”

Originally built in 1942, the Border Theater was the fifth cinema to be constructed by Valley theater pioneers. Still functioning as what it was originally built for, owner Joseph Ramientos says his favorite thing about the movie theater is hearing guests reminiscing about the times they first visited the theater. When they visit, they say, “‘Wow, the last time I was here was when I was a kid.’ They’ll just start telling about the good ol’ days,” Ramientos said. 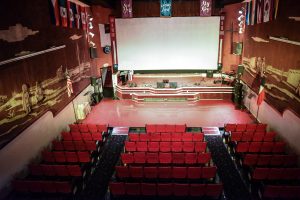 eater also operates as a center for group meetings and is available for rental, including hosting independent movie premieres. It currently shows free movies to the public. “We love doing this for free,” Ramientos said. “Unfortunately, we can’t go back to old time prices. Popcorn before was 25 cents!” Winter Texans use it every Tuesday from October to April for their popular Big Band Jam event.

Ramientos suggested that visitors also visit the Mission Historical Museum, which conducts tours at the theater to raise awareness of the original murals inside the building. Tourists are also impressed with the detailed paintings of the ranch lands of South Texas that are painted on the original beams in the theater’s foyer.

Set atop a grassy hilltop is the only lighthouse constructed along the Texas Coast that is still open to the public. Originally built in 1852, the lighthouse aided the heavy maritime traffic through Brazos Santiago Pass to Port Isabel — at the time called Point Isabel. The lighthouse played a big role in making sure that ships coming from the northern parts of the Texas coast and Mexico could find their way into the bay safely. The lighthouse was finally decommissioned in 1905, and later renovated in 1970 to better accommodate visitors. Still standing strong in its original 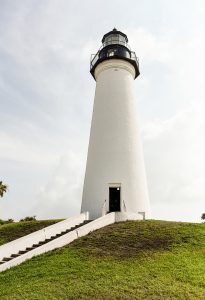 structure, the lighthouse continues to be a staple of tourism for people all over Texas.  With a perch 50 feet above the ground, it offers spectacular views to every visitor.

“It’s a really nice 360-degree view in a 16-mile range,” said Valerie Bates, marketing director for the City of Port Isabel. “You can see South Padre Island, the Laguna Madre Bay, Gulf of Mexico, and the Brownsville ship channel — the view’s spectacular.”

Still hosting many local events, the lighthouse is currently holding a free summer movie night at 9:30 p.m. every Friday in June and July. Guests are also encouraged to visit the Charles Champion Building while in town. Built in 1899 and known for its unique and colorful fish murals, it currently operates as a museum and is also one of the town’s prized historical landmarks.

“We are hurricane prone, unfortunately, so anything of significant age is very valuable to us,” Bates said about the town’s treasured historical landmarks. “We’ve lost buildings over the decades, so these buildings are a real treasure to us — we’re a little town with lots to say.”

Having fun while exploring the antiquities of generations past has never made for a better day adventure in the Valley.