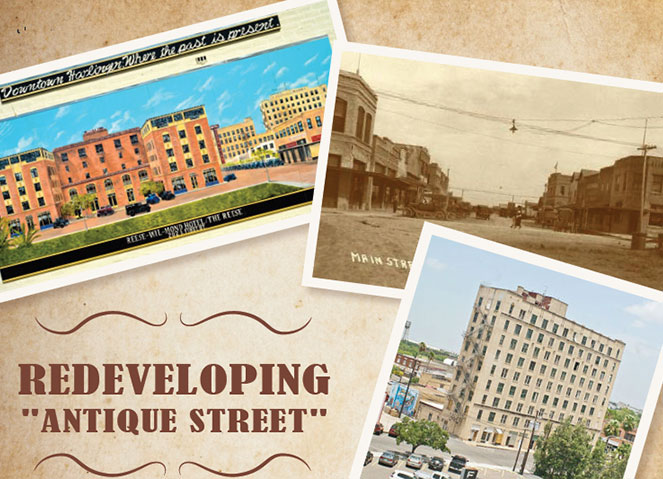 A two-story brick building on the corner of Jackson and Commerce streets sits on land that has been at the center of business activity in downtown Harlingen since the early 1900s.

The site of a barber shop owned by Harlingen pioneer Mack Crenshaw, the property changed hands in 1917 and gave rise to the building that housed the Planters State Bank, followed by Valley State Bank, and, later, from 1927 to 1965, housed the Cameron County Irrigation District.

One of many buildings that date back to Harlingen’s heyday as a boom town in the 1920s, the structure is now home to Downtown Harlingen, a public improvement district dedicated to the redevelopment of the central business district.

Last summer, following the decade-long tenure of Cheryl LaBerge as the district’s director, Edward Meza took the reins to lead the coalition of businesses and property owners in the continuing transformation of the historical heart of the city.

Meza served 11 years as director of historical preservation for Port Isabel before an eight-year stint as city manager there. He then spent several years consulting with museums until he was hired as the Downtown Harlingen director.

“Over the years I would visit downtown Harlingen on the weekends,” he said. “I was a customer here first.”

Now he looks forward to helping build on the city’s heritage and continuing the work of revitalization that progressed under the stewardship of LaBerge and others involved with Downtown Harlingen.

“It’s an attraction,” Meza said about the city’s center. “Not only the buildings that make it unique but it’s the people. The business owners are dedicated to making it a destination attraction.

“There has been an emergence of new businesses realizing how unique and wonderful downtown Harlingen is.”

The arrival of Southern Pacific Railroad in Harlingen in 1904 kick-started an economic boom that by the 1920s had transformed the city into an economic powerhouse of the Rio Grande Valley. Land was cheap and agriculture was king, drawing large numbers of farmers, ranchers, and entrepreneurs.

“They brought them down by the trainload,” said downtown property owner Bill DeBrooke, a board member with Downtown Harlingen. “Everybody was smelling blood in the water — or money in the pocket. This was the center of commerce in the Valley.”

Economic prosperity brought development in the form of first-class hotels to service the railroad passengers in a thriving retail- and service-oriented downtown.

Meza said Harlingen attracted wealthy developers who introduced influences from around the country.

Some of those buildings are long gone. Others, like the Baxter Building, are in various states of disrepair. Some have been renovated, like the old Reese Hotel, and others are in the process of being redone.

“It’s amazing to look at old photographs and the changes, what’s survived over the years and what hasn’t,” Meza said.

DeBrooke, who came to the Valley with experience in renovating old buildings in Ann Arbor, Michigan, bought his first downtown building in 1990 and has become a major property owner and a leading proponent of the redevelopment effort.

Like so many downtowns across America, central Harlingen suffered from economic changes that came with the development of Sun Valley Mall in the early 1960s and Valle Vista Mall in the early 1980s. The closing of Harlingen Air Force Base in 1962 struck a blow that impacted the entire city.

Economic diversification throughout the city helped bring some stabilization but downtown continued to struggle.

DeBrooke said there are fewer buildings in downtown Harlingen today than there were in the 1920s.

With the formation of Downtown Harlingen, the old began to come together with the new to begin a journey of revitalization.

Established in 1989, the downtown redevelopment program is a public-private partnership. In addition to some city funding, downtown property owners have agreed to tax themselves through an annual assessment to generate revenue for improvements including landscaping, signage, promotions, and storefront enhancements, Meza said.

The first signs of a rebound came about in the 1990s with the attraction of antique stores to Jackson Street.

“Jackson Street became known for antiques,” Meza said. “It all started with the antique stores. Harlingen is the only city in the Valley with a street dedicated to antiques.”

In more recent years the business district has diversified with new restaurants, art galleries, music venues, and retail outlets joining some of the long-standing businesses.

“Downtown is the best it’s been since the ’60s,” DeBrooke said.

Meza said that buildings in the downtown district have reached 90 percent occupancy, even though it may not appear that way. Some of the storefronts that look vacant are leased or owned by entrepreneurs doing renovations needed to open their doors for business.

From the monthly Jackson Street Market Days to special events like the annual Christmas Parade, Downtown Harlingen promotes a robust calendar of events to attract visitors and make the district a “place where the community celebrates,” Meza said.

“The Halloween celebration attracted 5,000 people and merchants reported increased sales the following two weeks,” he said. “It was wonderful for people who had not been downtown before.”

While more and more people are shopping downtown, DeBrooke said a next step is to attract residents to make the district their home.

“That’s our next hurdle, getting residential downtown,” he said. A handful of people have successfully renovated second-story lofts into living spaces, but strict building code requirements make it an expensive project to complete.

But Meza is optimistic about downtown’s future, saying the improvement district has attracted entrepreneurs dedicated to making it work.

“It just needs a group of people to work together,” Meza said. “It takes a team to be successful, that they share the same vision. I’m fortunate to have that type of group to work with.”