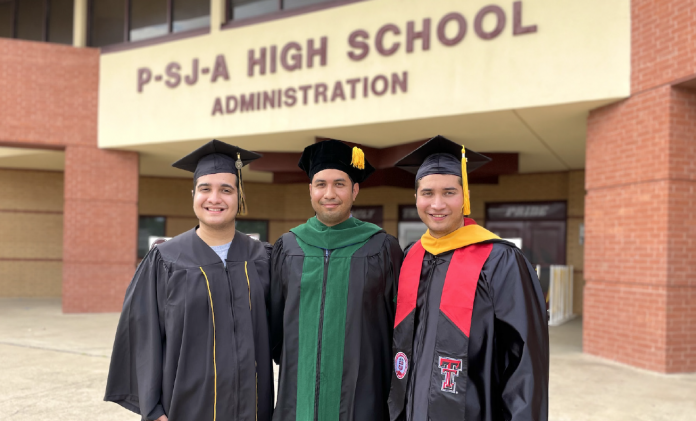 According to their mother, Lorena Guzman, she is proud to see them continue to have pride in their roots as they succeed.

“We are so proud of our children for their efforts and dedication in making their dreams a reality,” Guzman said. “The college classes they were able to take at PSJA ISD were part of the foundation that inspired them to strive more for their future and continue their studies. Thank you to all of their PSJA ISD teachers since elementary to high school. Even now, they still get in touch with their counselors. They are always there to support them or answer their questions about college.”

While at PSJA ISD, Dr. Jesus Guzman Jr. earned an associate’s degree of science in interdisciplinary studies from South Texas College. He then earned a Bachelor of Science in molecular & cell biology from Texas A&M University in 2014 and a Master of Science in veterinary pharmacology & physiology from Texas A&M University in 2016. Most recently, the 28-year-old graduated with a doctorate in osteopathic medicine from Burrell College of Osteopathic Medicine in New Mexico. He will be starting a residency this fall in family medicine at the University of New Mexico School of Medicine.

“To me, being part of PSJA ISD means I had the privilege of growing up in a tight-knit community, bicultural and bilingual,” said Dr. Guzman Jr. “All those experiences helped shape me into who I am today.” 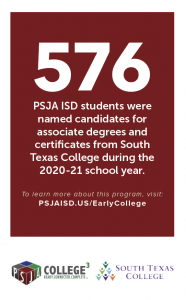 Continuing in his brothers’ footsteps, Juan Guzman graduated from PSJA ISD in 2017 with an associate’s degree in mathematics from STC. He recently graduated with a Bachelor of Science in chemical & biomolecular engineering and a Bachelor of Arts in history from Johns Hopkins University. He plans to pursue a Master of Science in engineering management at Johns Hopkins University.

“PSJA ISD opened the doors for me to pursue higher education and gave me the skills to succeed four years later and beyond,” the 21-year-old said.

Through partnerships with South Texas College and other higher education institutions, more than 3,500 PSJA ISD high school students are enrolled in college courses each semester through the district’s nationally recognized Early College Program. College courses continued virtually during the 2020-21 school year despite the pandemic.

Due to their accomplishments, the brothers wanted to return to visit their high school during a celebratory trip to the Rio Grande Valley for their graduations. They, like their parents, credit part of their educational successes to the start and opportunities they had at PSJA ISD.

“To my PSJA family and future graduates, keep on working hard, aim high, and remember your roots,” Alan Guzman said. “Once a Bear, always a Bear!”