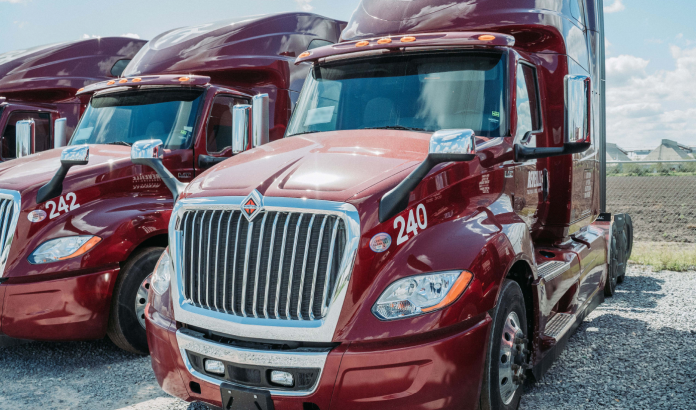 Reveille sets the standard. Established in Harlingen by David O’Brien with just two trucks in 1995, Reveille Trucking Inc. has grown over the years into an international 100-plus truck operation with an on-time performance record of 98.5%

Though the company experienced steady growth in its first decade, President Tim O’Brien, David’s son, helped accelerate the pace when he joined in 2008. Over this period, Reveille expanded from 27 trucks to 112.

“Our success comes down to our team,” Tim said. “It’s an overall effort by everybody to help.”

From drivers to those in accounting, dispatch, or sales, in the family-run business, each employee is treated as such. According to Tim, Reveille has employees dating back to its start; this is due to the company’s principles, valuing its employees and offering competitive benefits.

Reveille transports across the continental U.S, Canada, and — through its carrier partners — into Mexico.

“While we’re in an industry that operates 24/7, we understand that everyone needs time to be at home with their families,” Tim said. “Even with our drivers, we make sure they’re home two days a week. They don’t bounce around the country; they go and come right back.”

Similarly, they have clients who have been around just as long. A few from throughout the years include Pentair, BBB Industries, Stanley Black & Decker, Century Aluminum, and LG.

“They know to expect dependability and quality service,” he said. “I have the best staff there is, without a doubt. The Reveille team is top-notch.”

This is ensured by investing in its employees through orientation and training initiatives and upholding strict operator qualification requirements.

As an essential industry, Reveille’s transportations did not halt with the onset of the pandemic. Though an unprecedented challenge that temporarily led business to slow down, Tim said by remaining united, they were able to weather the worst of it — with safety remaining the top priority.

He ensured measures were put in place to minimize the risk of people getting sick, which proved successful.

“I was very impressed with my team and everyone pulling together to do the best they could during a certain time,” he said. “Then, fortunately, the

pace picked up, and we were really able to take advantage of the booming economy.”

Another value Reveille holds is environmental responsibility. As a SmartWay Transport Partner — a program of the U.S. Environmental Protection Agency — Reveille has updated its fleet to lower emission vehicles with above average miles per gallon to minimize its carbon footprint.

If in need of reliable transportation, Reveille is committed to saving its customers time and money through its efficient, quality systems backed by more than 22 years of experience.

Tim adds they are always looking for new people to join the ever-growing operation. With several trucks on order for the year, they are especially in need of drivers to fill the seats.