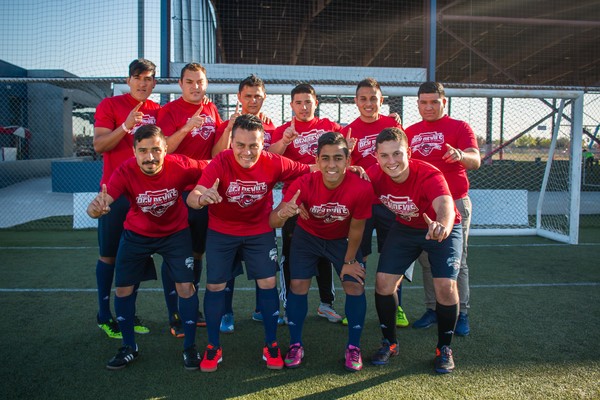 Playing the right game on the right field made all the difference in the world for local indoor 5v5 soccer team, RGV Devils. The five members play on several leagues at Plaza Sports Center, which recently hosted a 5v5 tournament that opened the door for them to compete at the national level.  They moved up the ranks and crossed state lines to claim honor and glory for South Texas, which can now  proudly call itself the home of the top ranked indoor soccer team in the country.

RGV Devils play pickup games at Plaza Sports Center, which is always bringing the latest in soccer trends, like bubble soccer, to the Valley. The sports center hosted an anniversary tournament in December, inviting local, non-professional teams to play  5-a-side soccer (a smaller version of the world’s greatest game) on their covered turf fields. 5v5 allows more individual ball time and continuous play and after a surge in popularity in Europe that is transferring to the U.S., 5v5 soccer is now a professional sport. Amateur leagues are starting to be more common.

The Plaza tournament was intended to propel the best local team to national competition to represent the talent that resides in the Rio Grande Valley. With their victory in December, the RGV Devils won entry into the World Soccer 5s tournament in Las Vegas, Nevada, and the chance to witness the Global Legends game concurrently going on at Sam Boyd Stadium. “Our guys got to see professionals playing from all over the world playing in a friendly game,” said Alma Caso, CEO of Plaza Sports Center.  “I’m very proud that they’re from the Valley and that we were able to send them because they won one of our tournaments.”

Once there, amid the arid Las Vegas heat and wind, the Devils were in for a wild ride. The turf laid down over concrete as the playing surface made for the first difficulty, as did the tournament’s choice to use typical #5 soccer balls instead of #4 futsal balls, which have 30 percent less bounce. As such, the players had to contend with erratic bounces and difficult moves over a shifting turf. It was not ideal, but the RGV Devils gave it their all. The team played wonderfully the first day of the tournament, according to Caso and Quiroz, with many of their opponents complimenting their technique and demonstrating surprise at their skill.

Though the competition was stiff, with players from all over the world making up 120 American teams, RGV Devils won their first game and tied in the second. “The RGV Devils team has been playing together and training since last October,” said Jorge Quiroz, who happens to play on the team as well as serve as coach. Their training paid off. They went home excited for the next day’s games, scheduled to begin at 11.

However, the next day they were alerted last-minute (via email) of a time change and were almost disqualified when they missed the match after not seeing the notice. The team had come too far to let their dreams go due to a miscommunication like this. They fought against the unfair situation with the support of Plaza Sports Center, and eventually they were allowed to keep playing. “They realized it was wrong on their part,” said Caso. “So the RGV Devils went on to the next round, won the game, and then they went on to the final!”

In the final round against NY Ecuador FC, they tied 2-2. They went to penalties and the Devils lost by one penalty shot. It seemed like it was second place for the RGV Devils. Though they wanted the first place win, they were still excited to have competed against the top non-professional teams in the nation — or so they thought.  It was at that point discovered that some of the players on the opposing team were not amateurs, as required by the league. As such, the team was disqualified and first place went to the RGV Devils. Caso says she and the rest of the Plaza Sports Center team are very proud of RGV Devil’s great accomplishment in Las Vegas. “They showed great teamwork, fought for what was right (for them to play) and their amazing soccer skills got them the championship,” she says.
“We’re very proud because it was a difficult path and we had stiff competition,” agrees Quiroz.“We played against all the hardest teams.” Coach Quiroz wants to thank everyone who supported the team, following their games and cheering them on. Recently, the Devils participated  in an unrelated, indoor semi-professional league comprising of Texas, Colorado and Arizona. They went to the finals in March and won first place there, as well! “They are winning every tournament,” says Caso proudly.