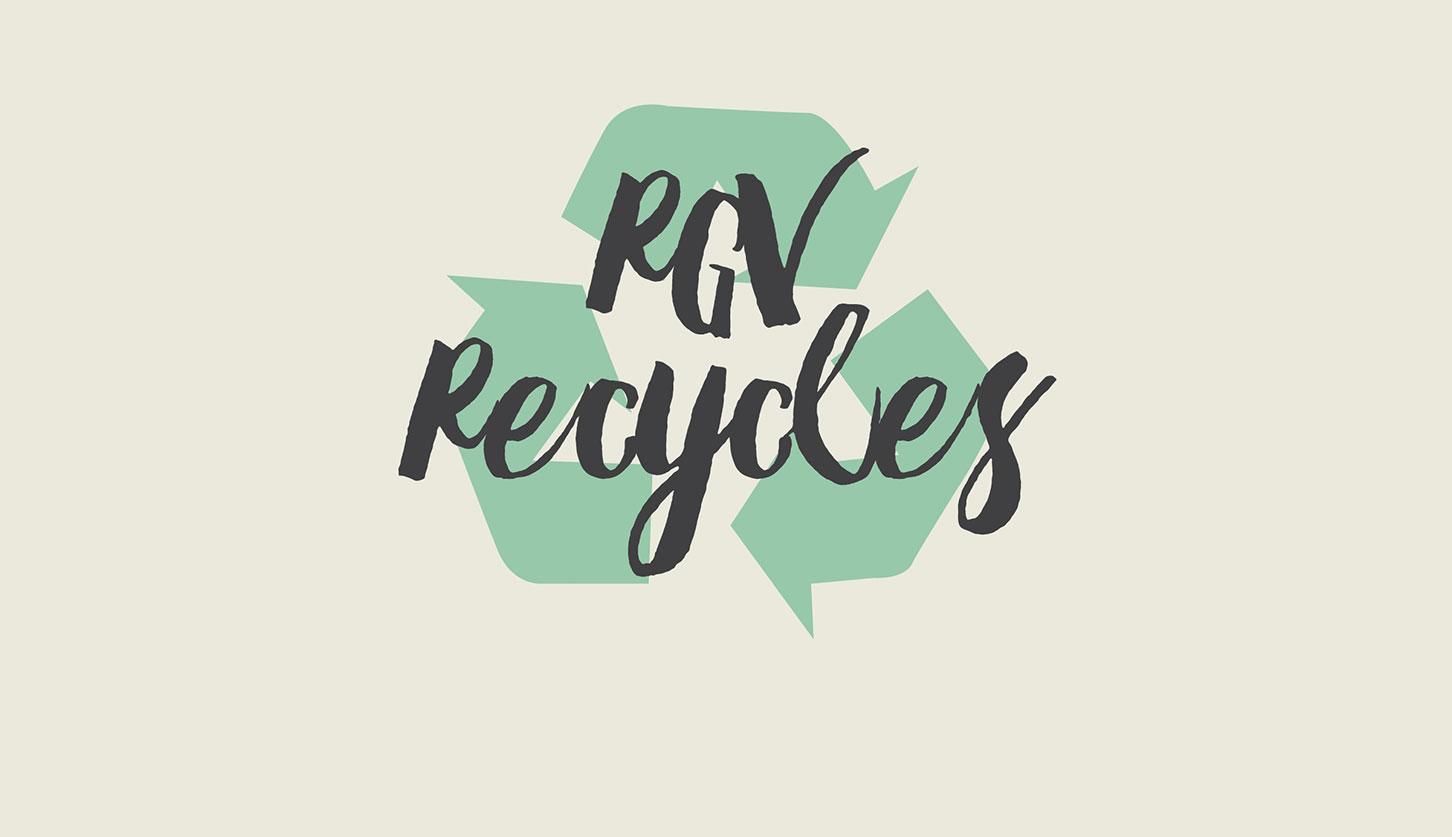 When you’re given a task as important as saving the world, it’s natural to get a little intimidated. While big concepts like climate change can overwhelm you, recycling is a different story.

“It’s very easy, starting at home, to get a box to start with one item, maybe, one or two items, and just put them in the box and bring them on down to the recycling center,” said John Avilez, recycling coordinator for Harlingen. The Harlingen center processes 2 million pounds of recyclables per year, Avilez said.

Starting small and starting simple is key when embarking on a journey of making your life a bit greener, especially with Earth Day on April 22. This year’s campaign encompasses environmental and climate literacy, according to the website for the holiday. While doing something to impact climate change might seem like a tall order, committing to a recycling program for your household is something more immediate that will have a lasting effect in the Rio Grande Valley and beyond.

A number of cities across the Valley have either dedicated recycling centers or drop-off sites for collecting recyclable material. Many of them receive funding for enhancing these projects through the Lower Rio Grande Valley Development Council. The council also works to educate the entire community about recycling and good environmental practices through its website and outreach programs.

“Our environment is the future of all of our kids, and that’s why we gear our outreach and education toward the schools,” said Marcie Oviedo, director of regional planning for the LRGVDC. “Especially the little ones. They’re so eager to recycle. They’re the ones that push the parents into recycling.”

Many of the cities across the Valley have recycling centers or drop-off points, and the vast majority of them accept recyclables no matter what city you’re from. Each center accepts different materials — and some materials, like Christmas trees and phone books, are taken only at specific times of the year — so it’s best to call or check the website of the center nearest you before you go. For most centers, expect to be able to recycle newspaper, office paper, cardboard, plastic bottles and bags, books and magazines, and aluminum and tin cans. Some centers offer recycling for used motor oil, batteries, ink cartridges, glass, and e-waste — old cellphones, computers, and other electronics.

“A lot of people are afraid of identity theft, so if they bring in their computers, the company we work with actually destroys the hard drive, so you won’t have to worry about it getting sold at the flea market the next weekend,” Treviño said of the McAllen center’s program to accept e-waste.

Having a greener mindset can also take the concept of recycling to other levels of practice.

“(It’s) not only the items that we take in at the recycling center,” Treviño said. “It can be planting a tree, or composting. It’s another form of recycling.”

McAllen composts brush from residents and city greenways and re-sells it. It keeps the bulky clippings out of the landfill while repurposing the unwanted greenery into something more valuable.

That’s another concept essential to living greener — the “reuse” portion of reduce, reuse, and recycle.

“The most effective way to reduce waste is to not create it in the first place,” reads the website for the U.S. Environmental Protection Agency. Buy more clothing at secondhand shops, for example. It’s usually cheaper and of the same quality as purchasing new. Look into different ways you can donate items you no longer need. You can drop off everything from clothing to furniture and decor to organizations like The Salvation Army and Goodwill — and get a tax write-off for doing it. The EPA also suggests borrowing or renting items that might not be used very often, such as tools or party decorations.

And if it’s just not possible to get your materials to a recycling center here in the Valley, there are a number of retailers that offer recycling programs. You can turn in old cellphones at Best Buy and Target, for example, and plastic bags at Walmart and H-E-B, giving people even more opportunities to start recycling.

“The interest and the commitment is there, we just need to make more people aware of the situation and do it,” Oviedo said.

Learn more about recycling in the Rio Grande Valley at http://www.lrgvdc.org/downloads/solid-waste/FinalRecyclingGuide01-16-2017.pdf. 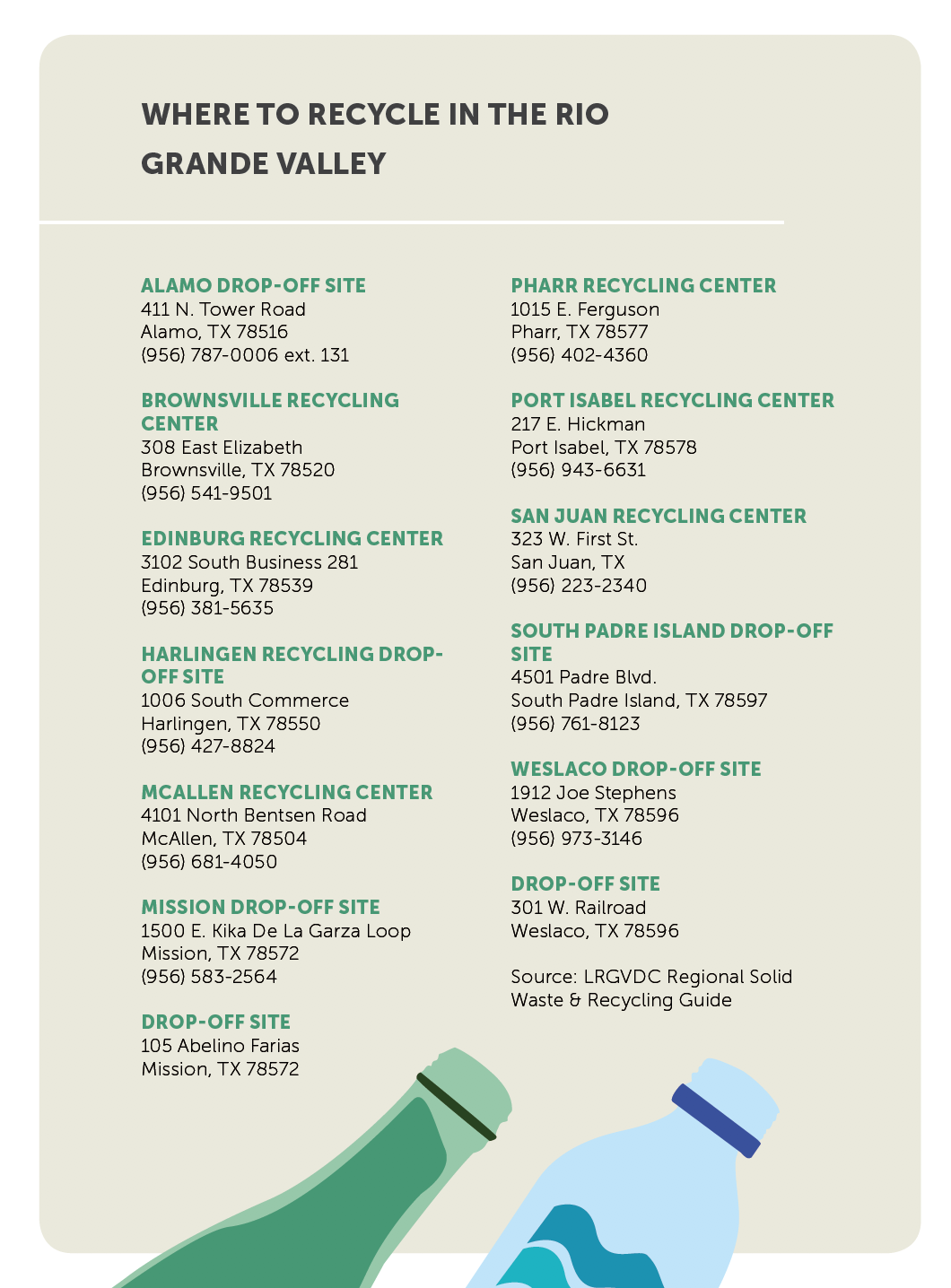