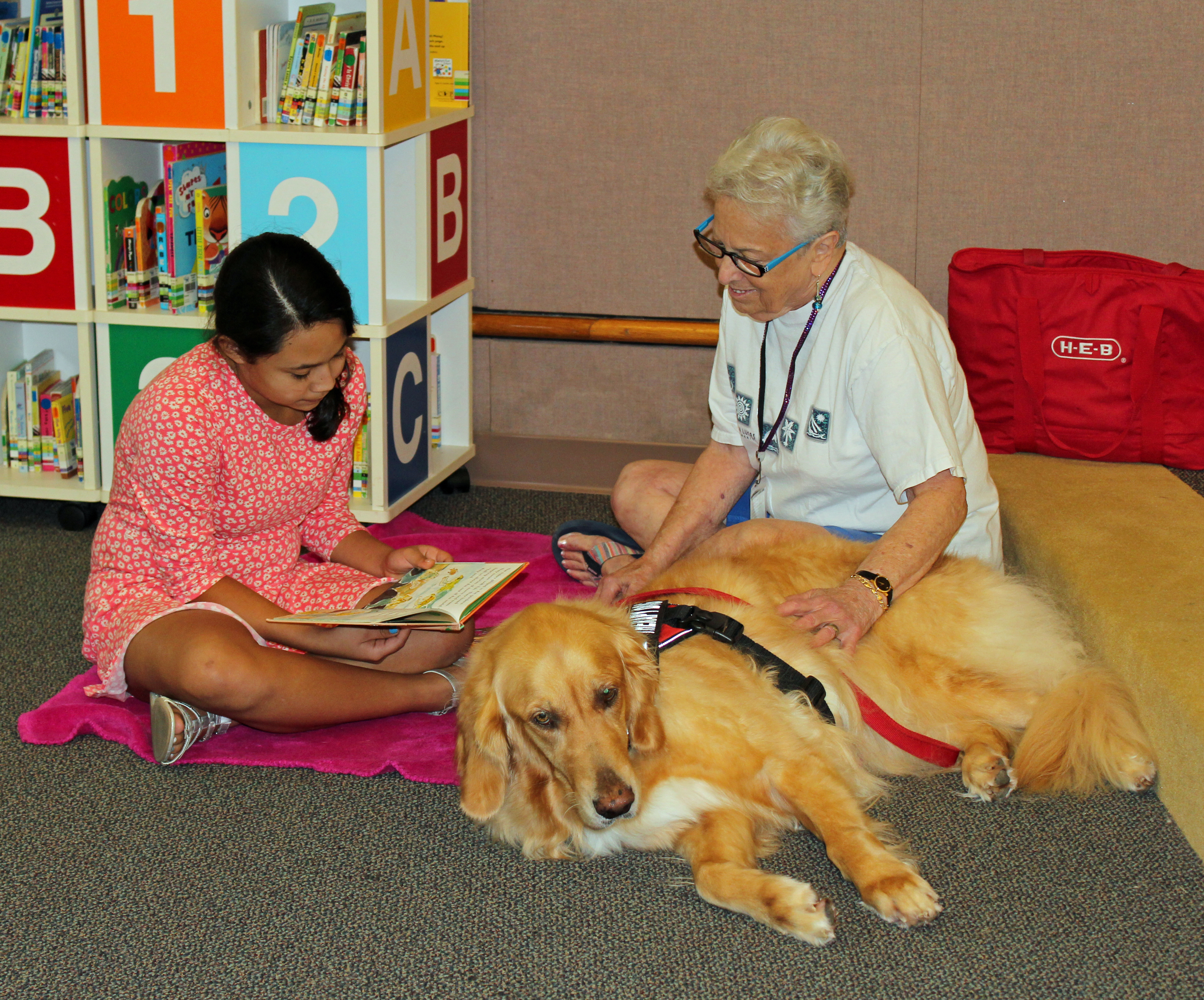 The 10-year-old girl waited patiently with book in hand.

When her turn came, Morticia Castro sat on the library floor next to Sobrina Luna, an Irish wolfhound.

The giant breed nuzzled Morticia as she petted the dog’s head, and then she began to read out loud to Sobrina.

Sobrina is one of several therapy pets that are the stars of the Paws to Read program at the Harlingen Public Library every Sunday from 3-4 p.m. Two or three therapy pet teams participate each week.

The children’s literacy program strives to create a non-threatening, non-judgmental atmosphere where youngsters, who are often insecure about reading out loud, can work on their reading skills and self-confidence. The dogs are good listeners and do not correct or criticize. The pet handlers only help in a positive way when a child is struggling with a word.

Paws to Read started in December 2011 with Sobrina’s Irish wolfhound uncle, Ocho, and is now the longest running children’s program at the library.

In 2014 Paws to Read served 631 readers, an increase of 15 percent over the previous year. In 2015 the pace is on target to reach even more young people.

“When we started volunteering with Ocho, we quickly realized how few therapy pet teams there were in the Valley, and how many opportunities were out there,” said Brookbank, president of RGV Therapy Pets.

Brookbank and Cox are therapy pet handlers registered with their dogs through Pet Partners, a national organization that promotes “positive human-animal interactions (that) improve the physical, emotional and psychological lives” of individuals. 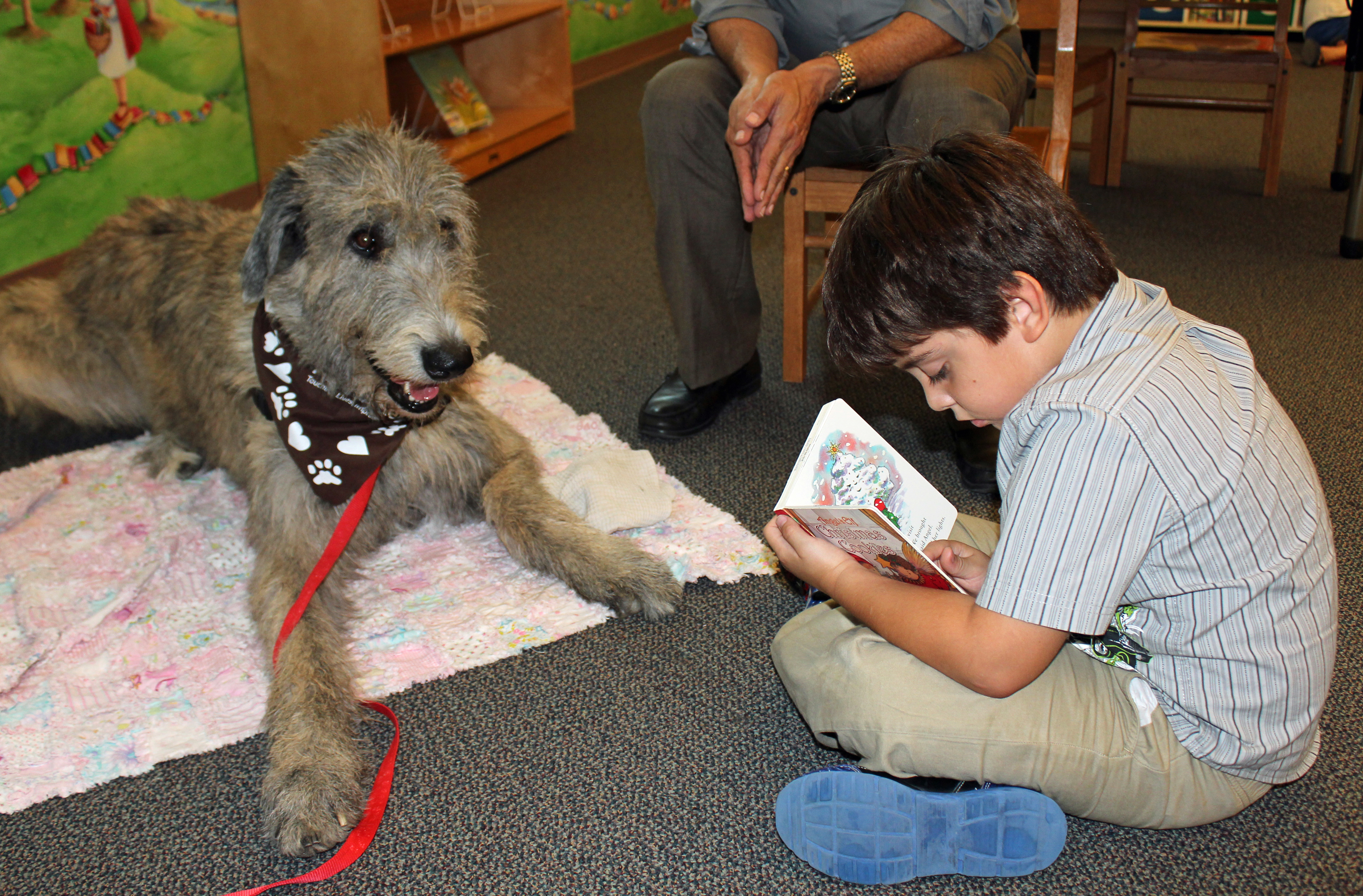 The idea for RGV Therapy Pets was conceived in the fall of 2013, about the same time that Brookbank and Cox were trained and licensed as therapy pet team evaluators by Pet Partners. They are the only two evaluators in Texas south of Corpus Christi and have successfully evaluated more than 20 therapy pet teams.

“Therapy pet work is a meaningful and rewarding way to give back to the community,” Brookbank said. “We want to help others get involved in helping people with their pets.”

Ginny Chester of Harlingen and her golden Labrador Jordan are among the newer teams volunteering at the Paws to Read program.

“I love being with the kids,” Chester said. “The program gives them confidence in reading out loud. You can see it because when they come back they are doing better and are more confident.”

RGV Therapy Pets holds evaluations once a quarter, usually in Harlingen. The evaluations follow a format designed by Pet Partners and involve a series of exercises that test the human and the animal as a team.

Some basic obedience is required, but most of the evaluation exercises simulate situations and distractions that therapy pet teams might encounter on an actual visit. In one exercise, volunteers role-play as hospital patients in wheelchairs and using other medical equipment. In another, the team is crowded by individuals who may be very loud and attempt to inappropriately interact with the animal.

“The evaluation is more than just a test of the dog,” Brookbank said. “We are evaluating the person and the dog as a team. It’s just as much about the handler being in control of the dog and being an advocate for the dog as it is about the dog’s behavior. And we look for clues that the team will be interactive with people they visit in a positive and supportive way.”

Once a team passes the evaluation and Pet Partners approves their registration the human-animal partners are free to venture out in the community to volunteer on visits of their choice. RGV Therapy Pets will try to help teams find places to visit, but ultimately it is a decision for the team.

“It’s important to find the right environment for each team,” Brookbank said. “Some dogs do really well in a hospital setting and others don’t. It really depends on the handlers’ interests and where the dogs are the most comfortable.” 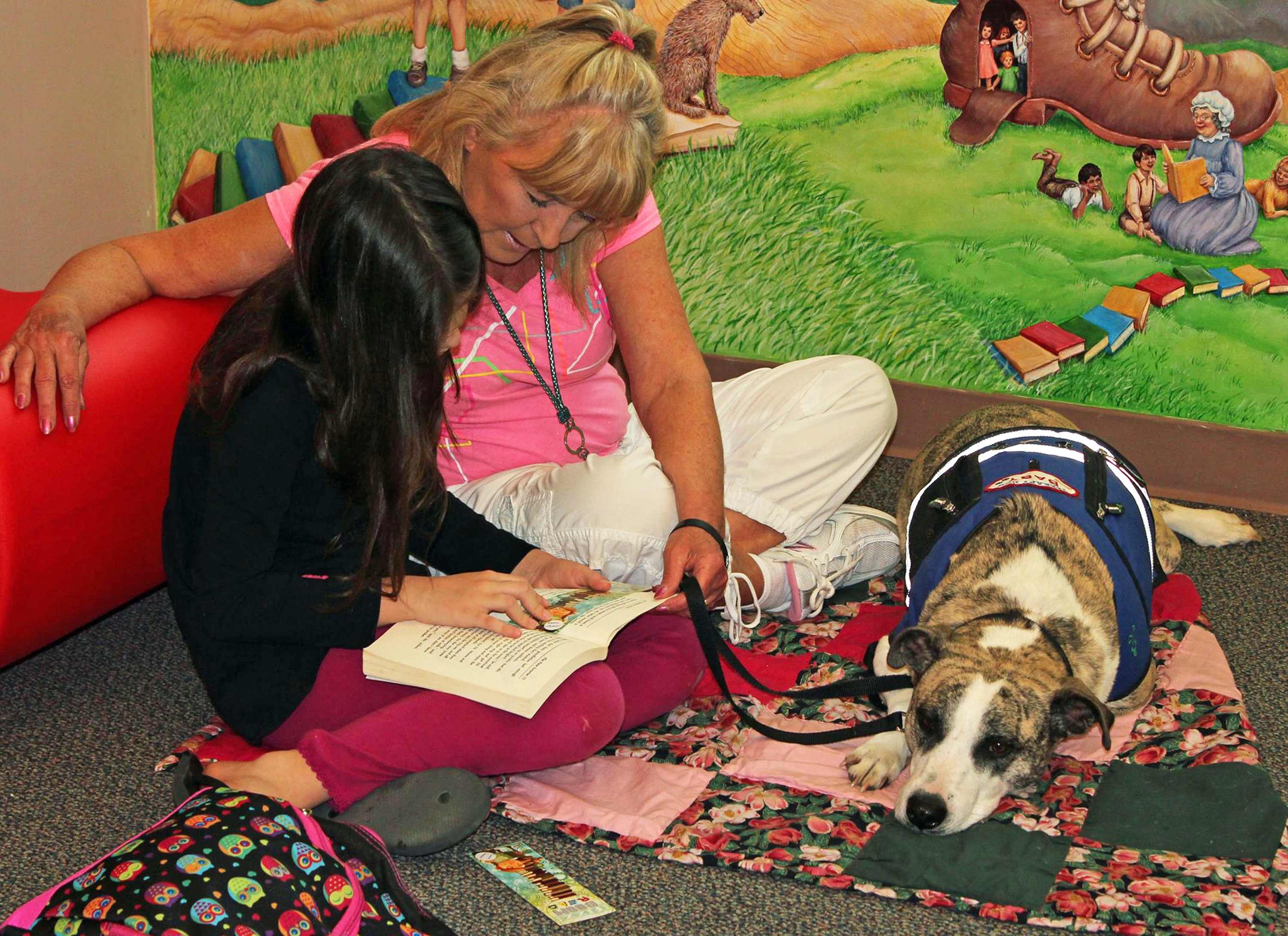 “In the memory group the residents may be sitting quietly alone in their own world of thoughts and as Baby lays her head in their lap or sits beside them, they come alive and reach down with big smiles and pet her or call her by the name of one of their past pets,” Gunnels said.

Gunnels is an enthusiastic supporter of therapy pet volunteer work. Initially she was registered with Baby and Ozzie, another mixed breed rescue, and alternated between the two dogs on visits.

Ozzie died last year but the loss did not deter Gunnels from her volunteer therapy work with Baby, and she is now training Phoenix Rose, a three-legged rescue dog, to join the ranks of therapy pets contributing to quality of life in the Valley.

Not only do therapy pets have a lasting impact in individuals they visit, but they can touch the community at large.

Because he was such a large dog, Ocho the Irish wolfhound got a lot of attention, including stories in the Valley Morning Star that profiled him as well as the Paws to Read program.

In June 2014, the four-and-a-half year old Ocho died of a heart attack. The newspaper published a story about his death, and the Harlingen library hosted a memorial in his honor. Approximately 100 people attended, and Brookbank and Cox received numerous cards and letters offering condolences.

“We were amazed at the outpouring of support we received,” Brookbank said. “We had no idea that so many people thought so highly of our dog and his accomplishments. In a way, his death strengthened our resolve to move forward with RGV Therapy Pets and work even harder to help more people and their pets get involved.”

RGV Therapy Pets was incorporated in January 2014 and in August of that same year, just two months after Ocho’s death, the IRS approved the organization’s 501(c)(3) status. The official nonprofit status allows individuals to make tax-deductible donations to the organization.

“We’re a small group and we plan to stay that way,” Brookbank said. “We don’t have big expenses but we do need operating funds to hold evaluations, conduct public awareness events and purchase supplies for incentive rewards for programs like Paws to Read.”

When the children’s literacy program first started, Brookbank came up with the idea of the Ocho Reading Challenge. Once a youngster read at the program eight times, he or she received a T-shirt with Ocho’s picture on it.

The program continues to this day and the young readers now have a selection of different dog photos from which to choose. They receive a new reward, either a shirt or a book bag, each time they complete eight reading sessions.

“We have to pay for the shirts and book bags, the transfers to put the images on the items and ink for the printer,” Brookbank said.

As more therapy pet teams become active new programs are beginning to take shape throughout the Valley. One new team is working with the Pharr Public Library to start at Paws to Read program, and another in Brownsville is pursuing volunteer opportunities with veterans groups.

“Becoming a therapy pet team is not difficult for the right person and the right pet,” Brookbank said. “So many people have such great loving relationships with their pets, and this is a wonderful way to share that love with others.”