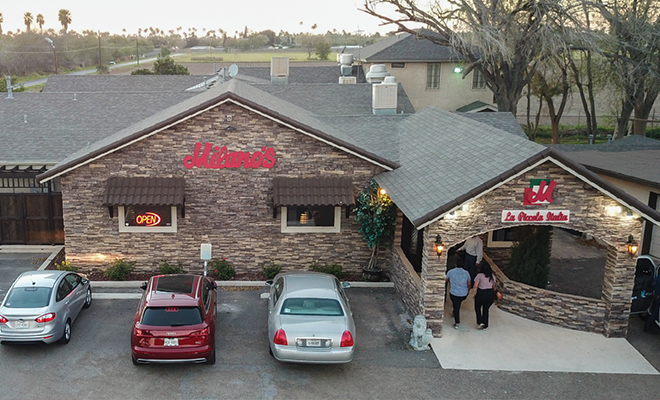 On the west side of Weslaco, just south of Expressway 83, resides a quaint brown brick home with a black tile roof. From the outside, the only clues that it’s a business are the red Milano’s logo and surrounding parking lot. Milano’s La Piccola Italia is the oldest Italian restaurant in the RGV, and it’s still standing after nearly 70 years of business. To this day, the original Milano family home, which is roughly 100 years old, serves as the restaurant building. 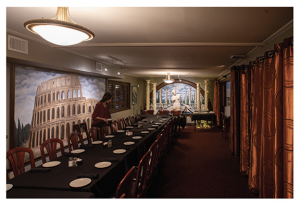 In 1944, Milano’s founders, Lisetta and Emidio Milano, along with son Lino and daughter Francis, moved from Chicago to Weslaco. They bought their home and land, but after experiencing hardships with citrus farming, turned their focus to catering for friends and family. They soon realized the Valley was in dire need of Italian food — namely, pizza.

“We were the first to bring pizzas to the RGV back in 1950,” said owner Angela Milano-Hernandez, granddaughter of Lisetta and Emidio. “Back then, nobody knew what pizza was.”

After catering for a while, the Milano family began making frozen pizzas out of their home and selling them to small grocery stores. Their popularity grew and the family decided to open a sit-down restaurant for customers to enjoy freshly made traditional Italian meals in a relaxing and cozy environment. On Nov. 4, 1955, the Milanos officially opened Mrs. Milano’s Pizza Place on the porch of their home. From there, the restaurant evolved over time into the Italian eatery it is today, featuring numerous menu items from traditional to modern recipes. 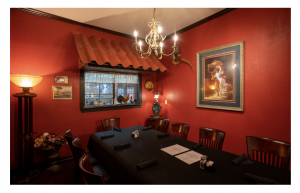 The cozy, family-friendly environment combined with the authentic Italian food on the menu makes for an enjoyable eating experience that keeps customers coming back, according to Charles “Trae” Cardenas III, longtime Milano family friend and patron of 50 years. He said some of his fondest childhood memories are eating pizza from Milano’s.

“It still has that home atmosphere and that’s always nice,” Cardenas said. “The restaurant is actually in the original Milano’s home building, so it still has that feel to it.”

The restaurant exudes a Mediterranean ambience from the exterior design details to the series of Italian city-themed murals in each of the restaurant’s rooms. Each city’s depiction and theme hold special significance to the Milano family. For example, one mural depicts Venice and was painted by Giovanna “Mama” Milano’s sister, Clara Pia Corrente, who is an Italian artist.

“It feels like a home because it was and still is,” Milano-Hernandez said. “Our customers are like family now after all these years. We see generation after generation.” 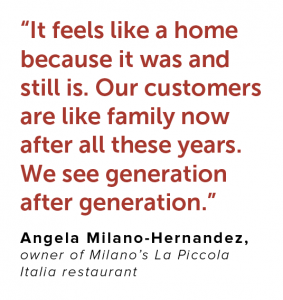 While Milano’s menu started out with pizza, over time, the family began adding a variety of classic pasta dishes, like spaghetti and lasagna, chicken parmesan, eggplant parmesan, and more. Milano’s is still known for these traditional dishes and continues to follow the same family recipes that have been handed down from generation to generation. Since the restaurant’s inception, Milano-Hernandez said the family has grown five generations. The third generation has now taken over operating the restaurant.

“The hardest shoes to fill are my grandparents and parents,” Milano-Hernandez said. “But I’m a lot like my grandma and mom in that I’m a perfectionist and want to see that everything is being done right, the way they envisioned it.”

Milano-Hernandez has literally grown up in the restaurant and evolved in her role throughout the years.

“My brother, my sister, and me all grew up working there from when we were little … since elementary school we were washing dishes on top of a crate so we could reach,” she said.

She began working at Milano’s in 1982, when she was in middle school, until college in 1988. She returned in 1993 and began to help manage the restaurant. She took over ownership in 1997 and has continued in the same role since then.

Milano-Hernandez met her husband, manager Moses Hernandez, when he started working for the restaurant in 1989. The couple has now been married for 13 years. Their son, Josiah, is also involved in the business and plays music with his friends outside for customers to enjoy as they enter the restaurant.

Presently, Milano’s has entrees named after family members or friends who have helped to inspire or create them.

For example, Eric Daniel’s Spaghetti Spectaculare is named after Milano-Hernandez’s nephew, Eric Daniel, who came up with the recipe for the dish. It is spaghetti tossed in Milano’s traditional sauce with oil and garlic, Italian cheeses, gorgonzola cream, and crushed red pepper topped with two homemade meatballs. According to Milano-Hernandez, it is one of the most popular menu items.

Chef Albert Garcia has been an integral part of the Milano’s team since 1996.

“He knows all the recipes like the back of his hand,” Milano-Hernandez said. “People who have been coming for 20 or more years will sometimes request old recipes and he is able to make them for them.”

Winter Texans are some of Milano’s longtime patrons who know Garcia and his cooking well.

“They always come back straight to the kitchen just to see me and say hi,” he said. “If there’s a day somebody else cooks a meal for that person, they’ll automatically know I’m not there.”

Garcia said his favorite part of his job is making customers happy.

“I like to cook for them and know that they enjoy the meal,” Garcia said. “They’ll either send their compliments to the chef or a tap on the window. It’s also the teamwork that I have in the kitchen.” 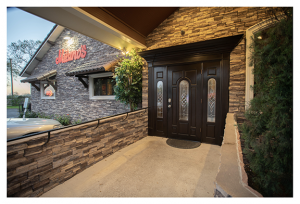 At the core of the business, Milano-Hernandez credits her family restaurant’s continued success to their foundation in their faith.

“Nothing would be possible without God at the center of our business,” she said.

Although the family business has faced its fair share of challenges throughout the years, Milano-Hernandez said seeing the positive impact Milano’s has on the community makes it all worth it.

“None of the moments that make it challenging can replace the joy in seeing customers excited about our food and service,” she said.

Milano’s Italian Restaurant is located at 2900 W. Pike Blvd. in Weslaco. The restaurant is open for dinner from 5 to 10 p.m. Tuesday through Sunday and 5 to 9 p.m. on Sunday. For the latest news and upcoming events, follow their Instagram and Facebook accounts @milanosrestaurant. For additional information, contact the restaurant at (956) 968-3677 or visit their website at milanos.us.com.

Who should RGVision feature next in our March/April Food Fave article? #JoinTheConversation at facebook.com/rgvisionmagazine.