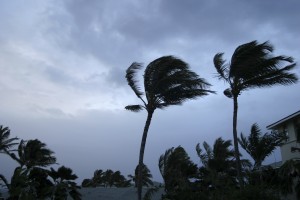 Nobody is taking this year’s potential slate of hurricanes lightly, at least that’s the observation by Frank Puente, who runs his business, Puente Roofing, out of Harlingen.

Puente is like many business owners in the lower Valley who stand to bear the brunt of a potential storm this season.

Because of the nature of his business, Puente said he has the opportunity to interact with residents across the Valley. Most of those he encountered are taking this hurricane season seriously.

“People are concerned. I guess because of a lot of the awareness and hype regarding the percentages of hurricanes this year, there has been a higher sense of awareness and concern,” he said. “I find myself calling out, and even giving a lot of information on what should be done and how we should be prepared.”

Puente feels his business plays a critical role during times of crisis. In the aftermath of Hurricane Dolly in 2008, his side project he calls Roof Over Our Friends (ROOF) helped the Harlingen community even as roofing scams became more prevalent in the storm’s aftermath.

When Dolly hurricane hit, Puente realized his company would be able to help immediately with restoration efforts. Puente said he would go back and help redo roofs that remained unfinished or left untouched even after families had paid 100 percent of their deposit to get it done through another company.

More recently, when Hurricane Alex hit the Valley in June, Puente arranged that a free roof be installed for a single mother, whose house had been severely damaged by flood waters.

“We’re just preparing with the right equipment, enough materials and contact with the insurance agencies just to see if there is anything we can do to help out in case we do encounter an emergency,” Puente said. “Of course, I have also been brushing up on education and awareness to my employees to prepare for any kind of event, whether it’s a tropical storm or hurricane.”

The overall outlook for the Atlantic and Tropical hurricane season has been considered extremely active, according to officials from the National Weather Services.

Factors leading to an active season include the diminishing of El Niño, and above-normal water temperatures in the eastern Atlantic, the area responsible for the most severe hurricanes, according to the NWS. By contrast, La Niña favors storm activity.

The NWS provides briefings to the business community and social agencies to prepare people for the hurricane season. This includes planning and exercises like scenarios with emergency managers and responders.

“One of the top 10 things that keep us up at night is, what happens when we cannot get product in, when Brownsville airports are underwater in a Cat-5 or Cat-4 hurricane,” said Johnny Cavazos, Cameron County director of Homeland Security, at an Emergency Preparedness Hearling earlier this summer. “On the other hand, our first step would be to try and fix roadways.”

The Valley has never endured a category-5 hurricane, according to the NWS. Hurricane Beulah hit Port Isabel as a cat-3 in 1967 with winds near 109 miles-per-hour, and resulted in a 20 foot storm surge. The hurricane caused over $1 billion in damages in today’s dollars.

A potential cat-4 or cat-5 hurricane in the Rio Grande Valley. A storm surge isn’t always dependent on the category of the hurricane, according to experts at NWS.

“You can have a very small storm that can produce massive wind damage, and still produce minor surge,” said Jeral Estupiñan, science and operations officer for NWS in Brownsville. “You can have a large cat-3, which develops in cycles, produce a massive storm surge of about 20 to 25 feet in the area… Padre Island would basically be underwater.”

In the upper Valley, Hidalgo County staff say they are well prepared ahead of a potential storm. Staff are in place who worked through Hurricane Dolly, and have become ready through practice in between major storm events, according to County Judge Rene Ramirez.

“We don’t take anything for granted,” he said. “We did very well, and we still have some challenges. I think like any event, it’s hard to predict what will happen. I think it is a result of the men and women here who went through the Dolly experience. We went through the rehearsal, we did the practices, but it’s different when it’s in real time.”

In June Hurricane Alex made landfall in Mexico as a category-2 hurricane “with category-4 features”.The storm strengthened once it merged with the dissipating Hurricane Darby in the Pacific bringing at much as 10 inches of rain in Hidalgo County.

“We saw what was happening, and we went ahead and got our EOC opened, started communicating with our shelters and with our emergency management and response teams, and had everybody in place,” Ramirez said. “It was talking with our local jurisdictions saying ‘these are our resources, which we inventoried over the years,’ so we know what we have and what’s working, so when it comes down to post events, we are ready to get on the field versus trying to figure out what’s out there.”

Studies that have been conducted over the last century show that the Texas Gulf Coast typically has a 30 percent probability of a hurricane strike. This year county emergency officials say they are looking at a 44 percent probability of a strike, which is a 14 percent increase, according to Hidalgo County Emergency management coordinator Tony Peña.

The No. 1 thing county officials are preparing for is a prolonged loss of electricity, Peña said. Hurricanes Dolly and Ike saw residents across the Valley without power for as long as 15 days.