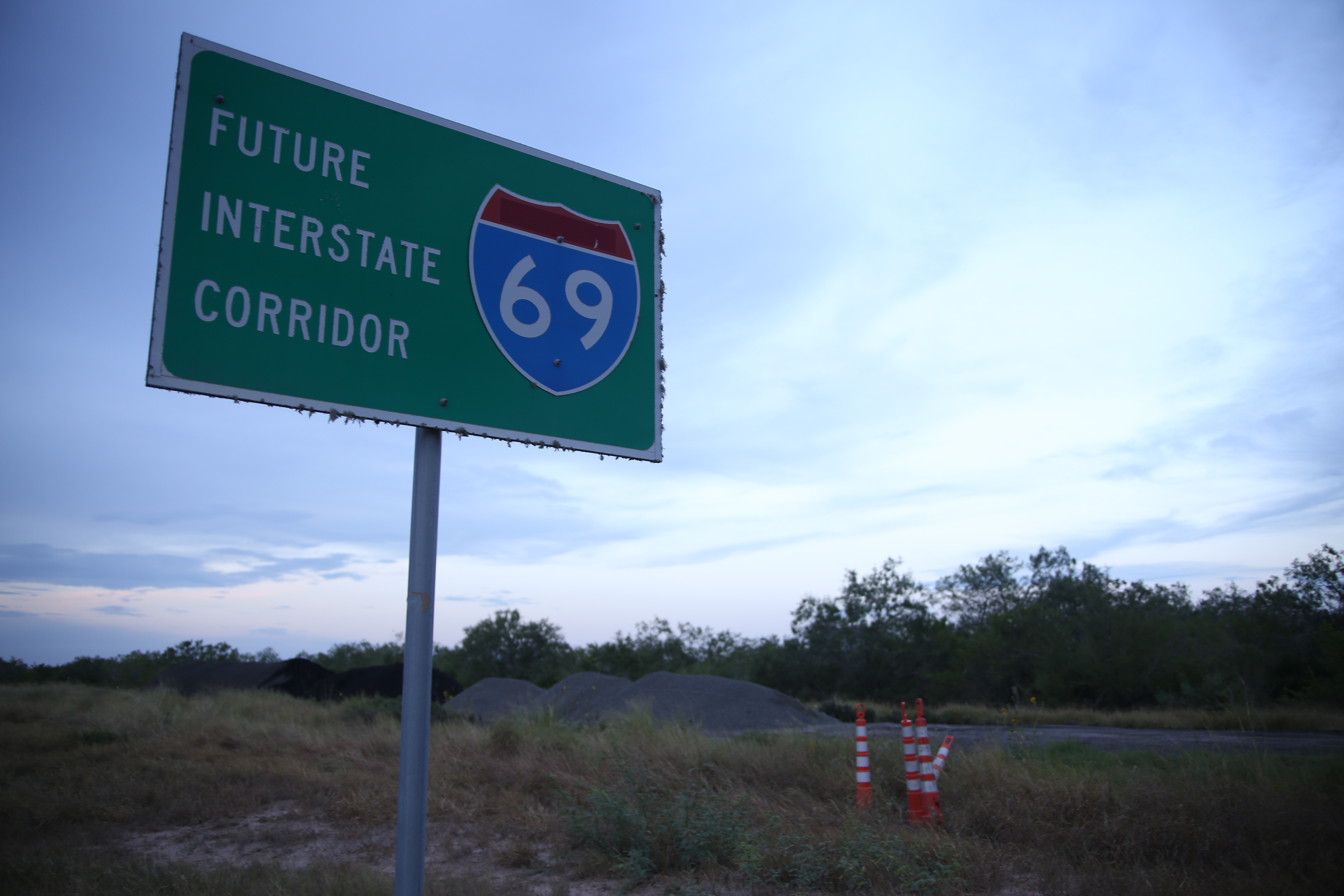 Coinciding with rapid growth in the region over the last three decades, federal, state, and local officials say they have taken a significant step in their goal to safely mobilize a growing population while nurturing the economic prosperity of the region for international trade.

With the announcement of the start of a new interstate in the Rio Grande Valley, people here now have a symbol of the growth, connectivity, and economic development for a critical region of our great state, according to Texas Transportation Commissioner Jeff Austin.

What does that mean exactly?  Well, it places the region, formerly the largest urbanized area in the nation located more than 100 miles from the nearest interstate highway, in the running to capitalize on the more than $1.2 billion in daily import trade between the U.S. and Mexico.

“I remember 26 and a half years ago, this was a subject of conversation in the Texas Legislature when I reported to Austin for the first time,” said Texas Senator Eddie Lucio Jr., D-Brownsville, who was among scores of federal, state, and local officials who attended the event in July.

When Congress passed its two year $140 million MAP-21 highway funding bill last year, it included language requested by the Alliance for I-69, which removed the requirement that completed highway segments must be connected to an existing interstate highway before they can be added to the Interstate Highway System.

In an effort to enhance mobility and attract international commerce to the growing Rio Grande Valley, the Texas Department of Transportation, with approval from the Texas Transportation Commission, officially designated 67 miles of regional roadways as part of the new Interstate-69 highway signs.

Being developed on existing roadways as a critical artery for moving freight, I-69 will ultimately become a 1,600 mile-long highway stretching from Michigan to Texas.

• US 77 through Cameron and Willacy Counties will be signed as Interstate 69 East.  This includes 53.3 miles of existing freeway starting at the Rio Grande in Brownsville and running north past Raymondville.

• The 13.5 miles of US 281 Freeway in Pharr and Edinburg will be signed as Interstate 69 Central, a designation that will eventually extend northward all the way to George West.

• The east-west US 83 Freeway that connects more than a dozen Valley cities has been designated as Interstate 2.   It extends approximately 46.8 miles from Harlingen to west of Mission.

With over 1.5 million people living in the region, having an interstate highway is not only needed, it’s necessary because of the amount of trade that goes through this area, according to economic development officials.

In 2011, the Texas Transportation Commission approved $3 billion in Proposition 12-Program 2 bond funding for highway improvements in Texas, which funded nearly $90 million to the two major highways running through South Texas, 281 and 77.

In Hidalgo County, more than $13 million was appropriated by TxDOT to fund sections between FM 2812 in north Edinburg, near the Love’s Truckstop, all the way to FM 490.  That funding included about $6.7 million for the section between El Cibolo Road near the Hidalgo County Jail and 490, and about $6.5 million from Cibolo to 2812.

In Cameron County, more than $100 million was appropriated for projects along Highway 77.  Nearly $65 million of Prop 12 dollars were designated for at least eight projects spanning the counties of Nueces, Willacy, and Cameron.

Before a segment of highway can be added to the Interstate Highway System, the American Association of State Highway and Transportation Officials (AASHTO) must take action to approve the application.  Additionally, FHWA must confirm that the highway segment meets the applicable Interstate designation regulations and criteria and approve any associated design exception requests.  Following that, the FHWA Administrator must take action to approve the addition to the national system. Finally, the Texas Transportation Commission must approve the designation.

TxDOT has programmed a total of $742 million in funded I-69 route projects to be completed over the next few years.

“If we can continuously find little pieces to do, to make it (I-69) closer to reality, and at the same time get the signage for our area in the Valley from Mission to Brownsville, and then north as far as we can go, that gives us a huge opportunity to start marketing our area and developing more jobs for our local people and allowing more international trade and commerce that we have to grow,” said Cameron County RMA Commissioner Garza after the TTC’s announcement in October of 2011.  “That’s what it’s all about.”

Texas is the No. 1 importing state in the country, with $1.2 billion a day in trade across the U.S.-Mexico border.  There are more than 2.5 million truck crossings at South Texas ports of entry every year.  That is why I-69 is so important, according to Congressman Ruben Hinojosa.

“This new interstate will be an engine of economic growth for the entire Valley,” Hinojosa said.  “It will allow us to take advantage of new transportation routes in Mexico that will bring even more trade and commerce through our ports of entry.  It will end the isolation of more than 1.5 million people living without an interstate highway system.”

I-69 is a federally designated route, sometimes referred to as the NAFTA Superhighway, that is supposed to run from the Texas-Mexico border to Port Huron, Michigan.  The project, however, has never received sufficient federal dollars to be completed.

To assist the project, TxDOT, at the urging of Valley legislators, agreed some years ago to upgrade Highways 281 and 77 to interstate standards in order to expedite the completion of I-69 in Texas.

Until recently, the Valley was the largest urbanized area in the nation located more than 100 miles from the nearest interstate highway.  Economic development professionals up and down the I-69 route have long argued that a lack of a signed interstate highway is a roadblock to attracting new industries and better jobs to their communities.

I-69 is also timed to coincide with the completion of the Autopista Durango-Mazatlan in Mexico, a $2.2 billion, 143 mile highway stretching from Mexico’s west coast will be the conduit for increased produce shipped to South Texas, according to economic officials in the region.

The highway, a part of which is also called El Espino del Diablo, the Devil’s Backbone, refers to a harrowing 6-hour trek from western Mexico over the mountains in the state of Sinaloa into Durango.  Sinaloa is arguably one of the highest producing states of perishable goods from Mexico into the U.S.

Scheduled for completion, the roadway is the final piece of the east to west highway connecting Mexico’s west coast from Mazatlan to Matamoros.

The trade route will facilitate the import of nearly $4 billion of perishable product into the U.S., according to experts on the border.

“Interstates like I-69 are vital to the entire nation,” Federal Highway Administration  – Texas Division representative Bob Tally.  “They are ‘rivers of trade’ that keep America’s economy strong.”

“This is an interstate, and we have the route and support of all along this corridor from here all the way up through Texarkana.  It’s going to open up trade markets and ease travel for everybody, not only in Texas, but through America.”

County Judge John Thompson from Polk County, Chair of the I-69 Alliance:

“The official designation and signing of I-69 in the Valley is the culmination of a 20 year collaborative effort between local, state, and federal leaders who recognize that this interstate will encourage economic development, enhance freight movements, and improve safety of the traveling public.  The Alliance for I-69 Texas is proud to have been a partner in this effort, and we are committed to working to see a seamless I-69 complete from Texarkana to Laredo and the Lower Rio Grande Valley.”

In the over 25 years of public service of which I have been involved with in our area, this has to be the most important, significant, and historical game changer for the entire South Texas region, both strategically and economically.”

“What a historical day for the Rio Grande Valley.  With the unveiling of 111 miles of designated interstate highway, the  Rio Grande Valley is one of this country’s largest markets, poised to become even more competitive with an interstate.  I-69 allows this region to connect to major Texas markets, as well as others across North America.”