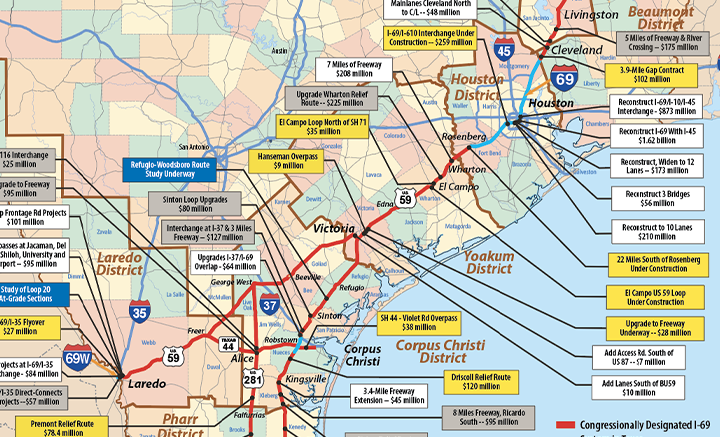 Texas is growing fast — you can feel it when you drive our highways. There are more than 1,000 new Texans every day and those coming from other states and other countries don’t bring any roads with them. Texas must quickly build more roadway capacity to keep pace with this growth.

Building Interstate 69 is an important part of the solution and it is essential that it be completed sooner rather than later.

The initiative to build Interstate 69 stretching from Brownsville, to Harlingen, Pharr, McAllen, Mission, and Laredo in Deep South Texas to Houston and on to Texarkana started in the early 1990s at the same time the United States, Mexico, and Canada were developing the North American Free Trade Agreement.  NAFTA took effect in 1994 and has had a profound impact on the growth of the Texas economy. Now, 25 years later, with the passage of the new modernized version of NAFTA, the need for I-69 is even greater.

According to the Texas Comptroller’s office, ports of entry within the state of Texas accounted for nearly $740 billion in international trade in 2018. Texas has 29 official ports of entry that serve as critical gateways to global trade.

“The Rio Grande Valley region is one of the fastest growing regions in the U.S.,” said David A. Garza, Cameron County commissioner and board member of the Alliance for I-69 Texas. “Development of I-69 will continue to spur economic development and support the dire need of transportation infrastructure for the 11.7 million pedestrians and close to 1 million freight trucks that transport people and goods though our region’s 13 border crossings.”

Interstate 69 is being developed as a series of incremental upgrades to existing highways — US 59 from Laredo to Texarkana, US 77 from Brownsville to Victoria, US 281 from McAllen to US 59 at George West, and SH 44 from US 59 to Corpus Christi — including a multimillion improvement to the interchange at I-2 at I-69C in Pharr.

Thanks to the region’s local elected leadership, the newly formed Rio Grande Valley MPO will collaborate with TxDOT to align with their mission of delivering a safe, reliable, and integrated transportation system that enables the movement of people and goods.

One-third of all Texans live in the counties along the I-69 System, including the fast-growing communities near the Rio Grande and in the expanding Houston urban region. Today’s Texas population of 29 million is projected to grow to 47 million in 25 years and undoubtedly there will be millions more living along I-69, which serves Gulf Coast manufacturing, all the Texas seaports, busy inland border ports, military bases in Corpus Christi and Texarkana, and diverse agricultural regions including the forestry industry in East Texas. Furthermore, it will bring new economic development opportunities to every region and help reduce congestion. 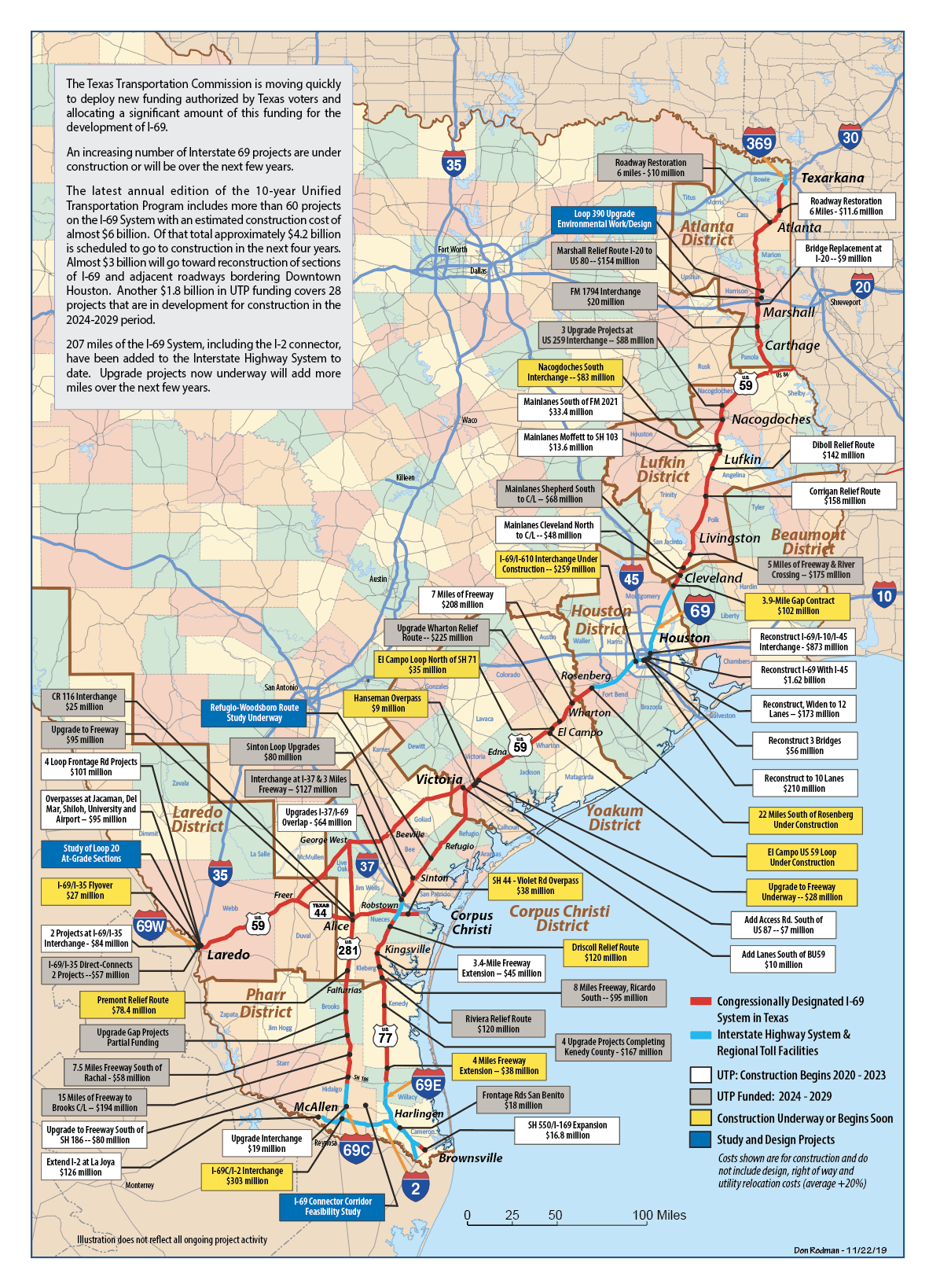 The original 41,000-mile interstate highway system was fundamentally an east-west system designed to connect the East Coast and the West Coast.  In Texas, the result was I-10, I-20, I-30, and I-40 carrying traffic east and west. Interstate 35 is the only north-south part of the interstate system that carries traffic into and out of the state. It is simply not possible to expand Interstate 35 enough to carry the traffic we have and that is coming. Completing Interstate 69 will create a second north-south border-to-border route to allow freight and the traveling public to move more efficiently.

The challenge in getting any highway built is finding the money to make it happen. Most people are unaware that the program that built the Interstate Highway System with 90 percent federal funding ended decades ago. Today, new interstates like I-69 must be built by the state with funds that come from state and federal sources. All projects, including those on I-69, must compete for funding against every other project across the entire state.

The existing highways that make up the I-69 route are already part of a major freight corridor for trucks that deliver things like groceries, fuel, furniture, lumber, grain, drilling equipment, military equipment, raw materials, and manufactured goods. Texas has seen dramatic growth in freight moving by truck in the past 20 years and projections indicate that will double over the next 25 years.

The champions of I-69 have much to cheer about in 2020. This year, the Texas Transportation Commission authorized funding for more than 60 projects on the I-69 System over the next decade with a cost of almost $6 billion. While this level of investment indicates the importance of I-69 to the state, there remain many miles to be funded.

As such, the Alliance thanks and urges federal and state officials to continue to pursue ways to speed up the completion of I-69. Texas needs I-69. We do not want to bear the cost of not completing I-69.

What road project are you most looking forward to being finished in the Valley? #JoinTheConversation at facebook.com/rgvisionmagazine.