After The Globe on 10th Street closed down in October, the new oldest grocery store in McAllen is still going strong, owned and operated by the Cavazos family for 42 years. 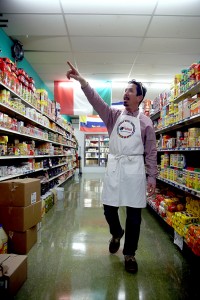 “Don Ruben” Cavazos started the store on 20th Street in 1971, but it quickly outgrew the space, so he bought an old Baptist Church down the street and set up shop there.  Today, Don Ruben and his wife, Adelaida, can still be found in that location on Gumwood Avenue and 20th Street, ringing up and chatting with customers.  Their son, Hugo Cavazos, also works there, while another son, Ruben “Rubencito” Cavazos, manages the store.

And currently the best way to describe Ruben’s Grocery is busy.  Customers with family in tow maneuver brimming shopping carts around one another in the narrow aisles where a variety of products clamor for shelf space.  All the signage in the store is hand-lettered with the exception of the aisle numbers, which are cut out of brightly colored foam board.  Below the digit on aisle 10 there is a little note in Sharpie: “This aisle maintained by: Carlos.”

The younger Ruben is constantly on the move and talking to customers.  He may be ordering a specialty item for a customer, greeting them at the door, or offering meal suggestions for an ingredient.  Once, he wore a pedometer to the store to see how much distance he covers while running around Ruben’s Grocery.  He said the answer was six miles.

Staying in business for 42 years is one part being the go-to place for hard-to-find products and nine parts customer service, according to Ruben Cavazos.

“When the big box stores came to the Valley, my dad was very worried,” he said.  “It’s getting harder and harder, but you have to find things that they can’t do.”

For example, Ruben Cavazos said one day a lady came in for chicken leg quarters – not a strange request.  But she wanted 30 pieces of only the right leg quarters.  The butchers asked Ruben if they should do it, and he said go for it.

“I said ‘That’s not for us to question, and if someone else gets all that’s left, they are not even going to pay attention to it.  Just do what the customers want,’” he said.

When Ruben Cavazos asked the woman why she needed only right chicken leg quarters, she told him she worked for a company that set up buffets, and her boss liked all the legs to point the same way.

“And see, like at the big box stores, they come all in one bag,” Ruben Cavazos said.  “That wouldn’t have been possible.”

Another thing the younger Ruben tries to provide at the store is that feeling of walking into a place where everybody knows the customer’s name.

“In the Latin market, you have to know your customers, like greet them with a hug and a kiss,” he said.  “I have some customers that run the raspa stands or the taco stands, and they can’t come in and buy a whole package of foam cups …so if you want five, I will sell you five.  If you want three, I will sell you three.  It’s a lot of work to sell things that way, it’s harder.”

Both Don Ruben and Ruben have also worked to stock the store’s shelves with hard-to-get foods, especially products from all over the world.

Ruben Cavazos points to a long row of boxes, which he says is the largest collection of yerba mate outside of Argentina.  Yerba mate is used to make the tea-like beverage mate.

“One thing we don’t do here is call these foods gourmet or exotic,” Ruben Cavazos said, while picking up a bag of frozen Peruvian peppers and fruits.  “Because for us, it’s like if people were to say ‘Oh my God, try this really bizarre, exotic food’ about mole or something, that’s not weird.  That’s just normal to us.”

“We try to get the most popular things, and if someone asks for it, we research it and order it,” De La Cruz said.  “The thing about people is that they want the food from their home country, even if it’s the same brand.”

She picks up a Goya can of beans to illustrate the point.

“Like we have these and (the can) will say made in an American factory or a Mexican factory or a Columbian.  People will come and check the label and take only the ones from their home country, and they come back and say it tastes better.”

Ruben Cavazos uses the store’s worldly reputation to his advantage.  Outside and inside there are flags from countries all over the world, and the nations are not chosen by accident.

When someone requests that their country’s flag go up, Cavazos tells them they must meet a minimum number of votes for the store to order it.  Jamaica just earned her spot on the outside wall he said, and right now a group of Nigerians are trying to get their green and white banner up.

“It’s good for them, and it’s good for me, because then they bring in more Nigerians to the store, and they see our products and keep coming back,” he said.

Additionally, Cavazos does not keep the niche products he orders for the store in their niches.

“When I look at the success of the grocery store, number one, two, and three are all customer service, all the way to nine.  But number 10 is cross-sales,” he said.  “You can’t just sell Colombian foods to Colombians.  Like, if I only sold vegetables to vegetarians, I would go broke.”

Besides being the oldest working grocery store in McAllen, the Cavazos’ customer service and wide variety of products is paying off in another way.  Ruben Cavazos said as many as 180 restaurants buy their ingredients from him, including local chefs.