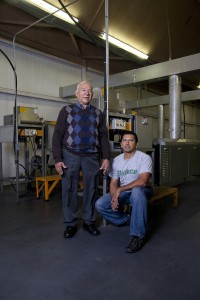 Ruby Red concludes it first round to spur innovation in the Rio Grande Valley
The City of Mission announced the first winners of its Ruby Red Ventures startup grant at their regular EDC meeting on Feb. 26. The grand prize went to tortilla chip maker, El Yaqui Mexican Corp., which received $25,000 to begin marketing its product in locations outside of the Valley.
“Our company manufactures tortilla chips in the Valley, and it’s a mixture of two different flours with a spice imported from Mexico, the flavor is totally different from what’s out there,” said Rafael Pacheco Jr. owner and cofounder of El Yaqui. “We are in the majority of HEB’s from Brownsville to Laredo, and we have a great distributor with Exquisita Tortillas, right now we are trying to see we can get up to Houston and Dallas.
“We just signed a sales marketing agreement with a company to see if we can expand. This money will go to expand, buy new equipment and hire more employees,” Pacheco said. “In order to grow, I need to hire more employees. We are a small company, but we are trying to grow.”
Other winners included window cleaning service, Brilliant Elegance, which was awarded $10,000. TMS Marketing Solutions received $5,000. That company has developed an informational app with contact info for doctors across the entire Valley. Opportunity Wall, a bulletin website in the style of Craigslist, but catering solely to students in college, received $2000.
“What we are doing is creating a playing field for the small entrepreneur,” said Mission EDC President and CEO Alex Meade. “As economic development professionals and beneficiaries of their hard work, we at Mission EDC feel obligated to continue to foster that spirit.”
The Mission EDC and the Mission City Council unanimously approved the creation of Ruby Red Ventures last July. Ruby Red is a $100,000 small business fund that aims to nurture entrepreneurial spirit and promote the creation of innovative businesses in the city.
In particular, it seeks to encourage entrepreneurially oriented Rio Grande Valley residents to expand and or launch new ventures. The goal is to allow participants to gain a better understanding of how to develop and follow a realistic business plan, as well as provide the participants with forums in which they develop skills in presenting their ventures.
Mission EDC had over 18 applicants last fall. Initial workshops began later that month, and business plans were reviewed by Mission EDC officials before applicants made their presentations.
Registration for the next round began Feb. 1 and continues until March 31. Winners will be announced by later summer, according to EDC officials.
Ruby Red consists of two rounds of funding per year at $50,000 per round and a maximum of $25,000 per company. Participants are required to attend small business workshops to help them prepare sound business plans.
“The entire process was actually very beneficial. It helped me see what we needed to do better and we could expand. It helped the company become much more transparent with what we were capable of,” said Samuel Shipp, owner of runner-up Brilliant Elegance. “The timing is actually perfect now, with Ruby Red Ventures, to take it to the next level and expand from a mom and pops shop into a full-blown company with all the name recognition that applies.”