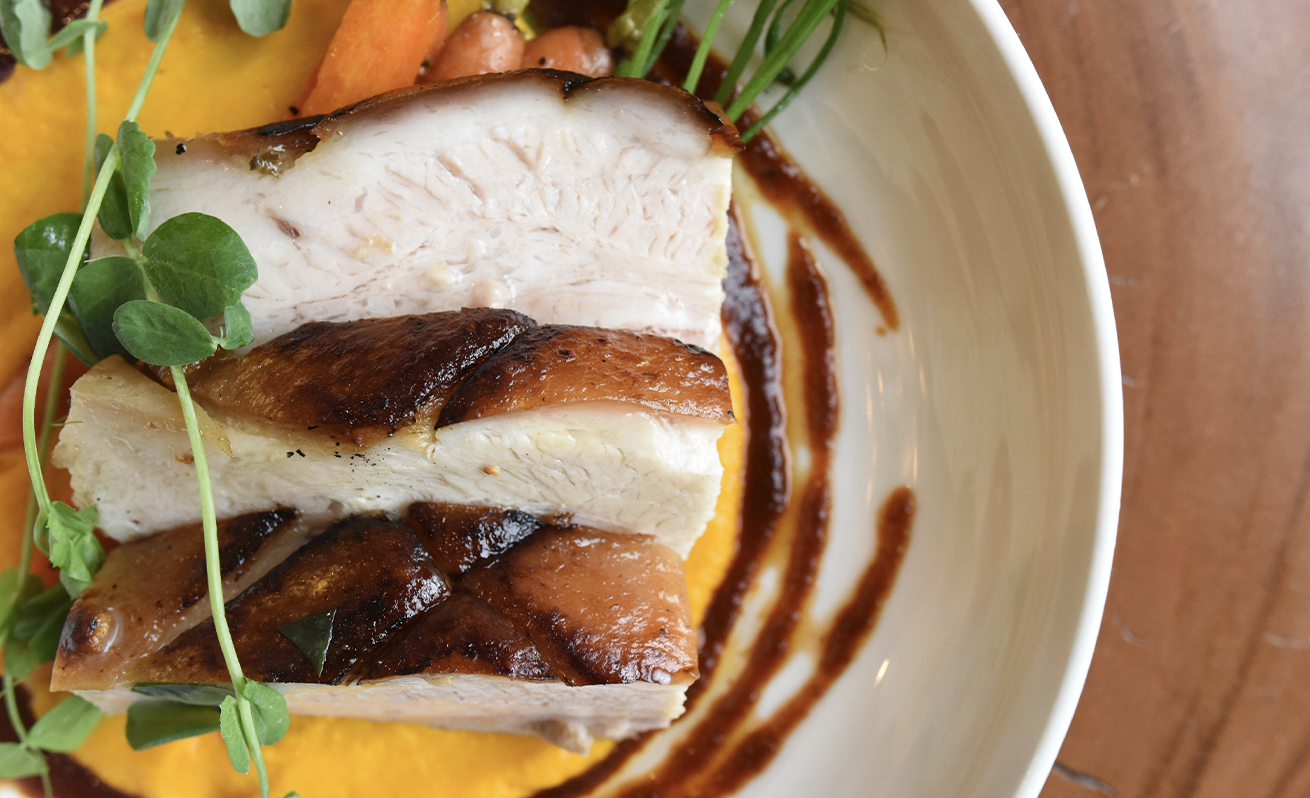 Beloved Valley restaurateurs Larry and Jessica Delgado are back doing what they do best: opening a new restaurant. Located on Main Street, just south of Pecan, Salomé on Main opened its doors for the first time March 8.

“We opened very quietly and didn’t do any sort of advertising or ribbon cutting. We’ve just had word of mouth spread the news,” Larry Delgado said. “So far, business has been great.”

Salomé has been visited by many of the Delgados’ customers from house. wine. & bistro. and SALT – New American Table who are looking for authentic and rustic Mexican cuisine.

The historic white building the restaurant is housed in hasn’t changed much from the outside, but once you step inside, you can see the inspiration from old Mexico with a clean, modern twist.

Unlike the vast majority of brightly colored Mexican restaurants, Salomé’s interior design palette is neutral and clean with antique vibes. 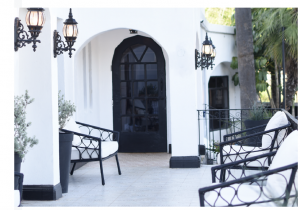 “All of our furniture is imported from Mexico,” Delgado said. “Our tables are made of worn eucalyptus wood, our bar top is a cypress slab and we have macramé wall art pieces to bring it all together.”

When it comes to the restaurant’s unique name, the Delgados’ inspiration has a local historic significance behind it.

“Salomé Ballí was one of the most prominent landowners in South Texas in the mid-1800s when she married John McAllen,” Delgado said. “What they left behind was the McAllen Ranch. To this day, the McAllen Ranch is initialed S.M.”

Delgado said he and Jessica wanted to pay homage to the city’s historic roots when they were naming the restaurant.

The inspiration for the restaurant’s menu comes from the Delgados’ travels to Mexico and California, as well as influences from Larry’s upbringing in the kitchen.

“In 2013 while visiting Napa Valley, we went to a Mexican restaurant and it was totally different than anything we had ever had before,” Delgado said. “I came to find out that 70 percent of Napa Valley was Mexican. It was an introduction to [foods from] Guadalajara and Oaxaca.”

Delgado said the experience made him eager to get back to his Mexican roots and share traditional, rustic, and elegant Mexican cuisine with his home town.

“My mom and my grandma were the best cooks ever and both crushed their spices in the molcajete,” he said. “I learned how to cook from watching them and that drove me to research how we could incorporate Mexican food in a different, modern approach to traditional interior Mexican flavors.”

Delgado explained that Salomé utilizes pre-Hispanic cooking tools to create their dishes. One of the cooking techniques the restaurant uses to make its corn masa is called nixtamalization, or nixtamal in Spanish. 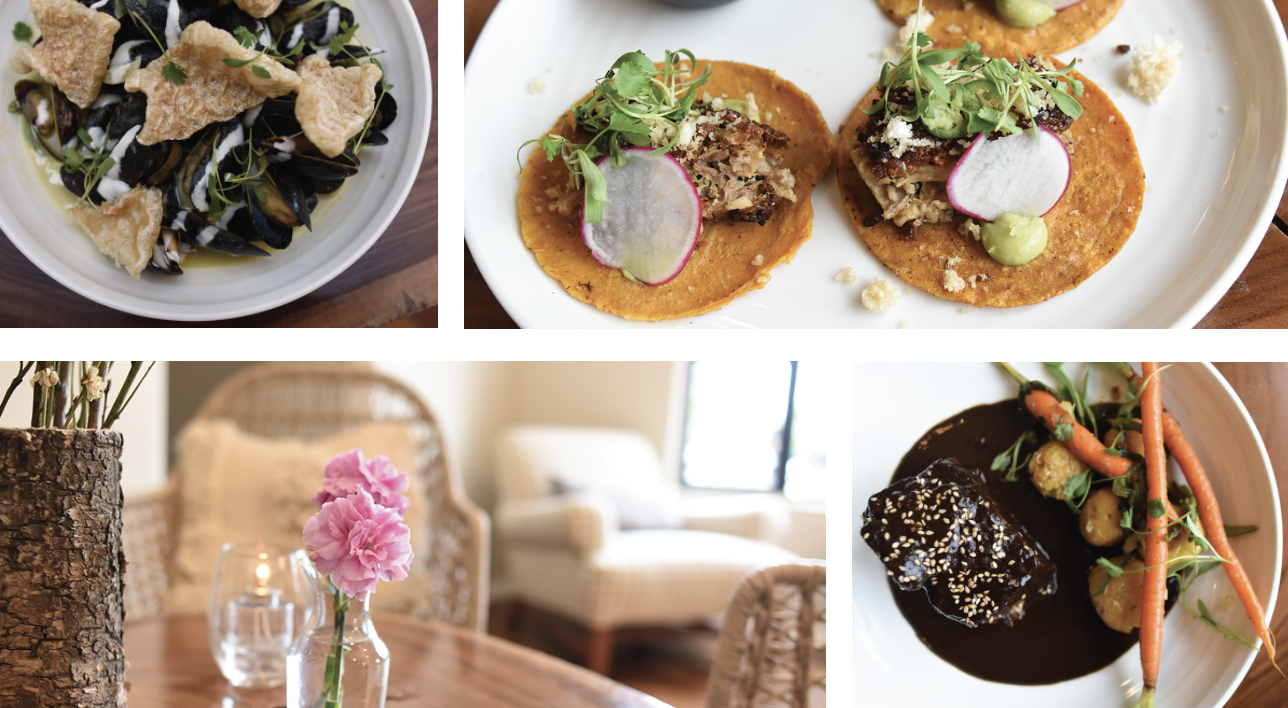 “We start with corn and cook it with calcium hydroxide,” he said. “It’s the process of cooking corn in this alkaline solution and letting it steep overnight to begin making masa.”

The homemade corn tortillas are made with non-GMO blue, white, and red corn sourced from local growers, which are ground with a molino, or corn grinder.

“It’s the Spanish word for braised,” he explained. “It’s a braised beef short rib, served in a pool of Oaxacan mole negro. It’s like no mole you’ve ever tasted before. It’s served with smashed poblano potatoes and heirloom baby carrots,” he said. “It’s rustic and elegant at the same time.”

On the opposite side of the savory food spectrum, Salomé on Main’s desserts have been a fast favorite with their customers, according to head pastry chef Lyzette Alanis.

“A lot of our customers are coming back for the desserts,” she said. “One of our most popular desserts right now is the Cocorayado.”

The Cocorayado is a coconut mousse covered in dark chocolate shaped like a coconut, filled with a passion fruit gel, garnished with macadamia nuts, and topped with coconut granita (similar to a raspada) on a bed of brown sugar that’s reminiscent of sand.

Alanis started out at house. wine. & bistro. as a server after graduating from culinary school and later was given the opportunity to do pastry work by the Delgados. She is now the head pastry chef at all three of the Delgados’ restaurants, currently spending much of her time at Salomé.

“I try to do a fun, playful take on Mexican ingredients with our dessert menu,” Alanis said. “I was influenced when I got to travel to Mexico City and it’s been fun to incorporate those flavors in our desserts.”

Delgado explained that a big component of the restaurant experience at Salomé is its outdoor seating area.

“We have a huge patio, it’s probably more than half our seating,” he said. “We have a chalk wall and a play pit to keep kids entertained while their parents can enjoy an exceptional dining experience.”

In addition to being kid-friendly, Delgado said that Salomé’s patio seating is pet-friendly, as well, which is great news for pet parents.

Salomé on Main is located at 1409 N. Main St. in McAllen. Its hours of operation are 5 to 10 p.m. Monday through Thursday and 5 to 11 p.m. Friday through Saturday. The restaurant’s phone number is (956) 267-1150. To make reservations, see the menu, or for more information, visit salomeonmain.com.