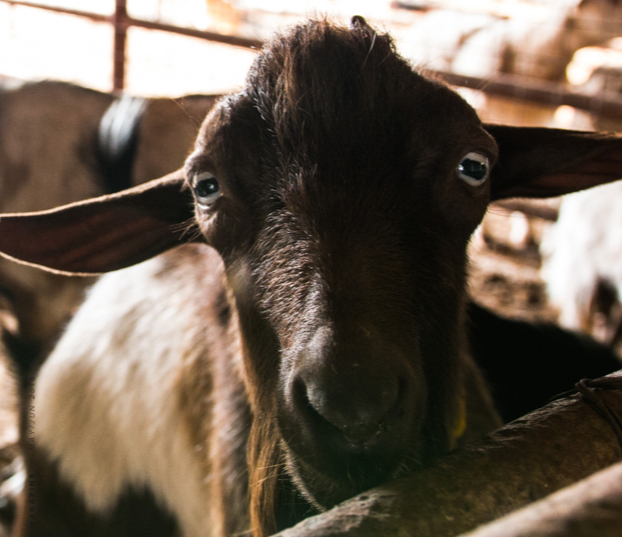 Nicole Sosebee remembers it like fragments of a foggy dream. She can recall only bits and pieces, but the experience changed her life and those around her forever.

At the tender age of 2, Nicole can recall her grandmother handing her an orphaned baby goat to bottle feed because its mama had died.

From that day forward, like Mary’s proverbial lamb, this baby goat followed and worshipped Nicole wherever she went. It became more than just a loving pet; it created in Nicole a love for goats and farm living that now dominates her life and that of her family.

In what can only be described as a workaholic’s world, Nicole homeschools her three children, manages a farm with crops and animals, and nourishes a thriving dairy business of goat products.

She owns and operates Edens Lilly Farm and Dairy on property she and her husband, Jacob, own near Progreso, south of Weslaco. Helping in the daily chores are the couple’s children: Crawford, 7; Kaid, almost 5; and Emma, almost 2.

It’s a grueling job that keeps her running all day, from milking time at dawn to often late-night hours. And in her “spare time” Nicole is also developing a hugely popular educational outreach program to show city folk where their food comes from.

“A few years ago, we purchased land my great-grandfather farmed and which my grandfather made his homestead,” Nicole said. “It had fallen out of family ownership for a while. In fact, the owners we bought it from let the land sit vacant for years, but we slowly brought it back to life.”

Nicole said she and her husband “planted” the farm with just a few dairy goats, chickens and a large garden.

“We soon noticed that much of our pasture grasses went uneaten, so we watched, researched and discovered that each species of animal consumes different types and parts of plants. So, to get the most from our land we needed to expand.”

Cattle were added to munch the pasture grasses, goats to “mow” the weeds and brush, pigs to clean up dropped seeds and roots, and chickens to spread manure and eat bugs to cleanse the land.

“We densely stocked the pasture,” she said, “and now all parts of the farm are utilized as the animals fertilize every inch of land.” 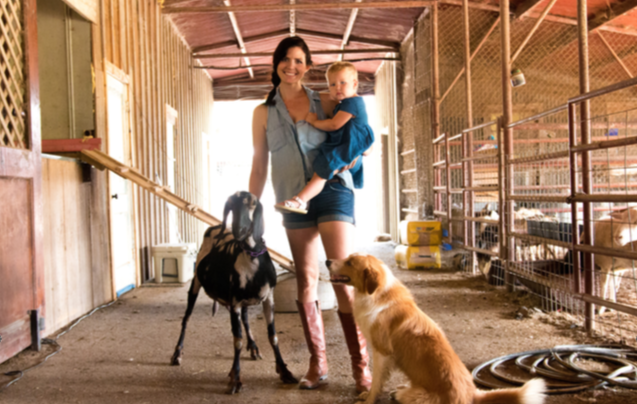 The final step in creating the Sosebee’s “farming ecosystem” was to allow the land to rest for 21 days so that plants can regenerate and grow with vigor from the natural fertilizers to once again nourish the herds.

Nicole began her expanding commercial enterprise by making soap from goat’s milk that customers first acquired by word of mouth.

“Commercial soap has lots of chemicals in it that some people find harsh and irritating to the skin,” she said. “Soap made from goat’s milk, which has a very high cream content, has lots of natural moisturizers that people love.”

Seven years ago, she began selling her soap every Saturday at the Growing Growers Farmers Market, now located at Firemen’s Park in McAllen at Business Highway 83 and Second Street.

“The only Saturday I was not at the farmers market was the week my second child was born,” she said. “But I was back the next Saturday.”

Nicole said she sells between 200 to 300 bars of soap weekly. With proceeds from two years of soap sales, she started her dairy operation five years ago because demand for her goat’s milk was rising, also sold by word of mouth.

“Some people can’t tolerate cow’s milk,” she explained. “So, goat’s milk is a blessing, especially for mothers who can’t breastfeed, or maybe their babies can’t tolerate formula or cow’s milk.”

Today, Nicole has acquired almost all the dairy licenses that the state of Texas issues, which require strict adherence to seemingly endless requirements.

“The license to produce raw milk is the most stringent,” she said.

She’s become such a self-made expert in goats, Nicole rarely has to call on a veterinarian’s help, and even dabbles in artificial insemination.

“The birthing process is amazing,” she said. “Goats usually have two to four kids at once, and sometimes two of them will try to come out at the same time, so I have to push one back in so they can all come out safely. I do a lot of rearranging, and if things ever get too difficult, I always have my grandfather to call for pointers.”

Goats are social animals with peculiar personalities that behave much like naughty 2-year-old children, Nicole said. They are always exploring, tasting, and getting into mischief.

Her goats are kept in stalls at night and put out to pasture during the day, moving in an orderly fashion under her supervision — until a new person comes on the scene.

“They’re trained to go up a ramp, but when new people are around, they’ll misbehave,” she said. “It takes a while for them to get used to new people around.”

Nicole is now highly interested in goat genetics and developing her own unique line of superior milkers. She is currently in the process of switching her 50-goat herd to a new breed called Mini Nubian, which are produced by crossing her Nubian goats with Nigerian dwarf goats.

“It’s a cross I tried on a whim, but I’m finding out that others are doing it, too,” she said. “Turns out Mini Nubians are very hearty; they are very heat tolerant and have a resistance to parasites, which thrive in Texas heat.”

She currently has 16 Mini Nubian goats, 12 of which are now of milking age, and 10 more will be milking next year.

The dairy is her primary business, she says, but education and community outreach activities on the farm are also picking up. Outreach includes public speaking, hosting school field trips, and organizing farm clinics and tours that quickly sell out via social media.

“Sharing what we’ve learned is one of our greatest pleasures,” Nicole said. “We hope others sense the enthusiasm we have for this life we live. We enjoy bringing people to our home and farm to ask questions and experience the farm life, if only for a day.”

The last public event she held on her farm, which attracted 300 children and adults, sold out in two days via social media, and more are scheduled for this summer.

“The last day camp we had sold out quickly, but it was so wonderful to watch so many children connect with the land, bottle feeding baby goats and learning with amazement at how nature can provide for all of us if we take care of it,” she said.

Barbara Storz, who founded the Growing Growers Farmers Market in McAllen 10 years ago, and host of Agronomically Speaking with Barbara Storz on Saturday mornings on KURV710 News Talk radio, said Nicole is nothing short of amazing.

“Nicole is totally dedicated to the farming way of life; farming as a lifestyle, not just a job,” Storz said. “She has solid values, is very hard working and understands that rewards in life take time. It’s been a joy watching her business grow and working with her at our farmers market.”

For more information about products or public events at the farm, go to https://www.edenslillydairy.com or on Facebook at Edens Lilly Farm.