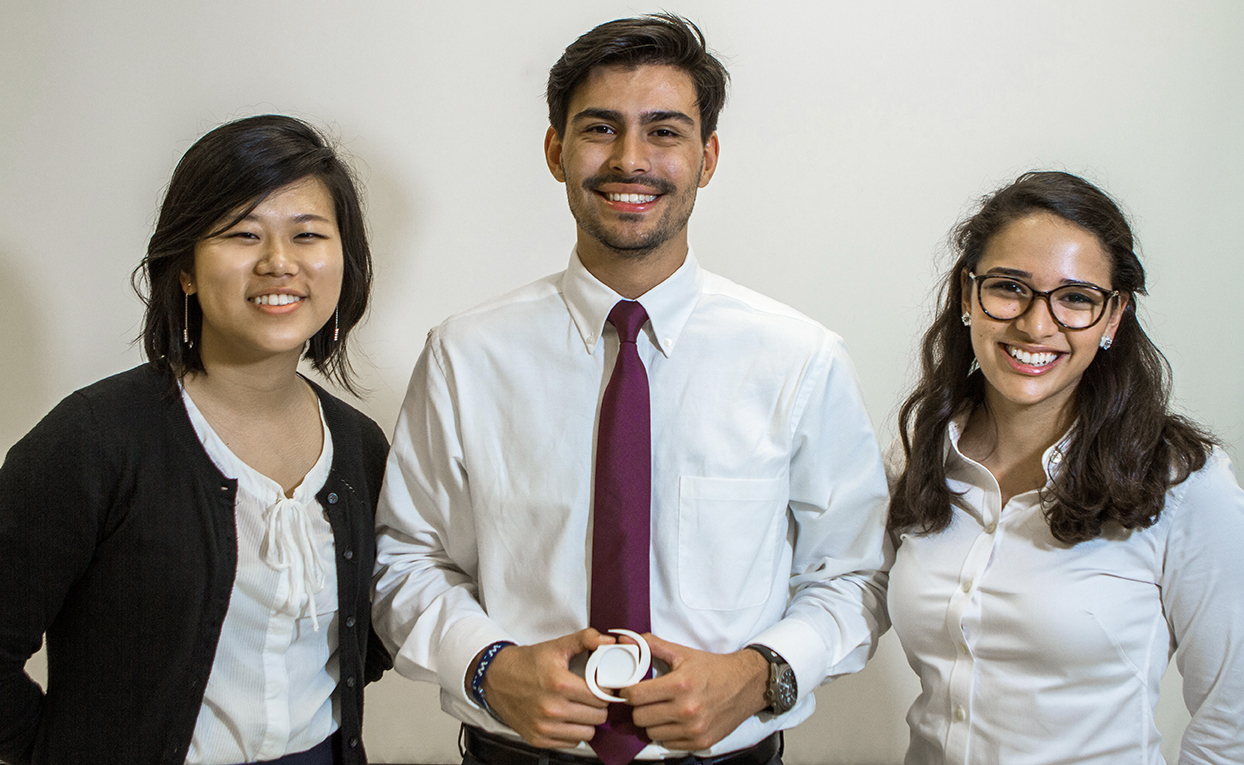 When seniors at The Science Academy of South Texas throw their hats in the air on graduation day, they know they’re ready for college and career success. Their high school made sure of that, exposing them to real-life challenges like the engineering department’s senior project conference.

This year marked the second time engineering-track seniors presented their projects, and it was an exciting event. The room was packed with parents, teachers, students, and even some local university professors. According to Irma Castillo, assistant principal of the Science Academy, the school is hoping for an even larger turnout next year. “Students used to present their projects in their classrooms, but we recognized that more attention was needed,” Castillo says. “We want the conference to reflect all the hard work our seniors have put in.”

All of this year’s projects were outstanding. First place went to a team who invented a product that prevents painful cuts and tears caused by braces. They presented their creation, a layer of protection placed directly over the bracket, as an alternative to dental wax. Other project creations included water transportation tanks for children in third world countries and rodent-killing compounds that won’t harm pets.

According to Nellie Houston, the Science Academy instructor who oversees the projects, seniors get to choose their own topics. The only stipulation is that they create a solution (in the form of a product) to an existing problem. “We don’t tell them what to do, and that is powerful,” Houston says. “Their topic can be anything from race cars to bridges to micro-technology as long as they’re interested in it. This creates the power of ownership – students hold themselves accountable for a great final product.”

Senior projects are the culmination of everything Science Academy engineering students have learned since freshman year. They let students apply the physical skills they’ve learned in classes like 3-D modeling and 3-D printing. They also make use of the knowledge students gained from courses such as civil engineering, architecture, and aerospace engineering.

The projects were first created as a way to distinguish Science Academy students from other high school students – to actually develop them as engineers rather than engineering students. Indeed, the senior project experience gives students a taste of engineering life. The process helps them develop critical field skills such as identifying an opportunity to build something useful, perfecting their creation, and then sharing their work with peers.

“The projects directly support their future engineering careers. Students are able to apply the knowledge and skills they’ve learned to the creation of a product,” Castillo says. “Plus, they learn other important lessons: how to work as a team, how to see a long-term project through to the end, how to take feedback, and much more.”

Completing a yearlong project is hard for anyone, let alone a senior in high school. But the engineering students at The Science Academy of South Texas get the job done. Senior projects not only add to the tradition of excellence at The Science Academy – they benefit the Rio Grande Valley at large by ensuring our younger generation is prepared for lifelong success.