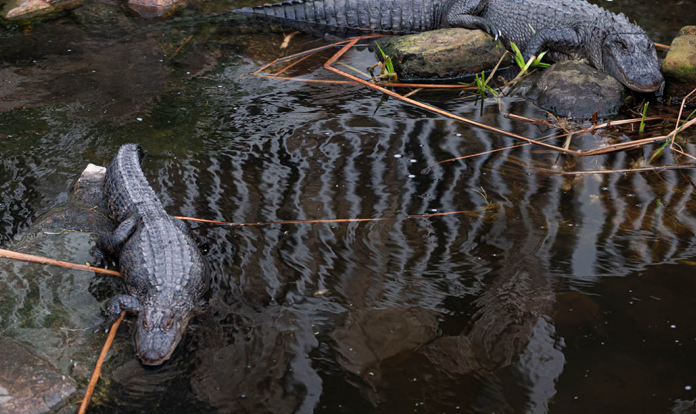 Before humans roamed the earth, dinosaurs inhabited the planet … until 65 million years ago, when they went extinct. However, not all dinosaurs died out.

Today, the southeastern U.S. counts about 5 million dinosaur descendants that can be found in freshwater ponds, lakes, swamps, and marshes from North Carolina to Texas: the American alligator.

The Rio Grande Valley is home to nearly 25,000 alligators, some of which can be seen at South Padre Island Birding Nature Center and Alligator Sanctuary. The birding center first opened its doors in 2009. In 2019, the alligator sanctuary was added to serve the nuisance alligator population in the RGV and other parts of Texas. According to the organization’s website, aside from a few wild alligators that reside in their wetlands, most alligators on the property are rescued nuisance alligators, meaning they’ve been rescued from backyard piers, ponds, or pools and were threatening public safety. Now, they live in enclosed habitats.

In contrast to crocodiles, which can survive in either fresh or saltwater, alligators can only survive in freshwater. They can tolerate saltwater for a short period, but need to return to freshwater to drink. With the center located around the Laguna Madre Water District, where there’s a freshwater outflow, alligators have been able to reside in the area for years.

Today, visitors can learn about the American alligator through the center’s educational programs while seeing about 50 live nuisance alligators roam the sanctuary. Alligators in the sanctuary are mostly juvenile alligators that range from 3 to just over 5 feet long. Once an alligator reaches 6 feet, they are transferred to Gator Country, a partner sanctuary in Beaumont, Texas. 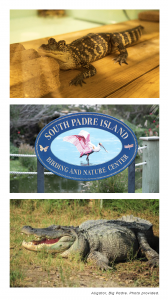 The SPI sanctuary’s main priority is to educate the general public about the native habitats, ecosystems, and animal species of the RGV’s coastal area. Over the last couple of years, the organization has focused on the alligator population and how to keep them from being a safety problem.

“I like to teach the community about how to create habitat at home and educate them about our local and migratory wildlife just to build awareness about it,” nature specialist and educator Javier Gonzalez said. “Once you build awareness, and you start to see it, and then you start to appreciate it. Once you build an appreciation for nature, then you want to conserve it.”

Gonzalez explained that the fate of a nuisance alligator is bleak.

“You cannot relocate (alligators) back into the wild because their behavior has changed,” he said. “They’re known to just come right back home. They have a homing ability. They just show up again next week. They can swim 60 to70 miles back home. Relocation sometimes is really not an option, and they get put down.” 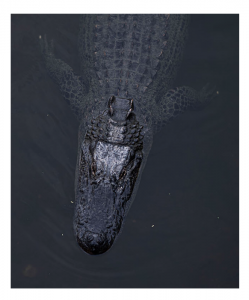 The specialist said the center holds a permit from the Texas Parks and Wildlife Department to house a sanctuary on the property to help combat the nuisance alligator problem. He said the opportunity to help the general public learn about the creatures came about when one of the center’s wild alligators, Banker, got into some trouble.

“He was free to roam. And all of a sudden, he started wandering out by some boat channels that run behind some condo buildings just south of the Birding Center. Well, he was being fed fish scraps by fishermen,” he explained. “At that point, he became a nuisance. He was deemed a nuisance by Texas Parks and Wildlife. Once deemed a nuisance, that alligator needs to be removed by law.”

Banker served as a big part of the wetlands as an apex predator and also created ecosystems for other species to thrive in. Plus, visitors of the center loved to spot the wild gator if they were able to. Luckily, Banker was rescued and transferred to Gator Country.

Through this ordeal, the SPI Birding and Nature Center decided they, too, wanted to help rescue and spread awareness about the magnificent creature. Gonzalez said the important thing for people to know is that alligators can remain wild.

“This is one of the most important animals in the wetland,” he said. “As an apex predator, they create a balance in nature by keeping the other animals in check. They are also one of the few animals that actually create habitat. They are cold-blooded. So when it gets too hot or cold, they can’t regulate their own temperature, so they dig huge holes. Those holes over the years get bigger and create habitat for other animals. Later on, the hole becomes a pond with fish, turtles, and frogs that live there. So alligators are a major part of the ecosystem, but they just suffer from a lot of myths.” 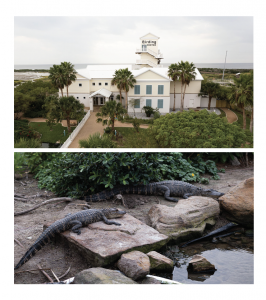 Two key attractions at the sanctuary are Big Padre and Lady Laguna, which are both permanent residents of the sanctuary. Big Padre, a 54-year-old male measuring 12 feet 6 inches and pushing 900 pounds, is one of the first gators visitors can see along the center’s boardwalk along with 27-year-old Lady Laguna, his companion.

“I would say the best way to see him is to come early and through the wintertime,” Gonzalez said. “He’ll come out of the water to try to heat up with the sun — especially on the days after a cold front when the sun comes back out, and the temperatures rise. He comes out in the heat and lies out on the bank the whole day. That’s when you get to see his whole size, and it’s pretty impressive.”

To learn more about the American alligator, the sanctuary offers daily Gator Talks at 11 a.m., 1:30 p.m., and 3:30 p.m. with the purchase of a general admission ticket. Attendees can learn about alligator awareness ecology and important safety tips. The center is open daily from 8 a.m. to 5 p.m. with the exception of Thanksgiving, Christmas, and Easter.