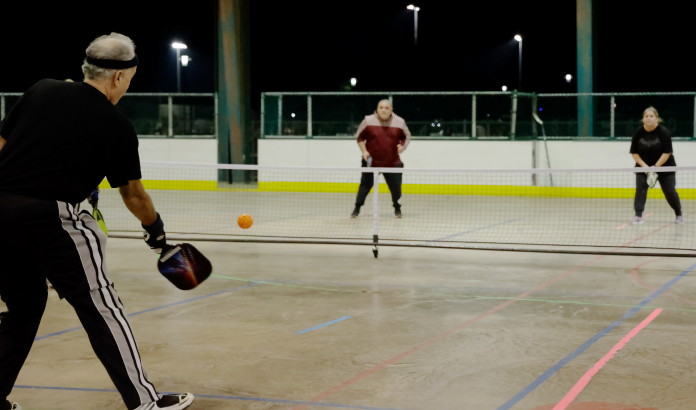 A sport rising in popularity is swinging and serving its way across RV parks and community centers nationwide. Pickleball has surpassed “fad” status, with matches being telecast on networks, including ESPN.

The game is a smashing success with senior citizens. McAllen Parks and Recreation’s Kristyna Mancias was introduced to the sport around four years ago while in charge of a city community center.

She has moved up to superintendent of athletics for McAllen Parks & Recreation and oversees soccer, inline hockey, and flag football, as well as McAllen’s “house leagues,” such as basketball at community centers, the track, and field team, and, now, pickleball.

“When I was at the Palmview Community Center, I worked with the pickleball league there,” she said. “We would see the seniors come in in the afternoon. During our Golden Age Olympics, which happens in the month of January and February, we hold a huge tournament. Back then, I didn’t know how big it was.”

The sport has skyrocketed in popularity in the last year. Big-name athletes have been spotted on the court, and even superstars from other sports, like Lebron James and Tom Brady, are investing in their own competitive teams. 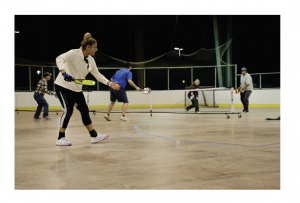 “It was popular among Winter Texans, but recently I’ve been seeing it take hold in different places,” said Mancias, citing Chicken N’ Pickle, a food chain that serves up grub alongside courts. “I thought maybe we can do a pickleball league for everybody — for all of the community. That’s where I got the idea to do that there at McAllen Sports Park’s Pavilion.”

Mancias said as a parks and recreation professional, it’s encouraging to see all ages of adults on the court getting a sweat in and having fun.

“It’s super amazing because the thing about pickleball is you can play at any age,” Mancias said. “You have people in their 20s or 30s or 40s, but then…the other day… we had someone sign up to play who was 75.”

Currently, McAllen only hosts adults. Interest will determine where pickleball can go next. If you find the right Facebook group, you can find a pickleball game almost every night Valleywide.

Mancias said serving up a growing sport for residents and visitors is part of the department’s mission.

“We try to stay with the trends, and the main thing is to have people active and participate in recreational programs,” she said. “Some things hit and others miss. For us, it’s trial and error.

“We put a lot of effort and thought into our programs. What is unique about pickleball is that it has spread almost completely by word of mouth. We haven’t put a lot of advertising out.”

First, players must find the facility, which is tucked away inside of McAllen Sports Park. It is easiest to access the pavilion and rink entrance of the park from 34th street, just northeast of Target.

The pavilion continues to entertain

McAllen Sports Park Pavilion is undergoing a renaissance. Originally built in 2005, the covered pavilion that houses a full-size roller rink and sizable bleachers is seeing more action than ever before.

You might have missed it because of the sea of soccer fields, but in a seven-day week, the pavilion supports sports on inline skates, roller skates, shoes, and even wheelchairs.

Mancias and the facilities team keep the pavilion dry and ready for the next event.

“We look at that facility, and no one else really has something to this extent in the Rio Grande Valley,” Mancias said. “It’s a huge covered pavilion with really good lighting and seating. It’s in a location central in McAllen, and it’s just perfect for multi-purpose sports. We have hockey, roller derby, and pickleball.”

On one night, you might find six pickleball courts full of active seniors, and the next morning, a group of special needs athletes breaking a sweat. And by nighttime, again, adult and youth hockey players are practicing on wheels.

Mancias has been a part of numerous initiatives to create more inclusive play and athletic spaces for people with disabilities, including work with the Capable Kids Foundation.

“Our Special Olympics use it for bocce ball in the mornings,” she said. “People with special needs in wheelchairs might not be able to be on grass, but that surface is perfect.”

Pickleball nights are Mondays and Wednesdays from 6 to 9 p.m., the fee is $1, and paddles are available to borrow.