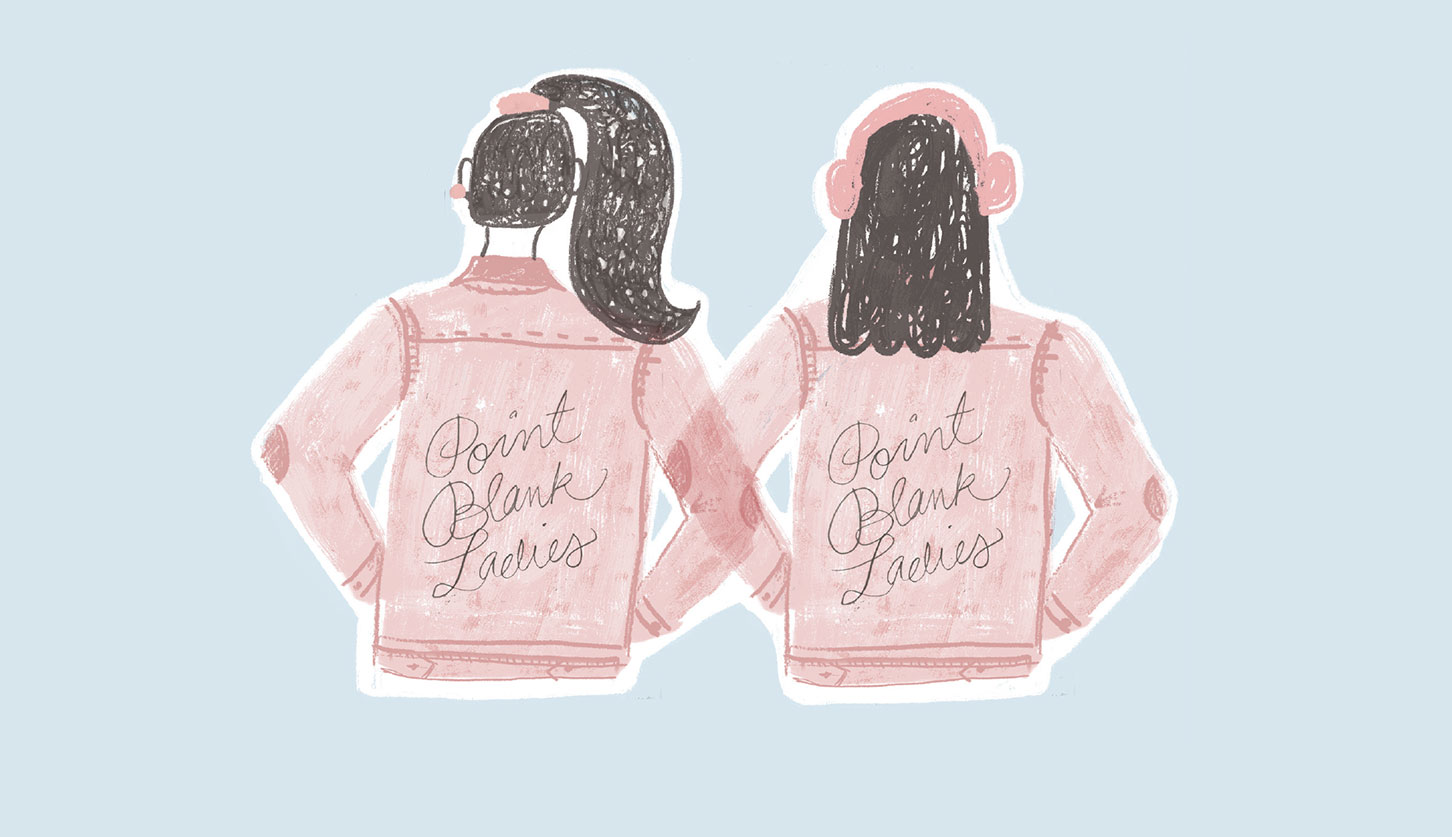 Point Blank welcomes all to the range

“I’ve been shooting as far back as I can remember,” said Danny Gallegos Jr., and he isn’t talking about photography — his dad taught him about firearms, ammo, and taking aim early in life. He remembers long car trips out to ranch properties for the lessons; once outside of the city, they could enjoy target practice. The need to travel so far to enjoy their favorite hobby sparked his passion for Point Blank, the shooting range and hunting supply store located in Pharr, Texas.

“We wanted a nice facility where people don’t have to travel too far to shoot — somewhere indoors so they don’t have to contend with the wind and heat of South Texas,” he said. “Now that we have that space, we want to help more people get started with shooting. We try to create an environment where they feel welcome in the range.”

The variety of people lined up for their turn to shoot serve as testament to his vision, as not only is Point Blank providing a place for gun and archery enthusiasts to purchase their gear and practice their sport, they have also fostered new experiences and relationships by hosting “Ladies Day” every Tuesday for the last several years.

What started as a monthly Ladies Night grew into an all-day opportunity every Tuesday for women who have a desire to shoot a gun or bow. Saira Gonzalez had never shot a gun before coming to Point Blank’s Ladies Day, but she liked what she saw and was back for her second time shooting. “There were a lot of girls — like 80 percent of the people shooting were girls because it was a Tuesday,” she said, adding that her first time in the range wasn’t as scary as she thought it was going to be. Though Gonzalez was drawn to Point Blank for personal safety reasons, Ladies Day is an opportunity for anyone: whether learning to defend themselves, trying something new to step out of their comfort zone, or just blowing off a little steam against a paper target. 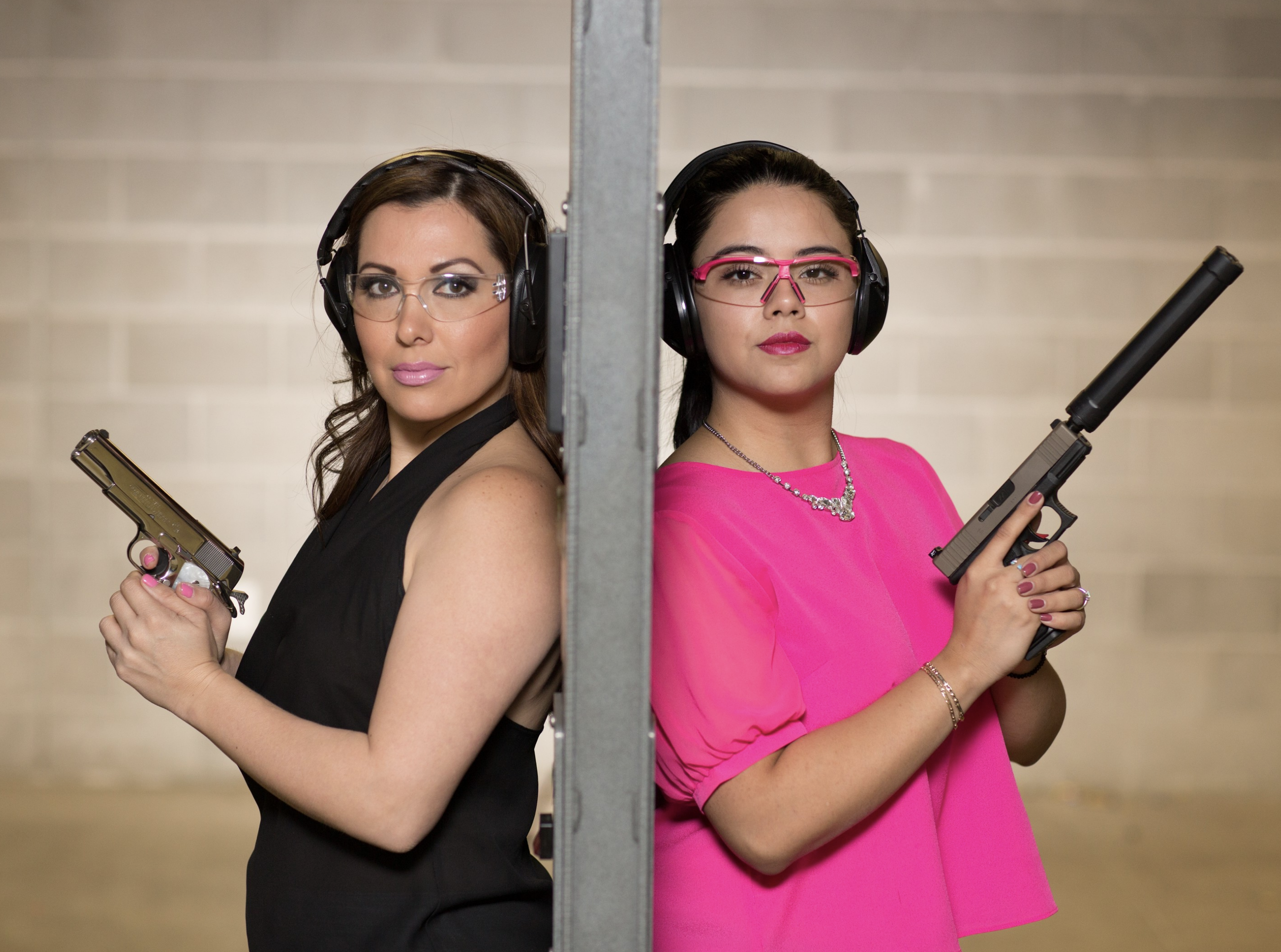 Gun Club Is Not a Guy’s Club

“Shooting is often perceived as a male thing but it’s not; it’s for anyone who enjoys it,” Gallegos Jr. said.  “Sometimes women have been raised with the idea that it’s ‘dad’s gun’ or ‘brother’s gun,’ but you can go online and see that there are women competing in these professional leagues and competitions.”

As for Point Blank, Gallegos says they have many groups of young women who come and shoot, like some Girl Scout troops who use Point Blanks archery range, and they’ve seen leagues form as well.

“We have a lot of regulars, but we see new people every day — and we see everything,” said Rafael Guerrero, who has been working with Point Blank since it opened. “Father-daughter moments, couples on dates, ladies meeting up, entire families having an outing. … We’ve done bachelor and bachelorette parties, and we’ve even had a proposal here, and wedding pictures taken in the range.” Point Blank wants to be as inviting as possible to share their love of sharp shooting with as many people as possible, from long-time hobbyists to the greenest beginner.

Learn to Conquer the Fear

First time shooters might be a bit timid around firearms, but Gallegos says it’s like driving a car — the more you practice, the better you get. “You just have to come, have someone teach you,” he said. Point Blank offers first-time shooter courses that cover basics like stance, grip, and safety, followed by practice and implementation of everything you learned in the range.

“You don’t have to take the course; most first-time shooters usually come with an experienced shooter: a friend, brother, father who brings them here and they practice together for the first time,” Gallegos said. However, he mentioned that sometimes, for whatever reason, it’s easier to learn from someone you don’t know personally.

Gallegos says that it’s not uncommon for first-timers who said that they are scared or don’t like guns to come out of the range for the first time after the class smiling. “That’s what we like to see,” he said. “First-time shooters often find that they love it and discover their new hobby. It’s a good way to relax for a lot of people; it’s how they de-stress after a long week. Some people have game night — others come out and shoot with their friends.” 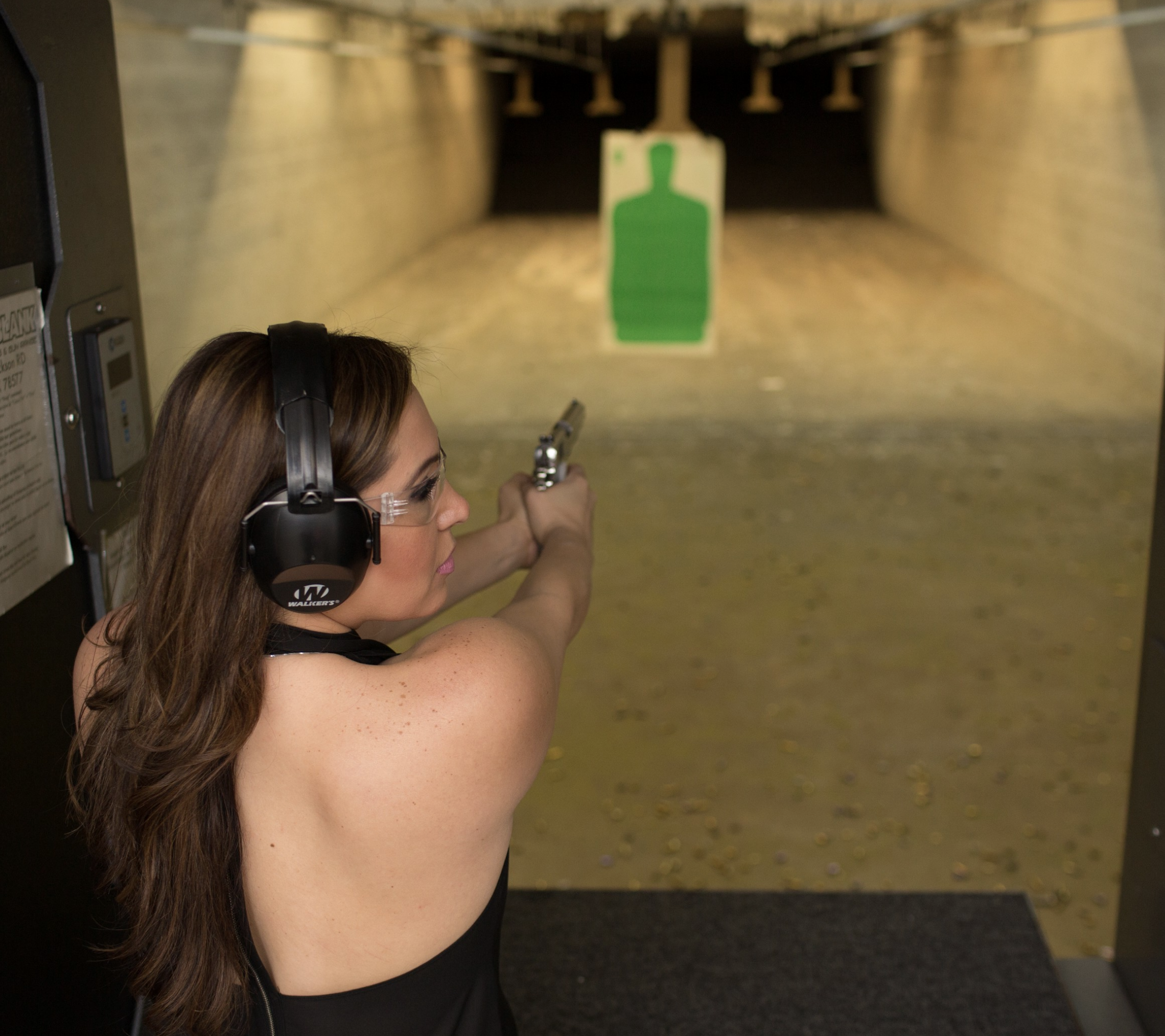 “We also see groups of women — more experienced shooters who have been shooting since they were younger — who want to try something new,” Gallegos said. “They come in with their own guns, try out each others’ guns, and since part of Ladies Day is free handgun rentals, they can practice with even more types.” Point Blank has a wide variety of guns and bows that can be rented and tried out in the range. “A very popular one right now that people want to try out is the Glock 42. They get the chance to see if it’s comfortable for them,” he said.
Catherine Wilson had her first shooting experience at a Ladies Day in April, coming in on a whim after seeing it announced on Facebook. “I don’t like to do the same thing all the time,” she said. “I want to do something original and have fun doing it. I’m kind of nervous, but I guess we’ll find out how good my aim is.”

Though she intended to shoot for fun, Wilson found herself thinking seriously about self-defense while preparing her target before her turn in the range. “If I maybe do decide to get a gun for my household, I could learn how to use it here and then be able to protect my family,” she explained. “It’s something I’m looking into so I’m going to keep coming and see what guns I like and then I’ll decide later down the road.” The more she practices, she will be better prepared should she ever need to use her shooting skills in a defense situation.

Iliana Hernandez had the mirror experience to Wilson; Hernandez had initially stopped by Point Blank for defense reasons, but after shooting for fun with her husband and son, she decided to come back every Tuesday. “We have my husband’s guns at home so I decided to learn to protect myself,” said Hernandez, who had never done any sort of personal defense previously. “When it’s just me and the gun, and I’m taking aim, I feel confident — empowered.” Hernandez says she has found her new de-stressing activity. “I’m super proud of myself. Today, my first eight rounds were all in the middle,” she said. “I guess I’m a natural.”