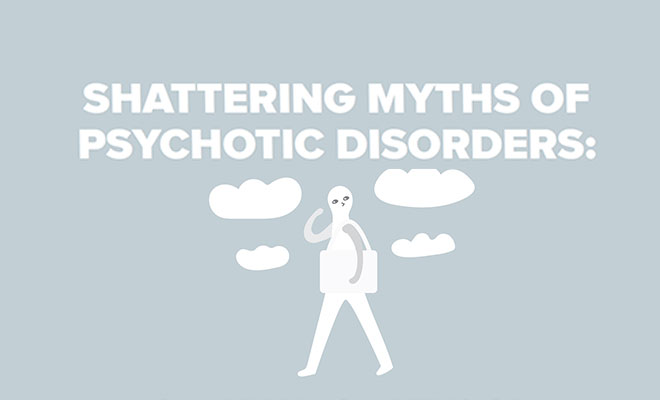 Psychotic disorders are marked by a loss of contact with reality, irrationality, and distorted perceptions. Those who have such disorders experience a range of extreme symptoms that come in various forms, which includes positive and negative symptoms. Positive symptoms can be described as the presence of specific behaviors and symptoms manifested in the forms of

> hallucinations — hearing, smelling, feeling, or tasting things that are not real;

> delusions — believing things that are not true even when evidence that contradicts their beliefs are presented; and

On the other extreme are negative symptoms, or the absence of appropriate behaviors. Some examples of negative symptoms include catatonic behaviors such as an individual’s reduction in reactivity to the environment, and having a flat affect, which is where an individual speaks in a toneless voice and remains expressionless. Activities of daily living are also affected.

Schizophrenia is a mental illness that affects the way that an individual thinks, feels, and behaves. This disorder usually develops in men in their early 20s and women in their late 20s. These individuals may have trouble deciphering what is real and what is not and have difficulty expressing emotions in social situations. Additionally, schizophrenia is not the same as split personality/multiple personality disorders, and the majority of these individuals are not a danger to others. In fact, they are more likely to be the victims of violence.

It is estimated that schizophrenia affects over 23 million people worldwide, and it typically manifests more on males (12 million), than females (9 million). According to a study on prevalence rates of this disorder on ethnocultural groups showed that Latinos (13.6 percent) and African Americans (15.3 percent) had higher lifetime prevalence rates of schizophrenia in comparison to whites (9.7 percent). Additionally, the prevalence rates of schizophrenia in the lower Rio Grande Valley are below 1 percent in the adult population. It is still important to become educated and understand the reality of psychotic disorders. It is easy to dismiss these individuals as “crazy” or believe that their symptoms aren’t real; however, this is far from the truth. Therefore, the first step is understanding what schizophrenia and psychotic disorders are and the symptoms they entail.

There is not one sole cause of schizophrenia. Traumatic experiences might trigger a psychotic episode. For example, acute schizophrenia is when an individual rapidly/suddenly develops schizophrenia after experiencing a stressor such as losing a job or home, a divorce, or physical, sexual, or emotional abuse. Other causes may include: a traumatic brain injury, brain tumors, family history of psychotic disorders and mental illness, and chemical and psychoactive substance usage. Increase levels of dopamine has also been associated with psychotic symptoms.

The media portrays this population in a negative light contributing to the already high stigma.

It is imperative to understand that psychotic disorders are in a spectrum, meaning that symptoms can range from severe avolition and asociality, lack of independence and/or social skills to self-dependent patients including prominent doctors, lawyers, teachers, or writers. With proper treatment, symptoms can be stabilized, allowing patients to precisely live an independent and stable life. Treatment can include medication in the form of neuroleptics (also known as antipsychotics), benzodiazepines (commonly prescribed to reduce anxiety and/or disturbed behavior), and/or a form of psychotherapy.

Various forms of psychotherapies have been utilized to treat this population. For instance, Cognitive Behavioral Therapy (CBT) has been shown to be effective in treating negative symptoms and associated anxiety or low self-esteem in patients with psychotic disorders. Other forms of psychotherapy are aimed to improve the quality of living and include Cognitive Remediation Therapy, and Cognitive Enhancement Therapy. They have been shown to be effective in independent living skills, vocational, and/or social skills.

Given that hallucinations are a critical component for a diagnosis of a psychotic disorder, it is equally imperative to account for culture and cultural values. Phenomena such as hearing voices from a deity or fellow members of one’s kin can be influenced by religion and/or culture and would therefore not qualify as a hallucination. Among Latinos, psychotic disorders have been identified to differ when compared to other groups. Atypical psychotic symptoms include sound of knocking at the door, a voice, and faces of dead relatives, among others. However, said symptoms are not clinically relevant and may be influenced by culture. Treatment for Latino groups must take in consideration the acculturation, time of living in the United States, and personal beliefs to optimize treatment.

Tips for Families and Individuals

Understanding how to support someone who has this medical condition or their family members is important.

It is also important to note that the individual is a person who should not be defined by their diagnosis. People with schizophrenia still hold their individuality regardless of the symptoms they have. Their delusions and hallucinations are only a symptom of their medical condition. It is not who they are. A person is not schizophrenic.