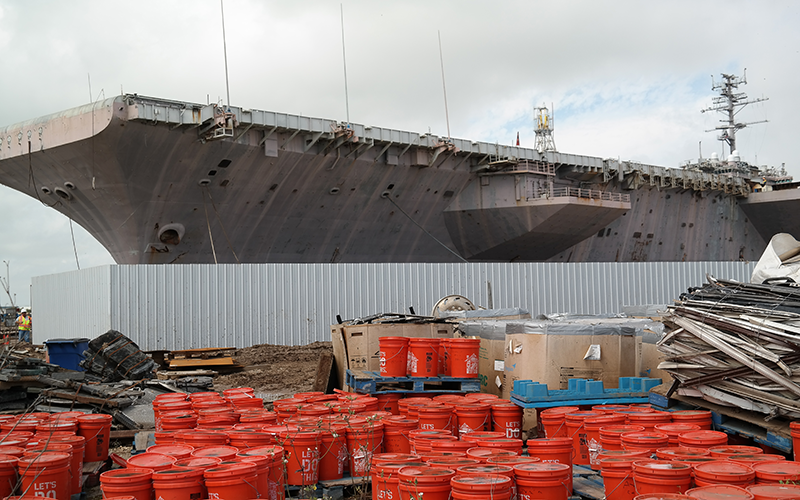 The Port of Brownsville has emerged as the one of the premier facilities in the world for the dismantling of maritime vessels, according to its director.

More than 80 percent of all maritime fleet and merchant marine vessels used by the government that are put out for scrapping wind up at the Port of Brownsville, creating hundreds of jobs, according to Port director Eduardo Campirano.

“You know, ports develop niches. Harlingen has the niche of the sugar trade on barges because of the sugar mill,” Campirano said.”One of the niches that the Brownsville Port has developed over time is in ship recycling. That word has evolved. It used to be the ship dismantlers, then it became the ship breakers, now it’s the ship recyclers.”

Recently, the first of the aircraft carrier fleet to be recycled, the “Forrestal” class arrived in Brownsville last year. In February 2014, the Port received the USS Forrestal. In August of 2014, the USS Saratoga arrived for dismantling. On Jan 16, the Brownsville Port received its largest vessel ever, the USS Constellation.

Later this year, possibly by late summer or fall, the Port will see the USS Ranger arrive for recycling. The USS Ranger, which was used extensively in the Vietnam War, was made famous as the aircraft carrier used in the 1986 film Top Gun.

“Four of five military vessels that are put out or recycling winds up here,” Campirano said. “That tells you the port has a pretty significant role in accomplishing the U.S. government’s desire to safely dispose of these vessels, and of course the steel off of these vessels is a lucrative trade.”

On average, more than 200 people per vessel are required for two years to complete the dismantling.

Steel, which is a byproduct of the ship recycling business, comprises the majority of the dry bulk commodity at the Port. In 2014, the Port moved almost 2 million tons of slab steel, right behind Houston and New Orleans. Steel related commodities at the Port include iron ore, pig iron and scrap steel.

As Mexico increases its manufacturing base, that impact affects the region, Campirano said. Many of the commodities that come into the Port  travel south to support Mexico’s burgeoning manufacturing sector. Steel that comes into the Port is carried by rail into Monterrey, Mexico to serve the steel mills there.

“We essentially are the premier destination for that industry in the United States. Because the US does it better than anybody else in the world, guess what, the Valley does it better than anybody in the world,” Campirano said.  “In regards to the ship recyclers, a lot of that steel that comes out of those vessels is not only shipped to other parts of the State of Texas, it’s shipped to other states and other countries in the world.”

The Port has 174 active foreign trade zone active in the United States, and its Foreign Trade Zone led the nation in the value of exported commodities for the second year in a row.

This is symbolic to what is happening across Texas with regards to petroleum, steel and metals, Campirano said.

Keppel AmFELS, which has had a facility in the port for the last 25 years, has led the nation in fabrication of new offshore rigs since 2000 to the present. It’s the company’s premier full-service facility that is considered the largest domestic fabricators of offshore platforms in the United States.

“2014 was the best year we have ever had in terms of total tonnages moved through the Port not only by water borne but also by cargo that moves in by truck or rail. We also move cargo by pipeline.

“This is symbolic of what’s going on at the port environment,” Campirano. “We are all having good years talking about who things are getting better, but the challenge is how to build the infrastructure necessary to keep up.”